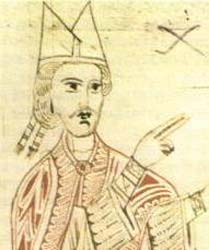 Gregorian reforms are the measures taken by the church reform movement of the 11th and 12th centuries , named after Pope Gregory VII , which was characterized by the struggle against simony , priestly marriage (" Nicolaitism ") and lay investment . In addition to eliminating these abuses, her main concern was the defense of libertas ecclesiae , the freedom of the Church from secular influence. The spiritual center was initially the powerful Burgundian Abbey of Cluny , in which the Cluniac monastery reform arose, which was continued in Germany with the Hirsau reform . With the establishment of the reform papacy , the theological and political emphasis of the movement shifted to the papal curia and was also strongly represented in the canons and cathedral chapters of reform-oriented dioceses. With his decree against lay investiture issued in 1075, Pope Gregory VII, one of the most radical reformists of his time, triggered the so-called investiture controversy. Gregory and his students and successors understood the freedom of the church in the sense of a supremacy of the papacy over secular power, which led to the conflict between Pope and Emperor that shaped the high Middle Ages . The maximum demand, which grew up in his personal conviction and which is also publicly represented with great sense of mission, according to which the Pope, as the successor and immediate deputy of the Apostle Peter , must exercise both spiritual and secular world domination and is to be accepted by spiritual and secular rulers as overlords, formulated Gregor in his Dictatus Papae , which was privately written in 1075 , which, however, remained unknown to contemporaries and was only recognized and emphasized as the essence of Gregorian thought in later historiography. The strived for liberation of the church subordinate to the Pope from its dependence on secular powers went hand in hand with a strengthening of the position of the papacy within the church, which now claimed the so-called primacy of jurisdiction and enforced it in the western church , and a strong centralization of the church organization. To implement their ideas in the individual regional and local churches , Gregory and his successors primarily used the instrument of the papal legates , which are ambassadors appointed directly by the Pope who are only responsible to the Pope and who take decisions on site instead of the Pope and with papal authority and can issue orders to local bishops and princes with papal authority.