Leo IX in a letter collection from the 11th century

Leo IX According to tradition, was born in the middle of the three exes in Alsace , the Wahlenburg . He was a son of Count Hugo VI from Upper Alsace , Count in Nordgau and von Egisheim , and his wife Heilwig, who came from the older Dagsburg in Lorraine . Bruno was a second cousin of the Salian emperor Heinrich III. ; his paternal grandfather, Count Hugo IV, was a brother of Adelheid von Metz , wife of Heinrich von Speyer and grandmother of the emperor.

Under the care of Bishop Berthold von Toul , Bruno trained as a priest and was then appointed to the chancellery of Emperor Konrad II . In 1026, at the age of only 24, he was ordained Bishop of Toul.

Pope Leo IX, statue on the outer wall of the chapel tower on "Le Rocher" in Dabo

After the death of Pope Damasus II in 1048 Bruno was - according to his Vita against his will - the preferred candidate of Emperor Heinrich III. for the succession in the pontificate . At a court conference in Worms , the emperor named Bruno as his candidate and had him elected to a Roman delegation who had come north to settle the question of the succession . Allegedly only on the condition of being canonically legitimized by the people and clergy of Rome, Bruno declared himself ready to take office. After the Roman population had actually confirmed him by acclamation , he settled as Leo IX. to be raised to the Pope. The papal election took place in 1048 in Worms Cathedral .

Leo appeared as a reformer who fought against the practice of awarding church offices, which the reform movement saw as buying office (“ simony ”) , wanted to reduce the influence of powerful laypeople on church affairs and probably also took action against the priest marriage, which proponents of reform called “ Nicolaitism ”. He reorganized the ecclesiastical administrative structures and succeeded in reducing the influence of the Italian clergy in the Curia, who at that time were for the most part hostile to reforms under the influence of the urban Roman nobility. As a counterweight, he began to transform the group of Roman cardinal bishops , which had hitherto had little political significance, into a pillar of papal policy. He also further intensified the synodal activity that was already active among his predecessors .

Through trips beyond Italy, especially in parts of the empire north of the Alps , but also sporadically to neighboring French and Hungarian regions, Leo was present in regions that were previously far removed from the direct influence of Rome. This “travel papacy” made it possible for Leo to consolidate his power and the position of the papacy on the spot, analogous to the mobile rule of the Roman-German kings. The presence of Leo at church dedications and synods, his sermons or his parade through the country itself turned the distant and rather abstract figure of the Pope into a tangible and relevant quantity. His vita describes him as a man of the people; According to an anecdote, on one of his trips B. a leper beggar into his own bed. 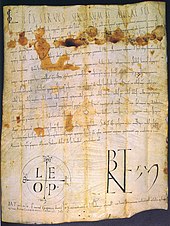 At the 2nd Council of Reims (1049), the Roman pontiff was granted, among other things, the exclusive right to be able to refer to himself as universalis ecclesiae primas et apostolicus ( Latin head and commissioner of the universal church ), thus also facing the newly grown self-confidence of the Latin West the Byzantine East was given expression. Above all, the Reims Council also renewed the ban on simony - like the previous and subsequent synods. Since then, the Pope's Chancellery and the Curia have played a very important role in European legal history.

After the emperor had denied him the support he had already promised, probably at the instigation of Bishop Gebhard von Eichstätt , Leo pursued plans to drive the Normans out of southern Italy with his own army and the support of Eastern Europe . These were once brought to southern Italy by the Lombard principalities to fight the Saracens . In the meantime, however, they themselves had become a threat to the established powers, which is why some Lombard cities had already placed themselves under the protection of the Pope.

At the instigation of the Byzantine emperor Constantine IX. Monomachus (1042-1055), who was interested in an alliance against the Normans, negotiated the restoration of ecclesiastical unity between the Patriarch Michael Kerullarios and the Roman cardinals Humbert of Silva Candida and Friedrich of Lorraine . The agreement failed because of the intransigence of the negotiating partners on liturgical and dogmatic points.

Thereupon Cardinal Legate Humbert of Silva Candida excommunicated the followers of the Orthodox Church in the name of Leo in 1054 by laying a bull of excommunication on the altar of Hagia Sophia in Byzantium , which in the long term caused the division of the Christian Church . However, during his lifetime, Leo did not learn of the final defection of the Orthodox from the Roman Church. Because after a defeat of his army against the Norman troops in the battle of Civitate ( Apulia ) on June 18, 1053 Leo was taken prisoner. He was held in Benevento for nine months . Released seriously ill, he died - possibly of malaria - on April 19, 1054 in Rome.

Leo IX was immediately venerated as a saint after his burial in St. Peter's Church in Rome . He is considered to be the most important of the five "German" popes who emerged from the imperial church between 1046 and 1058. His relics can be found in St. Peter's Basilica, in the Alsatian parishes of Eguisheim ( St. Leo IX chapel ) and Bouxwiller as well as in the St. Leo Chapel in Dabo (Lorraine).

Leo IX is the patron saint of musicians and organists. In the regional calendar for the German-speaking area , the Catholic Church lists April 19 as an unavailable day of remembrance .