This article describes the literary term "Vita"; for other meanings of the same name, see Vita (explanation of terms ) , for educational use see curriculum vitae , for medical use see vitality . 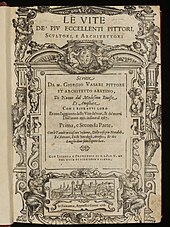 A Vita ( f , from Latin vita 'life', pl. Vitae, Viten) is generally the literary description of the life of a well-known personality and belongs to the literary genre of biography . Traditionally, ancient and medieval biographies are called vitae (or vitae ). The saints' lives are a common form .

While in more recent linguistic usage a vita can be limited to the simply documented résumé - the Duden defines, for example, an educational use for “life, résumé, life story of a person” - in the past the main function of most vitae was more like a laudation in emphasizing the Virtues of their heroes and less in a historically reliable description of life. They should give the readers or listeners moral guidance for their own lives or underpin certain values.

In antiquity there were initially vites of philosophers and writers , later the vites mainly described the lives of generals and statesmen. The word Vita appears for the first time in the work De viris illustribus by Cornelius Nepos . Plutarch's depictions of Greek and Roman statesmen and Suetons De vita Caesarum had an important influence on the development of the literary form .

Build on the ancient scheme in the Middle Ages one hand Fürstenviten such as Einhard Vita Karoli Magni (830) or a Vita Emperor Charles IV. On the other hand, saints and Märtyrerviten as the Vita Sancti Martini of Sulpicius Severus or Vita Benedicti Gregory the Great .