Giovanni Boccaccio ( [d͡ʒoˈvanːi boˈkːat͡ʃːo] ; born June 16, 1313 in Certaldo or Florence , † December 21, 1375 in Certaldo) was an Italian writer , democrat, poet and important exponent of Renaissance humanism . His masterpiece, the Decameron , portrayed the multifaceted society of the 14th century with a hitherto unknown realism and wit and made him the founder of the prosaic narrative tradition in Europe. 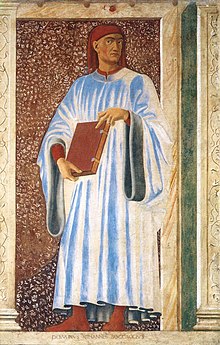 The exact circumstances of his birth are not certain. Boccaccio was born in 1313, probably in Florence or in the nearby mountain village of Certaldo , as the illegitimate son of the merchant Boccaccio di Chellino. His mother died shortly after giving birth. Later the legend, quoted in many sources and promoted by himself and still unproven today, came up that he was born in Paris , a result of a relationship between his father and a French nobleman named Giovanna.

The years spent in Naples (until 1340) had a major impact on Boccaccio's personal and intellectual development. Instead of engaging in the study of commercial activity or canon law, as the father had wanted, he devoted himself to his passion for literature. He gained access to the Neapolitan court of Robert of Anjou , where he got to know the elegant, courtly lifestyle, associated with intellectuals and self-taught a wide range of education.

It was also during this period that he wrote his first works in verse and prose, in which Boccaccio experimented with different genres and styles. In keeping with the taste of the time, he designed the recurring image of an ideal lover whom he called Fiammetta and whose real model is probably a Neapolitan noblewoman named Maria d'Aquino .

In 1340 he returned to Florence. Due to financial difficulties, he entered the civil service and held several offices. Between 1345 and 1346 he went to the court of Ostasio da Polenta in Ravenna , while the next year he was in the service of Francesco Ordelaffi in Forlì . The bourgeois-urban environment, very different from court life, was an important source of inspiration for his fruitful literary activity in that decade that culminated in the Decameron , written in the years after the plague epidemic that struck Italy in 1348.

His masterpiece was certainly already completed when he first met Francesco Petrarca in the autumn of 1350 . Boccaccio made a deep friendship with him. Both had a common admiration for classical authors, as their correspondence shows, in which they exchanged literary experiences.

Now that his fame had grown, the Florentine city council entrusted him with various diplomatic assignments that took him on many journeys.

During these years Boccaccio devoted himself - also influenced by his friend Petrarca - to his study of classical texts. Around 1355 he got free access to the library of Montecassino , where many masterpieces from antiquity had survived. Boccaccio even copied some of the precious codices by hand.

Soon a circle of intellectuals emerged around Petrarch and Boccaccio, who rediscovered some important classical works, including the Annals of Tacitus and the Metamorphoses of Apuleius .

After Boccaccio began studying Greek around 1360, he managed to have the first chair set up in Florence. This was checked in Leontius Pilatus awarded the Boccaccio beyond the translation of the Iliad and the Odyssey of Homer entrusted into Latin. These works could therefore be read by a much wider audience.

His interest in antiquity also influenced literary production towards the end of his life. In the later years of his life he wrote less narrative texts held in Volgare , but more works in Latin that dealt with encyclopedic or philological topics.

This change may also be due to a religious crisis in Boccaccio's life. This is said to have been so profound that Boccaccio even wanted to destroy some of his works that he now believed to be immoral. However, he could be held back by Petrarch. This representation is called into question by the fact that he was still making copies of his Decameron by hand around 1370 . He had already entered the minor clergy in 1360, although probably due to financial hardship. Finally, in 1362 he met the Carthusian monk Gioachino Cianni from Siena , who converted Boccaccio to a "pious life".

In 1373 he, who had already sparked the cult of Dante Alighieri with his biography of Dante twenty years earlier, was instructed by the city of Florence to read, explain and comment on the Divina Commedia publicly . In 1374, however, his health deteriorated due to a probable hydropsia and so he had to stop this activity.

He eventually settled in Certaldo and worked on some works until his death on December 21, 1375.

In 2013, on the occasion of his 700th birthday, a 2 euro commemorative coin with his portrait in three-quarter profile was released . This is taken from the fresco by Andrea del Castagno . 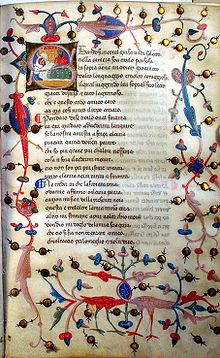 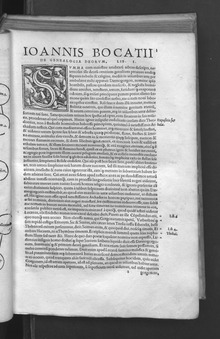