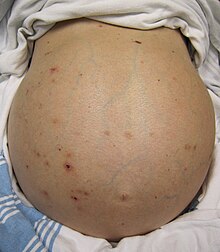 Ascites caused by cirrhosis of the liver

The ascites (also ascites , from ancient Greek ασκίτης askítēs ) is the medical name for an excessive accumulation of free, usually clear serous fluid in the abdominal cavity , more precisely in the peritoneal space ; other terms for this accumulation of fluids are hydraskos , ascites , or water belly .

In healthy people, the peritoneal space only contains around 50 to 70 milliliters of fluid. In some diseases such as B. in cirrhosis of the liver , the amount increases significantly; that is why one spoke earlier (according to Hippocrates ) of dropsy of the liver . At a malnutrition with insufficient intake of proteins also from is hungry belly ( Kwashiorkor ) spoken.

Smaller amounts of ascites are usually symptom-free . Only larger volumes are noticeable as swelling of the abdomen, which is usually painless.

Common to all causes is the passage of fluid from the blood vessels into the peritoneal space. Ascites, along with hepatic encephalopathy and esophageal varices, is one of the life-threatening complications of decompensated liver cirrhosis . At around 75%, cirrhosis of the liver is also the most common cause of ascites, as it leads to fluid leakage from the blood vessels by increasing the pressure in the portal vein circulation . Ascites can also occur with acute liver damage. Likewise, an occlusion of the venous sinuses of the liver z. B. in Budd-Chiari syndrome lead to the formation of ascites. Ascites can also occur with heart failure or constrictive pericarditis . Liver tumors or metastases in the abdomen can also cause fluid to accumulate. In the case of perforations in hollow organs, secondary peritonitis (inflammation of the peritoneum) also leads to the formation of free fluid in the peritoneal space. A tuberculosis can cause chronic such ascites. Also, a can pancreatitis or fistulas result of the biliary or pancreatic system to the formation of ascites. In severe malnutrition, ascites often occurs due to a lack of albumin .

Large amounts of ascites around the liver

In order to clarify why ascites has formed, a puncture of the peritoneal space and examination of the fluid is mandatory.

The ascites is usually a clear liquid. Milky ascites indicates an injury or disruption of the lymphatic drainage (for example due to trauma), but can also occur in other diseases. Dark brown ascites often gets its color from a high proportion of bilirubin and is indicative of a bile leak. Black ascites can indicate necrosis of the pancreas or metastatic melanoma.

The protein content of the ascites can provide an indication of the genesis. If the protein content exceeds 2.5 g / dl (= exudate ), there is inflammatory ascites, if the value is below 2.5 g / dl (= transudate ) there is a non-inflammatory ascites. Alternatively, the albumin content of the ascites can be related to the albumin content of the blood. If this serum ascites albumin gradient (SAAG = serum albumin concentration minus ascites albumin concentration) is more than 1.1 g / dl, it can be assumed that the ascites is caused by high blood pressure in the portal vein. A gradient of 1.1 g / dl to 2.5 g / dl suggests the presence of liver cirrhosis , the late form of Budd-Chiari syndrome or massive metastasis of the liver. A gradient increased to over 2.5 g / dl suggests ascites formation in the context of heart failure or early Budd-Chiari syndrome. A SAAG of less than 1.1 g / dl speaks against a genesis of ascites in the context of portal hypertension. This can occur in the context of pancreatitis , peritoneal carcinosis , bile leakage, tuberculosis or nephrotic syndrome . A laboratory test for cell counts can detect spontaneous bacterial peritonitis . Microbiological and cytological examinations are also useful. Further complications of liver cirrhosis caused by high blood pressure in the portal vein are variceal bleeding and hepatic encephalopathy.

A dangerous complication of ascites is spontaneous bacterial peritonitis (SBP): in about 15% of patients with portal ascites (ascites due to an increase in pressure in the portal vein as in liver cirrhosis ), intestinal bacteria migrate from the intestine with subsequent peritonitis. The most common pathogens are Escherichia coli (50%), gram-positive cocci (30%) and Klebsiella (10%). The patients usually have neither fever nor abdominal pain; ascites puncture helps diagnose, with over 250 granulocytes / µl. The germ detection is often not successful. Nevertheless, SBP is associated with a high mortality rate of up to 50%. Therapy: third generation cephalosporins , then relapse prophylaxis with oral fluoroquinolone .

A more recent microbiological study, however, refutes the assumption that the bacteria responsible for SBP are exclusively members of the intestinal flora. Bacteria were also detectable before the symptoms of SBP appeared. The exact mechanisms that lead to colonization of the peritoneum are therefore largely unclear.

Mild ascites can be treated with sodium restriction. The administration of spironolactone , an aldosterone antagonist, has also become established in portal ascites . Electrolytes and weight must be checked regularly, and a fluid balance should also be drawn.

Moderate cases are treated with the addition of a loop diuretic , e.g. B. furosemide treated. The flushing out should be done gently, ie no more than 500 g weight loss per day in order to prevent the development of a hepatorenal syndrome.

Severe, therapy-refractory courses can also be treated with paracentesis , i.e. aspiration of the fluid, with simultaneous administration of albumin and subsequent prevention of recurrence with diuretics (drugs to increase kidney excretion). In this method, the effusion is punctured through the abdominal wall and drained. Since the ascites usually forms again quickly, this method must inevitably be repeated. The doctor can do this on an outpatient basis. Disadvantages are that with each repetition there is a risk of bleeding, bacterial infections of the abdomen and injuries. It has been shown that the pain and discomfort often cause patients to delay the puncture until symptoms are unbearable. As an alternative to continuous punctures, the placement of a thin drainage tube (PleurX ascites) in the abdominal cavity has recently proven its worth. The part of the silicone tube in the abdomen has several holes through which the effusion can enter the catheter. Outside the abdominal cavity, the tube runs in the subcutaneous fatty tissue to prevent bacterial inflammation. At the end of the hose there is a valve that prevents air from entering and liquid from escaping if the patient or the nursing staff is not actively relieving the pressure. The discharge of the effusion takes place with a vacuum bottle that is connected to the catheter via a special valve. When the clamps on the drainage bottle are opened, fluid can be actively and quickly drained from the abdomen. Most patients can do this themselves after a briefing. The catheter can be placed on an outpatient basis with local anesthesia; draining the ascites itself is painless. A TIPS (transjugular intrahepatic portosystemic (stent) shunt), i.e. a connection between the portal vein and the lower hollow artery, can also be created. However, this then leads to an almost unhindered flow of the substances normally broken down by the liver into the body's circulation. The organ, which is already restricted in its detoxification function in cirrhosis of the liver, loses the ability to metabolize toxins such as ammonia . This increases the risk of further complications, such as portal hypertension or hepatic encephalopathy . Recently published study data also show a reduction in the risk of additional liver cirrhosis complications such as spontaneous bacterial peritonitis (SBP) or variceal bleeding in the context of treatment for hepatic encephalopathy .

Another option for liver cirrhosis is a transplant . However, there are not enough organs available. At the end of 2017, around 2,000 patients were on the waiting list for a liver transplant - while only 823 patients actually received a donor liver.

Malignant ascites is often treated with repeated paracentesis . In addition, shunts and chemotherapy are used, some of which are administered directly into the peritoneal space ( intraperitoneally ), as well as the antibody catumaxomab, which is specially approved for the treatment of malignant ascites .

Two scientific studies from 2011 and 2013 show as an alternative to paracentesis in malignant and non-malignant ascites the placement of a catheter tunneled into the subcutaneous fat tissue. The patient, their relatives or the nursing staff can drain the ascites in the home environment.