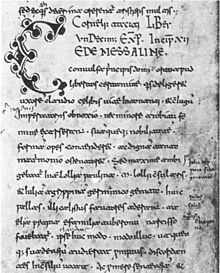 Tacitus, Annales (end of the 11th and beginning of the 12th book) in the manuscript Florence, Biblioteca Medicea Laurenziana , Plut. 68.2, fol. 6v (2nd half of the 11th century)

Annales (" Annalen ") is the usual title of the second great historical work (besides the histories ) of the Roman historian Tacitus . The handwritten title, however, is Ab excessu divi Augusti ("from the death of the divine Augustus").

In the 9th century, the first six books of the Annales were copied in the Fulda monastery . A copy reached the Corvey Abbey near Höxter as an original manuscript , where it was rediscovered in 1508 by a secular scholar and was later stolen on behalf of Italian humanists . Pope Leo X came into possession of the copy and had it published. It is now in the Biblioteca Medicea Laurenziana in Florence and is sold under the code Codex Mediceus I = Codex Laurentianus Plut. 68.1 led. Books 11–16 are handed down as an original manuscript in a manuscript from the Monte Cassino monastery from the 11th century, which probably also came from Germany and is now in the Laurenziana and the Sigle Codex Mediceus II = Codex Laurentianus Plut. 68.2 , this manuscript is also the original manuscript for the " Histories " of Tacitus.

The work consisted of 16 (possibly also 18) books. It dealt with the time from the death of Augustus and the accession of Tiberius to (probably) the death of Nero . Books 1 to 4 and 11 up to the beginning of book 16 are completely preserved, with the beginning of the 11th and the end of the 16th book missing. Books 5 (very fragmentary) and 6 are partially preserved. The gaps in the work cover the years 29–31, 37–47 and 66–68 AD.

The Annales were published between A.D. 110 and 120 and were intended to cover the period prior to the period covered in the Histories . They are the last and most mature work of Tacitus ( Manfred Fuhrmann ), stylistically probably unsurpassed. The work is the culmination of Roman annals and senatorial historiography . In later times, however, the biographical presentation, which with Suetonius had a powerful effect in Roman historiography, gained the upper hand. Only Ammianus Marcellinus linked up with Tacitus again. 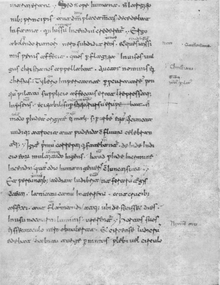 Even if Tacitus in his own words strives for an objective description without partiality in his work ( sine ira et studio , 1, 1, 3), he is nonetheless partly very partial, especially with regard to the reign of Tiberius. Modern research has largely corrected the image of a gloomy tyrant given in the Annales . Tacitus apparently still adhered to the old ideal of a res publica libera and criticized the empire in general. His admiration was for the old republican Rome , although he did not indulge in the illusion that the republic was to be restored, especially since the principate also put an end to the chaos of civil wars, which Tacitus recognized very well. In general, the view of history is nevertheless characterized by a very strong pessimism, whereby he laments the moral decline of his time and the loss of freedom, which was granted to only a minority in the republic.

The representation in the Annales alternates again and again between the situation in Rome and at court as well as the representation of foreign policy, especially the campaigns against the Teutons under Germanicus ( Germanicus campaigns 14 to 16 AD) and the policy towards the Parthians . However, the source situation for this is extremely problematic, as Tacitus only provides relatively seldom information. However, he apparently used several (now lost) sources, including archive material, the lost histories of the older Pliny and his work on the Germanic Wars in 20 books, which has also not been preserved. In addition, among other things, the memories of Agrippina and probably the historical works of Fabius Rusticus and Cluvius Rufus . The histories of Aufidius Bassus and the work of Servilius Nonianus also come into question .