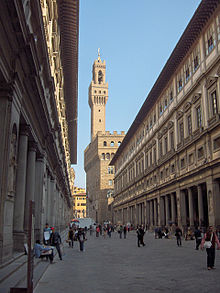 The Uffizi Gallery: View from Palazzo Vecchio towards the Arno

Uffizi from the Arno, behind it Palazzo Vecchio

The Uffizi ( Italian uffici , offices ) are a complex of buildings originally built from 1560 to around 1580 to accommodate ministries and offices in Florence . Architects were Giorgio Vasari , Bernardo Buontalenti and Alfonso Parigi the Younger (1606–1656).

The building has housed the Galleria degli Uffizi art collection since it began around 1580, with works of painting and sculpture from antiquity to the late baroque . They are considered one of the most famous art museums in the world and have been open to the public from the start. With around 2 million visitors, the museum is one of the city's main attractions.

Cosimo I de 'Medici , Grand Duke of Tuscany, began in 1560 with the implementation of a long-standing plan to combine the most important ministries and offices (the so-called uffici ) in one building. For the new building, an entire district was demolished or integrated into the new building, such as B. the Romanesque church of S. Piero Scheraggio and the Zecca minting workshop , in which the so-called gold florin were made. Vasari unified the collection of old and new buildings by means of front facades. A square was created, flanked by two almost identical facades, which connects the Piazza della Signoria and the banks of the Arno . The exterior of the building was completed by Bernardo Buontalenti and Alfonso Parigi by around 1581 after Vasari's death in 1574 .

Francesco de 'Medici , Cosimo's successor from 1574, had set up a room for his art collection in the Palazzo Vecchio as early as 1570 (the Stanzino del Principe). In 1580–1588, Buontalenti built the famous Tribuna on the upper floor of the Uffizi for the presentation of other works of art, a room on an octagonal floor plan that was open to the public. At the same time , the collection of works of art in family ownership was presented in the archway on the upper floor, the galleria ; it could be reached from the Palazzo Vecchio , the official residence of the duke, through a connecting corridor across the street . Various ancient sculptures from Rome, which were initially exhibited in the garden of the Villa Medici , found their final place in the Uffizi. The most famous piece is the so-called " Medicean Venus "; it was found in 1618 in the villa of the former Roman emperor Hadrian ; the type of Venus pudica , which she embodies, was inspired by an original by the Greek Praxiteles in the 4th century BC and later had a powerful impact on artists such as Pisano or Botticelli .

The Medici supplemented their collection with other works of painting and sculpture until 1737, when Gian Gastone de 'Medici, the last of their grand dukes, died. Anna Maria Luisa de 'Medici , the last representative of the Medici family, bequeathed the Medici personal property to the city of Florence on the condition that it was never removed from the city. After her death in 1743, the collections were made accessible to the public. In the 18th century, the Uffizi collection had already achieved fame beyond Florence through reports from visitors; Art historians have therefore repeatedly called it the first museum in Europe. The origin of the term gallery for a collection of paintings is also attributed to the Uffizi galleries.

On the ground floor there were workshops of craftsmen who worked for the Medici royal court. Before the end of the 17th century, they included the instrument maker Bartolomeo Cristofori , who was recruited to Florence and who in around 1698 developed the prototype of the piano from the harpsichord through the development of the tactile mechanics - the Uffizi is thus the birthplace of the piano.

On May 27, 1993, a Cosa Nostra car bomb exploded in Via dei Georgofili next to the Uffizi Gallery . Five people died, and a large part of the Niobe Hall, including the sculptures on display and the frescoed ceiling , was badly damaged.

The Galleria degli Uffizi painting collection , which focuses on works of the Italian Renaissance , is now housed on the third floor of the building . The collection also includes paintings from the 13th to 18th centuries. Century and many works by Flemish, Dutch, French and German artists of the time. An extensive exhibition of self-portraits from all eras up to the present day can be seen in the Corridoio Vasariano . This part of the building, also built by Vasari, connects the Uffizi on one side with the Palazzo Vecchio and on the other side via the Ponte Vecchio with the Palazzo Pitti . On the second floor is the collection of drawings and prints founded by Leopoldo de Medici in the 17th century. In addition, the remains of a Romanesque church can be viewed on the ground floor , which Vasari had largely demolished to make room for the construction of the Uffizi.

A special charm of the Uffizi collections lies in the arrangement of the halls, in that those who are initially ignorant of art can be found in a historical sequence, starting with sculptures from Greek and Roman times, through the use of art for religious purposes (icons) Painting of the Renaissance (liberation from the requirements of the Church) and the modern age convey a largely chronological outline of the entire painting and sculpture, and thus give him a logical, comprehensible introduction to sculpture, painting and the history of art in Western Europe.

The collection includes the following paintings:

The director of the Uffizi is subordinate to the Soprintendenza Speciale per il Patrimonio Storico, Artistico ed Etnoantropologico e per il Polo Museale della città di Firenze. The museum directors in recent times: