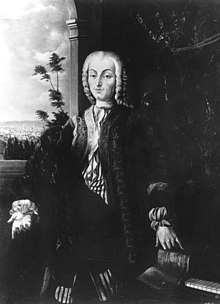 Bartolomeo Cristofori (born May 4, 1655 in Padua , † January 27, 1731 in Florence ) was an Italian musical instrument maker . He is considered the developer of the piano .

Bartolomeo Cristofori was born on May 4th 1655 as the son of Francesco Cristofori in Padua, part of the Republic of Venice . Little is known about his early life. 1690 he was by Ferdinando de 'Medici , the son of the Tuscan Grand Duke Cosimo III. de 'Medici , brought to his court in Florence as an instrument maker and tuner. During this time, Cristofori began working on a new attack mechanism that would allow dynamic play. The inventory of musical instruments from 1700 lists an arpicembalo che fà il piano e il forte - a harpsichord that can be played at different volumes - which is usually dated to 1698 and can be considered the first piano . It had a range of four octaves . Even after Ferdinando's death in 1713, Cristofori stayed at the grand ducal workshop, made other pianoforte and refined their technique.

In addition, he restored some valuable older harpsichords and developed two new keyboard instruments, the spinettone (a large spinet with several registers) and a representative oval spinet, the bass strings of which were arranged in the middle.

The source material available today on Cristofori's life consists of his birth and death certificates, two wills , the invoices he issued to his employers, and a newspaper article with an interview by Scipione Maffei , whose comments have also been preserved.

The basis for the dynamic playability of the hammer piano was a sophisticated mechanism in which a hammer was thrown against the string by a jack and immediately released it to swing freely. When the key was pressed, a damper was raised which, when the key was released, intercepted the vibrating string. Cristofori stretched two equally tuned strings (a so-called choir) next to each other to allow a higher volume.

In particular, it was new that the volume could be infinitely adjusted from soft (Italian: piano ) to loud (Italian: forte ) through the effort ; Accordingly, the instrument was christened pianoforte , from which the short form piano is derived.

In 1726 Cristofori had completed his instrument. Today there are still three originals. One is in Leipzig , one in Rome and one in New York . A total of ten instruments of various types have been preserved from his workshop.

The first collection of sonatas composed especially for Cristofori's fortepiano was by Lodovico Giustini .