The title of this article is ambiguous. Further meanings are listed under Tuscany (disambiguation) .

The Tuscany ( Italian Toscana , formerly Etruria ) is a region in central Italy . It borders Liguria and Emilia-Romagna to the north, the Marche and Umbria to the east and Lazio to the south . Tuscany is considered a historical landscape, an important cultural landscape and heartland of the Renaissance .

Their name is derived from the Etruscan people who lived there in antiquity .

Tuscany is known for its hilly landscape, which is particularly characterized by the many pine trees , columnar cypresses , olive trees and vines . Its highest mountain is the Monte Prado (2054 m). Tuscany has forest areas of 10,000 km 2 . In the south there is a large nature reserve, the Parco dell'Uccellina , with exceptionally rare flora and fauna.

The best-known and most popular landscapes in Tuscany include the Maremma in the south, the Chianti region between Florence and Siena as well as the Versilia coast in the north-west and the Etruscan Riviera, which stretches from Livorno to Piombino along the Tuscan coast. In the north, Tuscany is bounded by the Apennines, whose mountain ranges as the Apuan Alps reach a height of almost 2000 meters and in the Appennino Tosco-Emiliano of over 2000 meters. More landscapes are the area of the Amiata , the Mugello , the Valdichiana (Valdichiana), the Lunigiana and Garfagnana , the Val d'Elsa (Val d'Elsa) and Val d'Orcia (Orcia Valley), the Montagnola and the Crete Senesi as well as the Colline Metallifere and the Casentino .

The capital of Tuscany is Florence. The Tuscany region is divided into nine provinces and one metropolitan city :

Provinces and metropolitan city of Florence in Tuscany

The economy of Tuscany is mainly characterized by tourism and the cultivation of wine and olive oil production, as well as arts and crafts. The best-known Tuscan wines include Chianti , Sassicaia , Brunello di Montalcino and Vino Nobile di Montepulciano . Another important economic factor since the rule of the Etruscans has been steel production in the area around Piombino. Iron ore, pyrite, zinc ore, mercury, marble (from Carrara and Massa ) and salt are found in mineral resources . Mining was mainly carried out in the Gavorrano and Ribolla area . The Chianina cattle breed , the largest in the world, also originated in Tuscany.

Tuscany is one of the wealthiest parts of the country. In comparison with the GDP of the EU expressed in purchasing power standards , the region achieved an index of 105 (average EU-25: 100) (2015). With a value of 0.903, Tuscany ranks 5th among the 21 regions and autonomous provinces of Italy in the Human Development Index .

Blazon : In red a silver pegasus jumping up to the left . 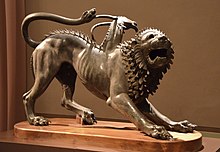 The Arezzo Chimera , one of the most famous examples of Etruscan art (5th century BC)

As the core area of ​​the Etruscans , Etruria was one of the most important countries in the Mediterranean region before it became part of the 4th to the 1st century BC. It was gradually subjugated by the Roman Empire and incorporated into the Roman Republic .

Since Emperor Augustus , the area under the name "Etruria" has formed the seventh of eleven regions into which Italy was divided for administrative purposes. Under Emperor Diocletian it was united with Umbria in the province of "Tuscia et Umbria" at the end of the 3rd century , an arrangement that lasted at least until the year 400.

The Roman historian Ammianus Marcellinus made a distinction at the end of the 4th century between “tuscia suburbicaria” (south of the Arno ) and “tuscia annonaria” (north of the Arno).

After the collapse of the Western Roman Empire , Tuscia came under the influence of the Heruli , the Ostrogoths , the Visigoths , the Byzantine Empire and the Longobard Empire . Under the Lombards , "Tuscia Langobardorum", consisting of the districts of Viterbo , Corneto and Bolsena , was distinguished from the "Tuscia Regni" located further north.

With the “Pippin donation” , the southern part (roughly today's province of Viterbo) came to the Patrimony of Petri in 754 ; the northern part became the Margraviate of Tuscany, which under the Staufers together with Lombardy and the Margraviate of Verona formed the Kingdom of Italy in the Holy Roman Empire of the German Nation .

Under Charlemagne , the name "Tuscia" or "Toscana" was narrowed to the "Tuscia Regni". The Frankish margrave Boniface II fought successfully against the Saracens in Africa around 828 . Margrave Adalbert I took the side of Karlmann against his brother Ludwig III. of France and subsequently suffered excommunication and imprisonment. Adalbert II the Rich (Margrave of Tuszien), who married the ambitious Bertha, daughter of the Lotharing King Lothar II , played a prominent role in the politics of his time.

A subsequent margrave, Hugo the Great , also became Duke of Spoleto in 989 . The male line of the margraves ended with Boniface II (or III), who was murdered in 1052. His widow Beatrix married Gottfried, Duke of Lorraine in 1055 , and ruled the country until her death in 1076. She was then followed by Matilda , her only child by her first husband. Matilda died in 1115 with no descendants and left all her extensive possessions to the church first, but then made the emperor her heir in 1111. This resulted in a long dispute between the popes, who claimed the inheritance, and the emperors, who on the one hand invoked the inheritance of 1111 and on the other hand denied the countess the right to dispose of imperial fiefs. The conflict over the Mathilde estates enabled the larger cities of Tuscany to gradually gain independence. The most important of these Tuscan republics were Florence , Pisa , Siena , Arezzo , Pistoia and Lucca .

Time of the city republics

The Florentine Republic conquered important Tuscan cities in the 15th century and became increasingly dominant within Tuscany and Italy. Siena defeated Florence in the great battle of Montaperti in 1260 without suffering permanent damage to Florence. Siena only lost its independence again in the 16th century and was annexed to the Duchy or Grand Duchy of Tuscany. Lucca remained independent from Tuscany until after Napoleon's rule. For a detailed account of this part of history, see also History of Florence , Republic of Siena , History of Pisas .

The Grand Duchy of Tuscany (Italian Granducato di Toscana ) was established in this form in the 16th century under Cosimo I de 'Medici . It was formally a fiefdom of the Roman-German emperor as part of imperial Italy and came into the possession of the Habsburgs in 1737 with the death of Gian Gastone de 'Medici . When Peter Leopold became Emperor Leopold II in 1790, he made the Grand Duchy a secondary school for the House of Austria-Lorraine . With interruptions during the Revolution and the Napoleonic era , the Grand Duchy remained part of the Habsburgs until it became part of the Kingdom of Italy in 1861.

Cathedral and Leaning Tower of Pisa

Tourism is one of the most important sources of income for the people of Tuscany. Tuscany has a large number of historically and art-historically significant cities, mostly of Etruscan origin. The main tourist destination is Florence with the Duomo, the Uffizi Gallery , the Ponte Vecchio and the many Renaissance palaces . But Pisa , the famous Leaning Tower , Siena , with the annual horse race called the Palio, and San Gimignano , a term coined by medieval architecture spot to World Heritage of UNESCO counts are popular stops on a cultural trip through Tuscany.

Beach tourists will find good conditions on the Etruscan Riviera and the Maremma coast along the mainland as well as on the island of Elba , which can be reached via the ferry port of Piombino . The 397 km long coast of Tuscany is varied: the northern section, the Versilia, offers long, wide and, above all, fine sandy beaches. The adjoining part, the Etruscan Riviera, has many secluded bays that can be reached on foot or by boat. Popular seaside resorts are Viareggio and Forte dei Marmi .

Another attraction are the many thermal springs in Tuscany, especially the health resorts of Montecatini Terme , Gambassi Terme , San Casciano dei Bagni , Bagno Vignoni , Rapolano Terme and Saturnia and the small town of Bagni San Filippo .

Tuscany gained a certain fame as the preferred travel destination of a group of left-liberal German intellectuals (" Toskanafraktion ").

A number of regional areas outside Italy are referred to as "Tuscany" because of their geological similarity to Tuscany and their comparable vegetation. Examples: the UNESCO biosphere region “ Bliesgau ” in Germany / Saarland is commonly referred to as the “Tuscany of the Saarland”. The eastern part of the Weimar region around Bad Sulza in Thuringia is referred to as the " Tuscany of the East ". This has led to a partnership between the towns of Apolda and San Miniato , starting with the latter, which has been extended as a partnership to the surrounding area. In Austria, the wine region in southwest Styria is called "Styrian Tuscany".

Provinces in the Tuscany region