Campania is one of the southern regions of the Mezzogiornos . It has an area of ​​13,595 km² and is bounded in the north-west by Lazio , in the north by Molise , in the north-east by Apulia , in the south-east by the Basilicata and in the west by the Tyrrhenian Sea . Campania consists of the provinces Avellino , Benevento , Caserta , Salerno and the metropolitan city of Naples . The capital of the region is Naples . The 5,785,861 inhabitants are mostly concentrated in the metropolitan area of ​​Naples. This makes Campania the most densely populated region in Italy and also the second most populous after Lombardy .

The topography is characterized by the lowlands in the north of the region and the mountainous landscape in the interior and on the Sorrento peninsula. The Apennines rise to a height of 2,050 meters ( Miletto ) and in some cases extend to the sea, creating steep coasts ( Amalfi Coast ). The 1,277 meter high volcano Vesuvius south of Naples, which is still active today, stands out.

The ancient Romans gave the fertile landscape its name: Campania felix (happy landscape). A name that Campania shares with the historic Champagne landscape in France . Both names are etymologically based on the concept of level (Latin campus ). In ancient times called Campania only the plane extending from the mountains Massicus (Neapolitan Apennines ) south to the mountainous peninsula of Sorrentum ( Sorrento extends and) the land of the Sabines and Picentiner was limited.

Originally inhabited by the Oscars , it came from the 8th century BC. BC to the founding of several colonies by the Greeks ( Neapolis , Cumae , Poseidonia = Paestum ). 424 BC The previous prevalence of the Etruscans died out when the Oscar-speaking Samnites conquered the region.

The central city at that time, however, was Capua . Located in the heart of the Campanian plain, the capital of the Campanian city union was already in the 4th century BC. The largest city in Italy after Rome . The people of the land around Capua were not Latins . When the landscape changed in the course of the Samnite Wars in 340 BC. When it was connected to Rome in the 3rd century BC, the inhabitants got the status of municipes ("half" citizens), the civitas sine suffragio , in contrast to the full citizens of the Latin areas. 312 BC BC, with the construction of the Via Appia from Rome to Capua, the importance of this connection was expressed. Probably the most famous street of antiquity was the model for all other Roman streets and consular streets .

With the sacking of southern Italy by Hannibal's Carthaginian army from 216 to 203 BC. During the Second Punic War , agriculture was plunged into an ongoing crisis. Not only was the loss of livestock and grain immense, the country also became depopulated, as an average of 135,000 Roman citizens and allies took arms instead of rebuilding the country over the next 35 years. This negative development finally led to the comprehensive Gracchian reforms of the tribune Tiberius Sempronius Gracchus (168-133 BC). Its reform was made possible by the ager publicus . Land that had been illegally taken, as well as land owned by towns like Capua (which revolted in 216 BC in the last war), was confiscated by the state. This state property was now legally distributed to previously expropriated farmers with inalienable property rights.

90 BC Campania was overrun by insurgents (in the alliance war ), but in 89 BC. Recaptured by Sulla . He besieged the city of Nola southeast of Capua and led a victorious march to Samnium . For two years, from 73 BC BC to 71 BC BC, a force of fugitive slaves led by the Thracian gladiator Spartacus plundered southern Italy. Finally they were defeated by the army of Marcus Licinius Crassus (115–53 BC): 6000 captured slaves were crucified. The crosses stretched from Capua to Rome.

At the end of the alliance war, the pacification of the south followed. Full citizenship was given to all churches that remained loyal and all who laid down their arms. This expansion of civil suffrage concluded the Romanization of Italy. Since the 1st century the area was a popular summer residence of wealthy Romans : Campania Felix .

With the overthrow of the last legitimate Emperor of Western Rome, Julius Nepos , 475, Odoacer and his barbaric auxiliaries pushed through his takeover of power in Italy and was elected by his mercenaries for Rex Italiae - although he continued to place himself under the supremacy of the Eastern Roman Emperor in Constantinople . Nevertheless, this was the end of Roman statehood in the western part of the empire. Only under Justinian I , the last emperor of Constantinople, whose mother tongue was Latin, a renewed, temporary incorporation of Italy into a Roman Empire succeeded , but in 568 the East Germanic Longobards invaded Italy. Until the beginning of the 11th century, southern Italy remained Byzantine or Lombard in the principalities of Benevento , Capua and Salerno in the coastal strip .

Between 882 and 915 Campania was invaded by the Saracens who established an Islamic emirate in central Italy on Garigliano ; the rural population fell sharply. By 1091, Norman warriors conquered the island of Sicily, which had also been ruled by the Saracens since 827. As a result, they united this new kingdom with their already existing possessions around Naples and brought all of southern Italy under their rule up to the border of the Papal States .

This Norman kingdom fell to the Hohenstaufen Henry VI in 1194 . , who had married Constance of Sicily in 1186 , the heiress of the last Norman king Wilhelm II. When in 1197 Heinrich VI. Surprisingly died at the age of 32, Konstanze took over the rule for her son. As Friedrich II , he was elected German king in 1196 at the age of two and was crowned emperor in 1220.

Since Friedrich, as Emperor of the Holy Roman Empire of the German Nation, also ruled over the territories of northern Italy, the Pope felt threatened by this grip. As a result of the increasingly worsening conflict, the French Prince Charles of Anjou was lifted to the southern Italian throne by Pope Clement IV . As the last Staufer was Konradin taken in 1268 captured and executed in Naples.

After a popular uprising, Sicily fell to Peter III. from Aragon . The old Norman-Staufer kingdom had since been divided into the Aragonese kingdom of Sicily and the kingdom of Naples ruled by the Anjou .

With the extinction of the Spanish Habsburgs in 1700, the Kingdom of Naples also got into the turmoil of the War of the Spanish Succession . After the initial rule of the Bourbons now ruling Spain , southern Italy was occupied by Austria in 1707/08. The peace treaties of 1713/14 left the Kingdom of Naples with Austria. The rule of the House of Habsburg came to an end through new European shifts in power in 1735, when Austria had to cede the kingdom to a younger line of the Spanish Bourbons. A Spanish infant who later became King Charles III. of Spain (r. 1735–1759), was the first king of Naples to live and rule there personally for over 230 years. The center of power remained Naples , which was magnificently expanded by the new Bourbon kings.

In 1799, the Bourbon rule in Naples was ended by revolutionary French troops who established a republic there together with southern Italian supporters of the revolution . The king, who fled to Sicily, was brought back to power by the early withdrawal of the French and a bloody anti-revolutionary uprising by the rural population. Numerous local revolutionaries were then executed. 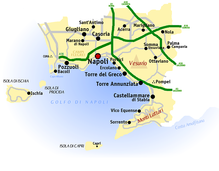 In 1806 Napoleon conquered Naples for the second time. The new ruler was Napoleon's brother Joseph Bonaparte , who moved to conquered Spain in 1808, and then Napoleon's brother-in-law Joachim Murat , who was able to keep himself in Naples after Napoleon's first fall in 1814 by changing sides in time, but in 1815 - now on the side of the returned, but at Waterloo decisively defeated Napoleon - lost his empire and a little later his life.

After Napoleon's defeat, Europe was reorganized at the Congress of Vienna . The kingdoms of Naples and Sicily were united in 1816 to form the Kingdom of the Two Sicilies (Regno delle Due Sicilie). It was precisely through this forced unification that there were repeated uprisings that were often violently suppressed.

At the beginning of the Italian unification process in the 19th century, the southern Italian kingdom of the two Sicilies remained neutral under the young King Francis II (1859–1861). This last Bourbon refused offers to join the new monarchy in Italy. When a troop under the leadership of the revolutionary Garibaldi first landed in Sicily in 1860 and then marched into Naples, this ended the rule of the Bourbons. The last king of the two Sicilies withdrew into Roman exile, and his previous kingdom joined the new Italy via referendums.

Description: A red sloping bar in the silver .

The provinces and the metropolitan city of Campania

The Campania region includes the following four provinces and one metropolitan city: 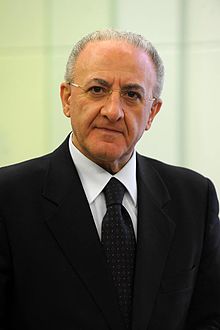 As a member of the federally organized Italy, Campania has its own government and parliament, which has been elected since 1970. The legislative period lasts five years.

At the head of the government (executive) is the regional president, who is directly elected for five years. In the last election for regional president on May 31, 2015, Vincenzo De Luca from the social democratic Partito Democratico won as a candidate for a left alliance with 41.2% against the incumbent Stefano Caldoro from Forza Italia with 38.4%, who was supported by several center-right Parties was supported.

The legislature consists of the Campania regional parliament, which has 51 seats, with one seat reserved for the directly elected regional president. Until 2011 the parliament still had 60 seats, but was reduced by law. The party system is highly fragmented with 14 parties in parliament. In the regional parliament, the Social Democrats are the largest group with only 19.5% or 16 seats. However, Regional President De Luca is supported by other parties. Forza Italia and Movimento 5 Stelle (M5S) each have seven seats .

The food sector, viticulture and tourism (especially in Naples, Ischia , the Amalfi Coast and Capri ) are economically important . The area around Vesuvius is very favorable for agriculture because of the fertile volcanic soil .

Compared with the GDP of the EU expressed in purchasing power standards reached the region in 2015 an index of 61 (EU-28 = 100). Unemployment was 20.9% in 2017. Campania is one of the regions with the highest unemployment in Europe. 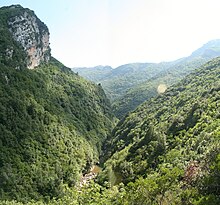 With the National Park Cilento and Vallo di Diano , Campania has a natural park with some important ancient sites ( Velia , Paestum and Charterhouse of Padula ). Therefore, the national park was declared a UNESCO World Heritage Site in 1998 . Other UNESCO World Heritage Sites in Campania are: the historic center of Naples , the Amalfi Coast , the archaeological sites of Pompeii , Herculaneum and Torre Annunziata and the Palace of Caserta north of Naples.

Parts of Campania, like other areas on the Italian peninsula, are geologically troubled. In addition to recurring earthquakes , there is strong volcanism there . The Vesuvius near Naples is an active volcano. The Phlegraean Fields 20 km west of Vesuvius are also an area with high volcanic activity.

Provinces in the Campania region