The Aosta Valley ( Italian Valle d'Aosta, French Vallée d'Aoste; Franco-Provencal Val d'Oûta; Walser German Augschtalann or Ougstalland; German outdated Augsttal) is an autonomous region with a special statute in Italy . The region, officially Regione Autonoma Valle d'Aosta - Région Autonome Vallée d'Aoste , has an area of ​​3262 km² and 125,501 inhabitants (as of December 31, 2019). It is therefore the smallest region in Italy, both in terms of area and population. The capital is Aosta ( French Aoste).

The Aosta Valley borders on Switzerland ( canton Valais ) to the north, France (Départemente Haute-Savoie and Savoie ) to the west, and the Piedmont region to the south and east ( metropolitan city of Turin , Biella and Vercelli provinces ).

On the western border of the valley lies Mont Blanc , the highest peak in the Alps, on the northern border of Monte Rosa (Mont Rose). The area includes the northern part of the Gran Paradiso National Park , a regional park ( Parco Naturale del Mont-Avic in Italian , Parc naturel du Mont-Avic in French ) and several smaller nature reserves and ski areas . 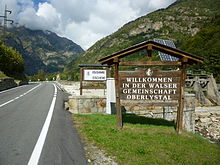 Map of the Aosta Valley

The Aosta Valley is not divided into provinces . All provincial competences have been transferred to the region. However, the 74 municipalities - with the exception of Aosta - are organized in eight unions Aosta Valley municipalities ( French Unités des Communes Valdôtaines) , which have replaced the former mountain communities ( Italian Comunità montane , French Communautés de montagne) .

1 Without the capital Aosta, which is not assigned to any Union
2Allocation of Sarre takes place afterwards

The parish names were Italianized during Fascism , but restored to their French version after World War II . Unlike in South Tyrol , the Italian translations have been abolished. Only the capital has an Italian place name in addition to a French one. 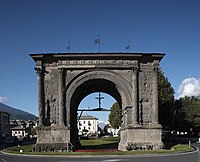 Arch of Augustus in Aosta

Originally inhabited by the Celtic Salassians , the region was partially conquered from the 2nd century BC and finally conquered by the Romans in 25 BC , who wiped out the Salasians through deportation and enslavement.

The Romans founded the Augusta Praetoria colony, today's Aosta, at the foot of the pass paths over the Little and the Great St. Bernhard .

The Burgundians , Ostrogoths , Lombards and Franks gradually took possession of the area. From the 11th century until 1946, the Aosta Valley belonged to the domain of the House of Savoy . It fell under French rule only for a short time (1691; 1704–1706, during the War of the Spanish Succession ; 1796–1814 annexed by Napoleon ). As part of the Savoy region, however, it was French and Franco-Provencal-speaking .

In 1861 the Aosta Valley became part of the Kingdom of Italy and the Province of Turin . Italy ceded the rest of Savoy to France .

Since the second-born son of the first Italian king, Victor Emmanuel II , Amedeo , 1870–1873 King of Spain , the title of Duca di Aosta (Duke of Aosta) was awarded, this line of the royal family (until 1946) continued the title.

Italianization was massively promoted during fascism . French was banned and massive Italian immigration was encouraged. In 1927 the Aosta Valley was separated from Turin and declared a province.

During the Second World War, the Aosta Valley was one of the most important centers of Italian resistance ( Resistancea ) and was awarded the Golden Medal of Bravery for this.

After the Second World War, the small region was given a special statute to counteract the annexionist aspirations of France and to meet the Valdostans' desire for autonomy. The historian Federico Chabod became the first president .

The Aosta Valley is officially a multilingual region.

The official languages ​​are Italian and French , which are officially the same. The bilingual version of Valle d'Aosta / Vallée d'Aoste is even anchored in the Italian constitution. All public offices are based on bilingualism. Italian and French have the same status at school. So have graduates from the Aosta Valley both Italian- and pass a French exam.

However, a survey by the Émile Chanoux Foundation showed that Italian is the mother tongue of the vast majority of Valdostans and only a part of the population regards the traditional vernacular, a Franco-Provencal dialect (Patois), as their first language.

After all, almost 80% of the inhabitants of the Aosta Valley have knowledge of French because of their schooling, and almost 70% of the citizens speak Franco Provençal. 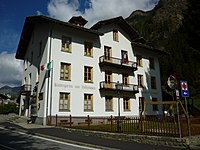 In the localities of Gressoney- la-Trinité, Gressoney-Saint-Jean and Issime , a German dialect is spoken by the older population . The regional statute expressly provides for the protection of the cultural and linguistic minority and guarantees native-language instruction. Melody and text of the Aosta Valley anthem

Due to the special statute of 1948, the Aosta Valley is an autonomous region. The regional council exercises considerable legislative powers. It consists of 35 regional councils. There is also a regional committee chaired by the president of the region. 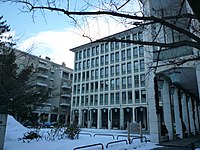 Seat of the regional government in Aosta

In terms of finance, the Aosta Valley is entitled to 90% of the taxes collected. This means that the region has around € 12,000 available per year and inhabitant.

The Aosta Valley is represented in the Roman Parliament by a senator and a deputy who are elected according to the majority vote. While all other regions send three representatives to the assembly for the election of the president, the Aosta Valley is only represented by one deputy due to its small size.

The political stage is dominated by the autonomist Union Valdôtaine movement . In the 2013 parliamentary elections, she was able to get her candidate Albert Lanièce to head the Vallée d'Aoste list for the Italian Senate. In the Chamber of Deputies, the region is represented by the Stella Alpina candidate, Rudi Marguerettaz . The Union Valdôtaine, which also provides the regional president, governs the region together with the Stella Alpina.

By regional law 6/2006 of March 16, 2006, the song Montagnes valdôtaines was chosen as the anthem of the Aosta Valley. The melody comes from Alfred Roland and was originally called "Tyrolienne des Pyrénées".

Agriculture plays an important role in the Aosta Valley. The Fontina cheese, registered as a protected trademark, comes from the mountain valley . In addition, the denomination Valle d'Aosta is a well-known Italian wine-growing region .

The most important branch of the economy is tourism. The winter sports resorts of Courmayeur and Breuil-Cervinia , which are linked by a ski area with Zermatt in Switzerland , are well known.

Traditionally, the Aosta Valley is one of the wealthiest regions in Italy. The municipality of Ayas is the richest in the entire state, the average income per taxpayer here is 66,408 euros. 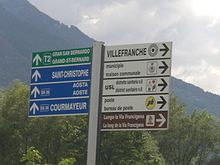 The Italian A5 motorway coming from Turin runs through the entire Aosta Valley and is connected to the French motorway network ( A40 ) via the Mont Blanc tunnel .

There is a connection to the French town of Bourg-Saint-Maurice via the Little St. Bernard Pass . The Grosser St. Bernhard Alpine Pass with the Great St. Bernhard Tunnel , opened in 1964, connects Martigny in Switzerland with the city of Aosta.

In addition, the Aosta Valley is opened up by a railway line from Chivasso via Aosta to Pré-Saint-Didier .

The Aosta airport is the regional airport of the valley.

View from Gran Paradiso of the ascent route

The Aosta Valley is represented by the towns of Bard and Étroubles in the list of the association I borghi più belli d'Italia (the most beautiful towns in Italy).

Monuments from the Roman era have been preserved in Aosta and other municipalities. Several large castles date from the Middle Ages, and the modern fortress of Bard stands on a mighty rock massif on the lower reaches of the Dora Baltea .

The Gran Paradiso National Park was established in 1922 as the first national park in Italy.