This article covers the municipality in Italy. For the band from the USA, see The Donnas .

Donnas is an Italian commune in the Autonomous Region of Aosta Valley with 2460 inhabitants (as of December 31, 2019).

The community lies on the left bank of the Dora Baltea and consists of the districts of Clapey, Montey, Vert and Pramotton.

During the time of fascism , the place had the Italianized name Dònas .

The place belongs to the Aosta Valley wine-growing region. The DOC red wine is mainly made from Nebbiolo grapes . 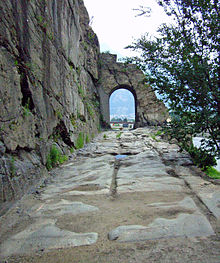 At the northern exit of the village, the national road leads past a listed fragment of a Roman trade route . It is about 220 m long and was carved out of the rock at the time of its formation. Old wagon tracks are clearly visible in the rocky ground of this road . Furthermore, an old rock arch spans this road and to the side there is a column with Roman numerals inscription (XXXVI, the distance between Donnas and Aosta), which is connected to the rock wall. This site is particularly worth seeing because large quantities of the hard rock were cut straight and straight with simple tools and such localities are generally only rarely preserved.

The ancient traffic moved from the south over this preserved part of the road to Augusta Praetoria Salassorum ( Aosta ) over the Alpine passes of the Great and Little St. Bernard and in the opposite direction. This road also includes the well-preserved Roman bridge in Pont-Saint-Martin , a town a few kilometers to the south, and two bridge fragments to the north of Donnas, near Saint-Vincent and Châtillon .