This article covers the location in the UK. For further meanings, see Dover (disambiguation) . 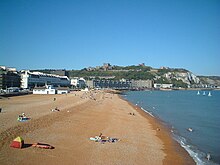 Dover Beach, with the chalk cliffs and Dover Castle in the background 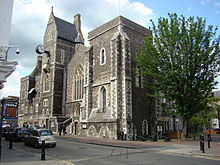 Dover [Brit. ˈDəʊvə ] is an English city ​​with the main English port on the Strait of Dover on the English Channel . Dover is located in the county of Kent and is the administrative seat of the district of the same name .

Dover is located in the extreme southeast of England and is the closest English city to mainland continental France and France . The shortest distance in the Strait of Dover of about 34 kilometers is measured between South Foreland, northeast of Dover, and Cap Gris-Nez near the French port city of Calais . The chalk cliffs of Dover are famous . The Romans erroneously attributed the (probably pre-Celtic ) name Albion for Britain to the white rocks because of the phonetic similarity to their word albus for white .

Being the English city closest to mainland Europe, Dover has had a great strategic importance for centuries.

In 1974 the Langdon Bay Fund was discovered off the coast of Dover. It contained French-made bronze axes and is likely the remainder of the cargo from a sunk ship. At the same time, this find also makes it clear that there were trade routes across the Channel between England and France as early as the Bronze Age, or even earlier. In 1992 the so-called Dover Boat from the Bronze Age was discovered in six meters of water . It is one of the oldest finds of a seaworthy boat. The year 1550 BC was determined using the radiocarbon investigation method . Chr. Determined as the year of construction of the boat. Both finds are on display in the Dover Museum in Market Square.

In Roman times, Dover was an important fortified port called Portus Dubris . In Dover began the Roman road "Watling Street" (Anglo-Saxon: Wæcelinga Stræt), which led across Britain. The British fleet of the Romans ( Classis Britannica ) was also stationed in Dover and controlled the strait from there.

In 50 AD, the Romans built two lighthouses on both sides of the then still existing river mouth. Nowadays, remains of it can be found on the one hand on Western Heights and on the other in the foundations of Dover Castle , where they were built. The Painted House is a former Roman administration building and one of the best preserved Roman buildings in Great Britain. Right next to it is the fortified port of the Roman fleet. A Saxon coastal fort was built over both of them in later centuries .

After the Battle of Hastings in 1066, William the Conqueror marched with his troops to London to Westminster Abbey to be crowned there. He did not take the direct route, however, but marched via Romney , Dover, Canterbury , Surrey and Berkshire . Dover has been a leading member of the " Cinque Ports " alliance since 1050 , in which the country's most important seaports had come together. This aroused the interest of the conqueror. The medieval chronicler William of Poitiers reports on William's march on Dover:

“Then he marched to Dover, which was said to be invincible and held by a large number of soldiers. However, they were very afraid when he approached and they did not trust their bastions or the number of their troops ... While the inhabitants prepared for an unconditional surrender, (the Normans) set the castle on fire out of greed for prey and a large part stood immediately on fire ... (William paid for the repairs and) took possession of the castle. The Duke then stayed in town for eight days to have new fortifications built. "

Archaeological research has shown that a new castle was built near the Saxon church of St. Mary de Castro , from which today's Dover Castle developed. On the remnants of the prehistoric ramparts, construction work on the castle began in 1168 by order of Heinrich II . 1180 was the center of the complex of the Norman castle keep , which now houses a museum. In the 13th and 14th centuries, massive ring structures were added as additional security measures to strengthen the area.

The Normans built two churches in Dover. The Church of St. Mary the Virgin (on Roman foundations) is still preserved today, while the Church of St. James the Apostle was destroyed during World War II. They also restored the monastery church of St. Martin le Grand and founded a new monastery dedicated to St. Martin . Remnants of this monastery were later remodeled when Dover College was built .

The town hall, built in 1203 by Hubert de Burgh , which was once a pilgrims' hostel, still stands in the city center . In 1216 Dover was attacked by the French, but could be successfully defended by Hubert de Burgh. In 1295 there was another attack by 10,000 French soldiers, who this time burned the city down. Due to its excellent trade-promoting location, the city flourished again quickly.

In the time of Henry VIII and Elizabeth I , who constantly had to live in fear of an invasion by enemy troops, the defenses were further strengthened. The castle was fortified and a moat was added.

During the English Civil War , the city of Dover took the king's side and was therefore finally conquered by the parliamentary army without resistance. The later King Charles II landed on his return to England from exile in Dover on May 26, 1670. Here he also signed the secret peace treaty that ended hostilities between England and the French King Louis XIV .

During this time Dover became a heavily fortified garrison town, as an invasion by Napoleon's troops had to be expected at any time . At times they had already gathered in the city of Boulogne and could be seen from Dover on a clear day. First, gun batteries were dug in mounds of earth along the coastline and the "Western Heights". They were supposed to support the defense of the castle, which was no longer up to date with the latest defense technology. In 1804 the "Western Heights" were then again massively expanded with stone fortifications, so that two new forts with trenches were built there. In addition, the " Grand Shaft " was built, a staircase that led from the forts on the hill down to the city, so that troops could quickly get from the hill to the coastline.

Between 1801 and 1901 the population increased sixfold. The port was expanded with additional jetties; the city became more and more a seaside resort. An amusement pier and an ice rink were built. Bathing cars for the beach were purchased and imposing hotels and apartments were built on the lake side. A railway connection was created and ferry traffic with the continent was expanded. Admiralty Pier Turret is located on the western pier (coordinates 51 ° 6 ′ 36 ″ N, 1 ° 19 ′ 12 ″). An armored turret from 1880 with two rifled muzzle loading cannons in 16 inch (40.6 cm) caliber, which have a range of approx. 7 km. Each gun weighs about 80 tons; these are the two largest guns in Britain. The armoring of the turret consists of layers of wrought iron and wood, composite armor in 1880. Only a few test shots were fired from the gun emplacement. In 1906 the position was deactivated, directional drives and ammunition lifts later expanded. The guns themselves can still be fired and are on their mounts .

Early 20th century Dover was the center of English Channel defense in the First World War . The town, along with Folkestone, was the main port of embarkation for troops shipped to France. During the war, the city was bombed by zeppelins , airplanes and passing warships. The first bomb to be dropped on England exploded near Dover Castle on Christmas Eve 1914. During this time, the inhabitants often had to seek shelter in bunkers or caves. The city was also known colloquially as Fort Dover and was largely under martial law because of the constant threat. On February 27, 1916, two miles from the city, the British passenger steamer Maloja was sunk by a German submarine en route from London to Bombay. 155 people were killed; the dead were lined up in Market Hall for identification.

During the Second World War , the city was shelled 3,059 times by long-range cannons from the French bank. As a result, 216 residents were killed and 10,056 houses were damaged. A large number of caves and tunnels in the chalk cliffs were used as protective bunkers. During the evacuation of Dunkirk ( Operation Dynamo ), the military headquarters of the evacuation were located in these shelters. During the war the city was also called "Hellfire Corner" because of its location.

Dover is a member of the Cinque Ports ( French: Five Ports ), a union of cities in the counties of Kent and Sussex . It was originally founded as a military and economic alliance of five port cities on the English Channel and was an influential political power in the late Middle Ages. Today the alliance mainly serves the economic cooperation of the port cities of south-east England.

There are also town partnerships with the town of Calais on the French side of the English Channel and with the Croatian port city of Split .

Because of its proximity to mainland Europe, Dover ferry port is one of the most popular ports on the English coast. Several million people cross over to France from the UK every year. There are regular ferry services to Calais and Dunkirk. The opening of the Eurotunnel in 1994 and the end of the legendary hovercraft connection to Calais in 2000 have diminished the port's central role.

The white rocks of Dover also serve as a trademark for whitecliffscountry , an Internet portal that is supported by the Dover District and provides current tourist offers from the region.

The white rocks of Dover

The A2 (M) connects Dover's port for car ferries ( Ship Ferry Vehicular Terminal at the Eastern Docks) with Canterbury and London. The M20 also leads to London via Folkestone . The A258 leads to neighboring Deal and the A256 to Sandwich .

The ferry companies P&O and DFDS serve the route to and from Calais, LD Lines the French Boulogne-sur-Mer and DFDS Dunkirk . In front of the Western Docks is the terminal for cruise ships ( Cruise Liner Terminal ).

Via Dover Priory station, which is centrally located near the arterial road to Folkestone, the Southeastern Railway (including a stop at Canterbury East Station ) can take you directly to London Victoria Station . On the return journey, please note that some trains are split at Faversham . For the times outside of the traffic peaks ( off peak ) a reduced fare applies. Dover is also connected to the high-speed rail network to / from Ashford , Ebbsfleet International and St. Pancras (London) stations .

View of the ferry port