The title of this article is ambiguous. Further meanings are listed under Piacenza (disambiguation) . 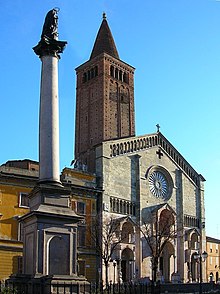 Piacenza ( listen ? / I , in ancient times Placentia ; Πλακεντία Plakentia ) is a city with 104,315 inhabitants (as of December 31, 2019) in northern Italy . It is the capital of the province of Piacenza in the Emilia-Romagna region and is located near the confluence of the Po and Trebbia in the Lombardy plain. The city is a trading center and industrial center, where natural gas and oil refineries are located. Cement, food, plastic, leather goods and agricultural implements are also produced. There is an air force base nearby.

It has churches worth seeing, including the cathedral in the Lombard-Romanesque style (1122–1233).

Piacenza was founded in 218 BC. To the Roman colony . While its walls were not yet completed, it had to repel an attack by the Gauls , and in the same year it sheltered the remains of a Roman army under Scipio , defeated in the great Battle of the Trebia . 205 BC BC the city withstood a long siege by Mago . Five years later, the Cisalpine Gauls burned the city down, and in 190 BC. BC it had to be resettled with three thousand families. 187 BC The city was connected to Ariminum ( Rimini ) and the south by the construction of the Via Aemilia . It later became a very important hub; the continuation of the Via Aemilia north to Mediolanum ( Milan ) with a junction to Ticinum ( Pavia ) crossed the Po there , and the Via Postumia from Cremona to Dertona and Genoa ran through it. Even later Augustus built the road from Dertona to Vade and on to Gallia Narbonensis ( Via Julia Augusta ). The rectangular pattern of streets in the city center, through which Via Aemilia ran, is undoubtedly a holdover from Roman times.

Placentia is mentioned in connection with the conquest by Cinna and a defeat of Carbos' troops nearby (82 BC), a mutiny by Julius Caesar's garrison (50 BC), another under Augustus (40 BC). Chr.), The defense of the city by Spurinna ( Othos General) against Caecina ( Vitellius ' General) (69 AD).

When, in the 3rd century, the Alemanni were the first barbaric people to invade northern Italy via the Alps, Placentia was one of the first large Roman cities to be besieged by the invaders. The “soldier emperor” Aurelian then marched north with an army. Thereupon the battle of Placentia took place in front of the city walls in 271 , in which the Alemanni succeeded in surprising the Romans in their camp and inflicting a severe defeat on them. The city was then sacked by the Alemanni and a large part of the population enslaved. The fall of the city, which was important for the entire northern trade of the empire, destabilized the entire empire and caused panic in the capital.

In 546, Totila subjugated Piacenza due to famine. Between 997 and 1035 the city was ruled by its bishops, who were led by Otto III. had received the title of count.

In the 12th and 13th centuries Piacenza was an important member of the Lombard League . As a rule the city remained Guelfish , but on several occasions it called upon powerful Ghibellines to help them against their native tyrants; an example of this was Galeazzo I. Visconti . In 1447 Piacenza was conquered and sacked by Francesco I. Sforza . After it was occupied by papal troops in 1512, it was united with Parma in 1545 to form a hereditary duchy under Pier Luigi II Farnese , a son of Paul III. Until 1731, it was ruled by the Farnese family, who shaped the city's architecture. In 1746 a battle between the French-Spanish and Austrian armies was fought in front of the city walls. In 1796 it was occupied by the French. In 1848 Piacenza was one of the first Lombard cities to join Piedmont ; but it was reoccupied by the Austrians until 1859.

Description : Split into red and white. In front a white middle or heart quadrilateral and behind a red-tongued blue bitch . A five-towered golden wall crown above the coat of arms .

Various industrial companies have settled in Piacenza, including the truck manufacturer Astra .

At San Damiano there is a military airfield of the Italian Air Force . Since its military future is not certain, there have been plans for civil use for several years. From 1995 to 2001, German Tornado fighter planes were stationed in Piacenza to support multinational missions in the former Yugoslavia.

The air force base is now closed.

Municipalities in the province of Piacenza in the Emilia-Romagna region