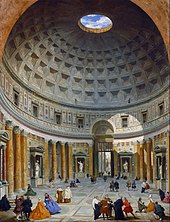 The interior of the Pantheon in Rome

Pannini first learned the profession of stage designer in Piacenza. He may have been a student of Francesco Galli Bibiena . In 1711 he moved to Rome and took drawing lessons from Benedetto Luti . In Rome he also met Canaletto , who had a strong influence on him.

Pannini was then in Rome as a decorator of palaces such as the Villa Patrizi (1718-1725), the Seminario Romano (1722) for Cardinal Spinola and the Palazzo de Carolis (1720) known as well as for his cityscapes (vedute) of Rome, where he in particular Remains of Roman antiquity such as the Pantheon portrayed as well as pictures from picture galleries with views of Rome. He also painted portraits and Roman festivals and places such as the Piazza Navona (Louvre, Lower Saxony State Gallery Hanover).

In 1718 he became a member of the Congregazione dei Virtuosi al Pantheon . He also taught at the Accademia di San Luca (of which he was a member) and the Académie de France in Rome, where he influenced Jean-Honoré Fragonard , among others . In July 1732 he had become a member of the French Royal Academy of Arts . Hubert Robert and his own son Francesco Pannini also worked in his studio . His work also influenced other vedute painters such as his student Antonio Joli and the French Hubert Robert.

He also designed celebrations, for example in 1729 to celebrate the birth of the heir to the French throne ("Dauphin") for Cardinal Melchior de Polignac and in 1745 for the marriage of the Dauphin. He was involved in the painting of various Roman palaces, for example in 1722 for the Quirinal Palace for Innocent XIII. , 1721/22 the Seminario Romano for Cardinal Spinola and 1720 the Palazzo de Carolis.

His son Giuseppe was an architect and his son Francesco a painter who followed in his footsteps.