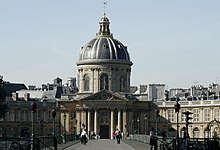 The building on the Quai de Conti

The Académie des Beaux-Arts is a French learned society in Paris ( 6th arrondissement ), which is subordinate to the Institut de France , under whose patronage it was founded in 1803 as an independent academy after having been the section “Literature and Fine Arts “ Belonged to the Institut national des sciences et des arts .

The Academy left its original meeting place, the Louvre, in 1805 to move to the Collège des Quatre Nations on the Quai de Conti , where it is still located today.

For 2020, the sculptor Jean Anguera is president and the architect Alain Charles Perrot is vice-president of the academy. The composer Laurent Petitgirard has held the post of secretary since February 2017.

The Académie des Beaux-Arts traces its history back to several previous royal organizations :

The Académie royale de peinture et de sculpture (Royal Academy for Painting and Sculpture) was founded in 1648 on the initiative of the first court painter Charles Le Brun . Two years later, Le Brun, who was to become rector of the academy in 1668, supported the founding of a second organization, the Académie de France à Rome , with the support of Minister Jean-Baptiste Colbert .

The Académie royale d'architecture was founded - also on the initiative of Colbert - in 1671. Its first director was the architect and theorist François Blondel .

On August 8, 1793, the National Convention abolished all academies and learned societies.

As a successor to the royal academies, the republican Institut national des sciences et des arts (State Institute of Sciences and Arts) was established on October 25, 1795 , from which today's Institut de France emerged . The third of the three classes of this institute comprised the areas of Littérature et Beaux-Arts (literature and fine arts). However, among the eight sections in this class - grammar, ancient languages, poetry, antiques and monuments, painting, sculpture, architecture, and music - the fine arts were underrepresented.

On January 23, 1803, the institute opened a fourth, independent literature class for the fine arts - initially with 28 members. In 1805 he moved from the Louvre to the Collège des Quatre Nations (Palais Mazarin) on the Quai de Conti.

The Académie des Beaux-Arts has owned the Roman Villa Medici since 1803 , the seat of the Académie de France à Rome, and since 1916 the Casa de Velázquez in Madrid. This was inaugurated in 1928 and completely renovated in 1959.