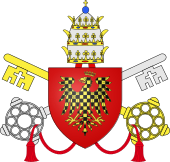 Coat of arms of Innocent XIII.

The Roman nobleman Michelangelo Conti studied in Ancona and Rome at the Gregoriana . Pope Alexander VIII appointed him papal treasurer of honor. Under Pope Innocent XII. he became a member of the Roman prelature.

In 1709 he became Resident Bishop of Osimo , and from 1712 to 1719 he was also Bishop of Viterbo . On May 8, 1721, he was unanimously elected the new Pope in a previously very eventful conclave after the favorite Fabrizio Paolucci , the cardinal state secretary of his predecessor Clement XI, had been excluded from the election by an imperial veto (see Rampolla ). On June 16, 1721 he made his brother Bernardo Maria Conti cardinal.

On June 9, 1722 he enfeoffed Emperor Charles VI. with the two kingdoms of Naples and Sicily , in 1723 he raised the diocese of Vienna to an archbishopric. He was always hostile to the Jesuits and demanded that they fully recognize the papal decrees , especially in the rites controversy . The Jansenists , however, hoped in vain for papal support for them.