Nuncio is a redirect to this article. For the pseudonym of the Czechoslovak-German poet, see Louis Fürnberg . 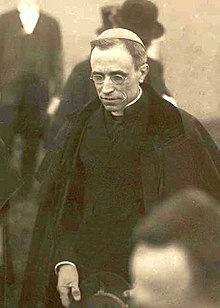 French Foreign Minister Robert Schuman at a speech given by the Apostolic Nuncio in France, Angelo Roncalli , who later became Pope John XXIII, in Luxeuil-les-Bains in July 1950.

An apostolic nuncio ( Latin "papal messenger") is the ambassador of the Holy See (i.e. the totality of the supreme governing bodies of the Catholic Church , in the center of which the Pope is the subject of international law ) who is accredited to the government of another state .

As a diplomat, the nuncio also represents the interests of the Vatican City State and represents the Pope as head of the church in relation to the local churches in the respective country.

The seat of a nuncio is called an apostolic nunciature .

Diplomatic relations of the Holy See

The Roman popes have been sending ambassadors since the 4th century, initially as papal legacies . These were elevated to cardinals in the 11th and 12th centuries. The first nunciatures arose from the early 16th century, initially in Spain, France, Venice and the Holy Roman Empire.

Since the end of the Thirty Years' War, an apostolic nuncio has usually held the rank of titular archbishop with the title of Most Excellency . Pope John XXIII decreed that all nuncios should be ordained bishops if they were not already.

The legal basis in the Codex Iuris Canonici and the historical genesis of the office suggest that the Apostolic Nuncio primarily has a spiritual function:

"The apostolic nuncio is both priest and diplomat. Just as the Holy Father unites both a spiritual and a secular position in one office, whereby the primacy lies in the former ( suprema lex salus animarum ), so the apostolic nuncio primarily does not fulfill one intergovernmental, but an internal church function. "

The Apostolic Nuncio has been ambassador since the Congress of Vienna in 1815 . He also represents the Pope at the respective bishops' conferences . Like any diplomat, a nuncio must be accredited by the receiving state .

If the Pope's envoy is not accredited by the head of state or the government of the host state, but only maintains contact with the church institutions and people, he is called an apostolic delegate . Papal diplomats, such as Janusz Urbańczyk , who are posted to international organizations are called permanent observers of the Holy See and correspond to the secular permanent representatives .

In many countries (for example in Germany ) the nuncio is doyen (French for dean) of the diplomatic corps on the basis of a concordat and, as primus inter pares, has some honorary rights. This goes back to the long-running dispute between states over who should be given first place. This was resolved by the Vienna Convention on Diplomatic Relations , in which the representative of the Pope was granted this privilege.

The doyen speaks on official occasions as a representative of the entire diplomatic corps and particularly represents the interests of the smaller states.

The designation pro-nuncio was originally reserved for those nuncios who already had the rank of cardinal. The rank of cardinal, which according to protocol was equivalent to a prince of the blood, was clearly higher than that of a diplomatic head of mission, both inside and outside the papal curia , so it was unusual to send cardinals to a post of nunciature. If, for example, a nuncio received the purple shortly before the end of his mission, his activity as a nuncio could still be necessary for a transitional period, for example to conclude negotiations. This (recently created) cardinal acted “in place” (Latin: “pro”) of a nuncio. Pro-nuncios of this kind were very rare exceptions in special situations.

In the wake of the Curia reforms, ecumenical endeavors and, in particular, the papal Eastern European policy after the Second Vatican Council, this title was redefined. Since diplomatic relations were established as a result of the cautious opening towards the Eastern Bloc states, but these, as well as traditionally non-Catholic, in particular Islamic dominated states, rejected a doyen of nuncio, in 1965 the title of pro-nuncio was used to denote an apostolic nuncio without an automatic position as Doyen created from scratch. This designation remained in force until 1991. After that, all pro-nuncios were converted into nuncios, so that the title "Apostolic Nuncio" says nothing about the position as doyen.

Originally, the Pope's envoys who were temporarily entrusted with representing the Holy See were given this title. In the 19th century it was occasionally used for particularly small missions, such as in South America. In the diplomatic protocol, after the ambassadors, the Internuntius was at the head of the envoys, which in those states which only accredited envoys as heads of mission meant that the Internuncio was effectively assigned the position of a doyen of the diplomatic corps. Since the appointment of ambassadors became customary in " small states " from the middle of the 20th century, the previously extremely rare appointment of internals fell out of use.

Papal special envoys repeatedly came to the court of the Cologne electors. The Cologne Nunciature did not become a permanent institution until 1584. For decades, the reform idea of the Council of Trent (1545–1563) was in the foreground of their work. The few outstanding events of the Cologne nunciature include occasional trips by the nuncios to the Reichstag (1594 and 1622), to the imperial elections in Frankfurt (1612 and 1658) and the participation in the peace congresses in Münster (1644-1648), Aachen (1668), Cologne (1673–1674) and Utrecht (1713). The catchment area of ​​the Cologne Nunciature included the dioceses of Würzburg in the south, Osnabrück, Paderborn and Hildesheim in the northeast and Liège in the west. Although the Nordic mission areas in northern and central Germany, at times also Sweden and Denmark, were legally part of the district, the main focus was on the three spiritual orbital dioceses of Mainz, Trier and Cologne. The nunciature ended with the occupation of the city of Cologne by the French in 1795.

Directory of the permanent nuncios in Cologne 1584–1794

Directory of the nuncios in Saxony

The Apostolic Nunciature in Munich was founded in 1785, at the height of the so-called nunciature dispute , and dissolved after a few years of existence in 1800. It was rebuilt in 1818 and finally abolished in 1934. After the Second World War, the Bavarian state government made unsuccessful efforts to re-establish diplomatic relations with the Vatican.

Directory of the nuncios in Prussia

Apostolic nuncios in the German Empire

Directory of the nuncios in the German Empire

According to an order from Adolf Hitler , the German Reich maintained diplomatic relations with the Vatican only for the area of ​​the "Old Reich". Since the Vatican still had a nuncio in Poland - accredited before the occupation - (1936–1947 Filippo Cortesi , titular archbishop of Siraces , 1943–1953 managing director William Godfrey , titular archbishop of Cio ) and recognition of the occupations or connections to the Reich until the end opposed acts of war, Hitler argued that, for example, the Polish territories he occupied (which, according to the Vatican, still belonged to Poland) and the eastern border areas (the Reichsgaue Danzig-West Prussia , Wartheland , Sudetenland ) were not subject to the regulations of the Reich Concordat would fall, so the Nuncio Cesare Orsenigo (1930–1945) , who was accredited in Germany, was not responsible for these areas. In these areas, however, the National Socialists did not allow any nuncios or similar institutions; Responsible for this were the head of the NSDAP party chancellery ( Martin Bormann ) from the German side , the local cardinals, bishops, etc. from the church side. Unofficially, there were non-official contacts between Orsenigo and the German Foreign Ministry in humanitarian matters.

Apostolic Nuncio in the Federal Republic of Germany

Directory of nuncios in the Federal Republic of Germany

Aloysius Muench, first nuncio in the Federal Republic of Germany, adopted in 1959

Apostolic nuncios at the imperial court in Vienna

Directory of the nuncios at the imperial court in Vienna

Apostolic Nuncio in the Republic of Austria

Directory of the nuncios in the Republic of Austria

Directory of nuncios in Switzerland

Directory of the nuncios in Liechtenstein

Founded in 1910 as an international nunciature, it was promoted to the rank of nunciature on May 9, 1969. To this day it is always co-administered by the Apostolic Nuncio of Belgium.

Directory of nuncios in Luxembourg

Apostolic nuncios in the Netherlands

Established as an internunciature, the first internuncio was appointed on November 29, 1911. Raised a nunciature since July 22, 1967, it was only ever occupied by one pro-nuncio until 1992.

Directory of nuncios in the Netherlands

Directory of nuncios in Poland

Directory of nuncios in the Russian Federation

Directory of nuncios at the EC / EU

The Vatican is a generally recognized state, but not a member of the United Nations . The Holy See representing him , a non-governmental, independent subject of international law distinguishable from the State of Vatican City, has been represented by a "permanent observer" with the rank of archbishop at the UN headquarters in New York and Geneva as well as at the UN sub-organizations since 1964 , since 1948 with the Food and Agriculture Organization FAO , since 1951 with UNESCO .

The reason for this is the preservation of neutrality and the mediating role of the Vatican, especially in armed conflicts.

Directory of the Nuncio at the United Nations