The title of this article is ambiguous. Further meanings are listed under Capua (disambiguation) .

Capua is a southern Italian city with 18,141 inhabitants (as of December 31, 2019) in the province of Caserta in the Campania region on the Volturno river .

After the destruction of the ancient and early medieval Capua near today's Santa Maria Capua Vetere by the Saracens (840), the Lombards founded the city again in 856 as Capua nova ("New Capua"), a little further away from the previous location, near the ancient casilinum . In the 11th century, during the Norman conquest of southern Italy , Capua came into Norman possession and became part of the Kingdom of Sicily in the 12th century . The Assises of Capua were issued by the Staufer Emperor Frederick II and are an early example of decrees to create a civil servant state .

After the murder of his brother Andreas of Hungary in autumn 1345, the Hungarian King Ludwig I , who came from the House of Anjou , waged a campaign of revenge through southern Italy in 1347. After the siege and capture of Naples , the leader Karl von Durazzo surrendered to the Hungarians and was executed in Naples.

In 1860 Capua was the center of the unsuccessful resistance of the Neapolitan army against Giuseppe Garibaldi . During the Second World War , Capua was badly damaged by air raids. 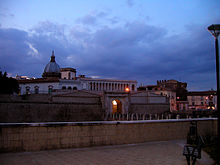 The Norman fort built in 1062, originally outside the city walls, later included in the fortifications

The cathedral of Capua (built in 856) is worth seeing . The city also has a Roman bridge, a medieval castle and an archaeological museum. The museum has a unique collection of so-called Matres-Matutae statues, cult images of a regional cult from the pre-Roman period.

Directly at the Roman bridge, the crossing of the Via Appia over the Volturno, you can find the impressive remains of one of the most famous buildings that were built during the reign of Frederick II : the Capua Bridge Gate . A heavily fortified bridgehead had been built in front of the city since 1234, the shell of which was finished around 1239; Around this time, the emperor - who was under the leadership of Milan in the battle with the Pope and Lombard cities - decided to have the access gate decorated as a marble triumphal gate, the sculptural decoration of which, partly antique and partly newly made, performed secular large-scale sculptures for the first time since Roman times. The stone material for this once extraordinarily impressive gate system, completed in 1247, was largely taken from the gigantic Roman amphitheater in the nearby Santa Maria Capua Vetere (where ancient Capua was once located). Reliefs depicted the victories and triumphs of the emperor, on the city side there were a large number of herms and an antique, laurel-wreathed Jupiter head as a vault closure, on the outside in niches statues of the imperial school of sculpture, including a portrait-like portrait of the emperor, whose trunk has been preserved, while the head was smashed by French revolutionary troops. A museum on the history of the bridge gate and the architecture during the reign of Frederick II of Hohenstaufen is to be set up in the remnants of the bridge gate in the near future.

Close to Capua is also a medieval Benedictine abbey, Sant'Angelo in Formis , with one of the best-preserved Romanesque fresco cycles.

Capua is on State Road 7 , on the A1 motorway and on the Roma – Cassino – Napoli railway that connects it with Naples and Rome . The Capua airfield is located around three kilometers northwest of the city center .

Municipalities in the province of Caserta in the Campania region