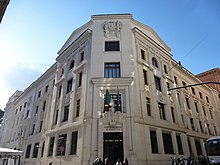 Seat of the Istituto Nazionale di Statistica in Rome

In addition to the census, economic activity (productivity), consumer behavior, everyday culture , health, leisure activities, construction activity and much more are also observed. Recently, in connection with the introduction of the euro , which also led to a (perceived) price increase in Italy (see also Teuro ), the ISTAT's responsibility for the consumer price index has come into the public eye (2002–2005). The selection of the shopping cart , which should not correspond to the actual expenses , was particularly criticized.

In Italy there are two other national institutes in addition to the ISTAT, which have special statistical functions: ISFOL - Istituto per lo sviluppo della formazione professionale dei lavoratori in the field of vocational training and INEA - Istituto nazionale di economia agraria in the field of agriculture. These are also known as Enti di informazione statistica (Authorities for statistical information).

In addition, numerous authorities, corporations and associations have their own statistical offices:

In 2014 ISTAT received the Ig Nobel Prize in the economic field for demonstrating that Italy leads the way in meeting European targets for economic growth - when income from prostitution, drug trafficking, smuggling and illegal financial transactions are included.