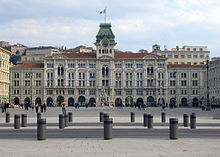 Apart from the special status of Rome as the capital of Italy ( Italian Roma Capitale ), there is no legal difference between the municipalities.

In the regions with a normal statute, the state as a whole is responsible for the local authority , in the regions with a special statute , the respective region is responsible. The relevant statutory decree 267/2000 and the corresponding laws of the regions of Aosta Valley , Trentino-South Tyrol , Friuli-Venezia Giulia , Sicily and Sardinia regulate the interests of the municipalities in a largely uniform manner. There are therefore no different municipal constitutions as in Germany or Switzerland.

As in the regions (and earlier also in the provinces), there are also three main organs in the municipalities:

For communities with between 30,000 and 100,000 inhabitants, there is the possibility of subdividing the community area into districts, which are intended to serve the decentralization of communal functions ( Italian circoscrizioni di decentramento ). This is an obligation for municipalities with more than 100,000 inhabitants.

Extensive communities are scattered over several districts, so-called frazioni (German and in South Tyrol "fractions"). The municipality of Brenner , for example, consists of several factions, including the main town of Gossensaß .

Patrol car of the municipal police of Campiglia Marittima , Province of Livorno

According to the principle of Janus-headedness , a distinction is made between local self-government and contract management.

According to the Italian Constitution (Art. 118), all administrative powers are granted to the municipalities, unless they are expressly delegated to other territorial authorities (provinces, metropolitan cities, regions, general state). In particular, social benefits and spatial planning belong to the original functions of the municipalities.

On behalf of the state, the municipalities manage the electoral, registration and registry offices as well as the statistical offices. They are also responsible for the initial registration of persons eligible for military service and their reporting to the military; because of the suspension of compulsory military service , it is currently recording and reporting.

Most municipalities in Italy also maintain a civil municipal police force ( Italian Polizia Municipale ), which is subordinate to the respective mayor or competent city council and is subject to the legal supervision of the Italian regions or autonomous provinces. As a rule, the municipal police are responsible for regulating and monitoring local road traffic and take on protective and administrative police tasks, unless they are carried out by national police authorities.

The Senatorial Palace in Rome, the official seat of the mayor

According to the constitution, Rome has a special status as the capital of Italy ( Italian Roma Capitale ). This has been made more precise by additional norms granting Rome extended functions: the preservation of cultural goods; social and economic development, with particular reference to manufacturing and tourism; urban development and spatial planning; the organization and operation of urban services, in particular public transport; civil protection.

The metropolitan cities ( Italian Città metropolitane ) are a body provided for by the Italian constitution, which simultaneously takes on all functions of a province and also some superordinate municipal functions.

The metropolitan cities are divided into municipalities, just like the provinces.

For the purpose of applying the electoral system, the municipalities in the regions with normal statutes are divided into two categories.

For municipalities with up to 15,000 inhabitants, the simple majority system applies : The mayor is elected who can collect the most votes; the list that supports him generally receives two thirds of the seats in the municipal council.

For municipalities with more than 15,000 inhabitants, the following applies: If a candidate receives an absolute majority of the votes cast, he will be elected mayor in the first ballot. If no candidate achieves this quorum , a runoff election between the two strongest candidates is required. The coalition of the elected mayor usually gets 60% of the seats in the municipal council.

If the mayor's trust is withdrawn by the municipal council, if he resigns or if he dies, new elections must be called. The same rule applies to provinces and regions. Until a new mayor is elected, the municipality is administered by a government commissioner. As a rule, the term of office of the mayor (and the other municipal bodies) is five years.

The regional electoral laws in the autonomous regions with special statutes have essentially taken over the state regulation. However, there are regional characteristics.

Wall crown in the coat of arms of the municipalities

Wall crown in the coat of arms of cities

By decree of the President of the Republic, municipalities can be elevated to the rank of cities ( Italian città ). This has no legal implications. Such communities are only allowed to decorate their coat of arms with a golden crown. 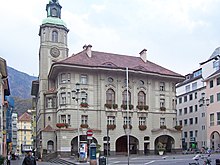 The term municipio (plural municipi ) is commonly used synonymously for comune (derived from the Latin municipalityium ) to express the seat ( town hall ) or the entirety of the municipal authorities.

In the context of incorporations , community districts can also be set up that correspond to the original communities and are also called municipi (referred to in German as local communities according to the legal situation of Trentino-South Tyrol).

According to the local statutes, the sub-areas of municipalities are sometimes referred to as municipi (see, for example, the urban structure of Rome ).

Municipalities can form joint consortia ( consorzi in Italian ), for example for local transport or rubbish collection, and come together to exercise certain functions ( unioni di comuni ) .

The municipal associations are the district communities in South Tyrol , the valley communities ( comunità di valle in Italian ) in Trentino and the unions of the communities ( Unité des Communes ) in the Aosta Valley .