Emblem of the Italian prefectural corps

Schematic structure of an Italian prefecture 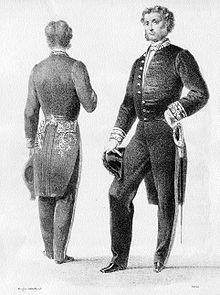 A prefect (Italian prefetto ) denotes the title of higher administrative officer in Italy . The term comes from the Latin praefectus (from praeficere = "to set up") and means in the general sense of the word a head of department or superior .

Since the Italian nation-state emerged in 1861 from the Kingdom of Sardinia-Piedmont , whose administration was organized according to the Napoleonic-French model, the functions of the prefects of Italy and France differ only insignificantly.

Within the higher Italian administrative service, the prefects form a special career group divided into several levels. Prefects are in charge of the Ministry of the Interior or the authorities and organizations in its division. However, you can also work in other areas of government (e.g. as head of the intelligence services or in the office of the Prime Minister ). Its main task, however, is to represent the central government in the provinces : in every province of Italy there is a Prefettura, ufficio territoriale del governo (prefecture - district office of the government). The prefects have the ultimate responsibility for public safety and order in the provinces. They oversee the work of the decentralized national authorities. The order administration of the municipalities (registry offices and registration offices) is also subject to the supervision of the prefect.

In the regions, an official known as the Government Commissioner , i. d. Usually also a prefect, overseeing the decentralized national authorities at regional level and at the same time overseeing the regional government under administrative law . Regional laws could only come into force if they were endorsed by the government commissioner.

In Italy, therefore, as part of the federalization efforts, repeated calls were made to abolish the Napoleonic prefects, especially the government commissioners. They were seen as watchdogs who did not seem to fit into a modern state based on the principle of subsidiarity , a relic from a time when there were no independent regions in the Kingdom of Italy and the self-government rights of the provinces and municipalities were not yet particularly well developed , or were largely abolished under fascism.

An extensive constitutional reform in 2001 abolished the administrative supervision of local authorities and strengthened the autonomy of municipalities and provinces. The office of prefect remains in its role as supervisor of the decentralized national authorities. In emergencies, e.g. In the case of natural disasters and accidents, for example, it has been shown time and again that the coordination and leadership skills of the prefects are extremely useful.

The government commissioners were abolished at the regional level. In particular, the approval for the entry into force of regional laws has been dropped. The prefect in the regional capital today tends to act as an intermediary between the national and regional government (“ambassador inside”) in order to ensure compliance with fair cooperation ( leale collaborazione ).

There is no prefect in the autonomous region of Aosta Valley . Its functions are carried out directly by the president of the region.

For a long time, the prefectural career was based on the career of the higher service in the general Italian ministerial administration and largely shared the designations of the lower offices with this. From the beginning of the 1980s, civil servants up to the equivalent of a government director (A15) were generally converted to employment relationships of a private law nature, sometimes also in the higher offices. Among other things, the prefectural career was excluded, but this was simplified in the course of the reforms. Below is a brief tabular overview of the career development. The official designation Consigliere can be compared, depending on the number of Italian ranks, with the German official designations Government Council , Upper Government Council or Government Director, the others then from Ministerialrat to Ministerialdirektor .

The orders listed vertically under the respective years stand on their own; horizontal comparisons are not or not always possible.

Over time there have been other variations that have not been considered here. If necessary, so-called “political prefects” were appointed directly. They did not go through the careers outlined above, but received the supreme prefectural office directly for political reasons. In this way, especially in the 19th century, influential politicians, including former ministers, were given prefectural posts.