The subfamily Amaryllidoideae belongs to the plant family of the Amaryllis family (Amaryllidaceae) within the order of the asparagus-like (Asparagales). It includes (depending on your perspective) between 59 and 67 genera and more than 800 species , which occur particularly in warmer areas and have an almost worldwide distribution. With around 100 endemic species, the Amaryllidoideae are an important floral element of the Capensis . The name of the eponymous genus Amaryllis is derived from the name of a shepherdess from the Eclogae Virgils . Many species and their varieties are used as ornamental plants in parks, gardens and spaces.

They are perennial herbaceous plants . They are rarely evergreen. Usually these geophytes form bulbs , or sometimes rhizomes (only in Clivia , Cryptostephanus and Scadoxus ), as persistence organs. The bulbs or rhizomes are held at the same depth in the ground by special pulling roots that lengthen or shorten through contraction.

The alternate, spiral or two-line arranged leaves are basal or distributed on the stem. The parallel-veined leaves are stalked or sessile. The simple leaf blade linear or lanceolate. The leaf surfaces are mostly smooth, but in the semi-arid areas of southern Africa the leaf surfaces of Brunsvigia , Crossyne , Gethyllis and Haemanthus species are covered with hairs of different shapes ( trichomes ). The leaves of Crossyne - and some Haemanthus - have attractive dark green or red spots on the leaves. The leaf margin is smooth.

The hermaphrodite, threefold flowers are radial symmetry or zygomorphic . The six bracts are designed the same ( tepals , perigone ); they are free or overgrown. The bracts can be green to white, cream to yellow, red to pink to purple or brown in different combinations, rarely (only in Griffenia , Worsleya and Lycoris ) they are bluish, but not pure blue. There may be a cup-shaped secondary crown (for example, narcissus ). There are almost always two, very rarely only one or more, circles with three stamens each; they are free or fused with one another, they can also be fused with the bloom cladding sheets. Some Griffenia species have five and some Gethyllis species have up to 60 stamens. The stamens are mostly free, but in Pancratium and Hymenocallis grown together cup-shaped over almost their entire length. The three pistils have become an under constant (rare half under permanent) syncarp ovary grown. There are one or three styluses that end in a cephalic or three-lobed stigma. The nectar secretion occurs depending on the tribe through the bracts (Galanthieae) or septal nectaries of the ovary. Often the flowers have a strong scent.

Mostly triple capsule fruits are formed or only berries are formed in the African tribe Gethyllideae and Haemantheae . The winged or wingless seeds are mostly flat and black due to phytomelans or rarely fleshy, rounded and green or red. The seeds contain oils but no starch.

Species of the Amaryllidoideae are distributed from the temperate over the subtropical to the tropical areas of the world. Centers of diversity are South America with around 28 genera and the Capensis with around 18 genera . Although the Mediterranean region is the origin of many ornamental plants, only eight genera are native there. There are only three genera in Australia. In Southern Africa 210 species are endemic. Namaqualand and the Cape region are home to about 111 species, of which about 77% occur only there.

Species of the Amaryllidoideae thrive in many very different habitats , for example seasonally dry areas, ephemeral ponds, the herbaceous layer of rainforests as well as mixed forests and banks of rivers. 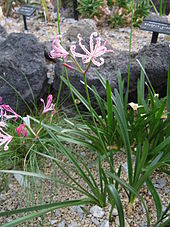 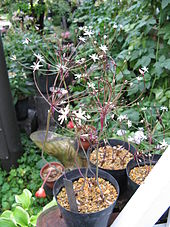 The molecular genetic investigations in the last ten years have led to the fact that the family boundaries within the order of the Asparagales have shifted significantly. The systematics of this subfamily, earlier family, has been discussed for a long time. Subfamilies and tribes were set up and discarded again, so one will often come across seeming inconsistencies in literature. The systematics according to Mark W. Chase et al. 2009. The Amaryllidaceae Family J.St.-Hil. has been greatly expanded. The tribe of the previous Amaryllidaceae remain unchanged only one rank lower in a subfamily Amaryllidoideae Burnett.

The subfamily Amaryllidoideae is divided into 14 tribes and comprises 59 to 70 genera with more than 800 species : 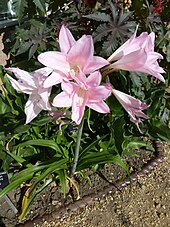 There are some generic hybrids (selection):

Cladogram according to Meerow 2006:

There are varieties of many species in the amaryllis family that are used worldwide as ornamental plants in parks, gardens and in rooms and as cut flowers . As cut flowers, for example, uses nerines ( Nerine ) and amaryllis ( Hippeastrum ). In the temperate latitudes, for example, knot flowers ( Leucojum ), snowdrops ( Galanthus ) and daffodils ( Narcissus ) are used in parks and gardens. In warm temperate and subtropical areas, species and varieties from the genera Amaryllis , Clivia , Hippeastrum, Nerine and Zephyranthes are most commonly used in parks and gardens. As houseplants are Klivie ( Clivia miniata ), the amaryllis ( Hippeastrum ) and rarely haemanthus ( Haemanthus ) used.

Many types are used in traditional folk medicine . Africans used the onions and leaves as compresses and decoctions to treat inflammation and digestive disorders, but in higher doses they are extremely toxic. The South African Zulu used the Clivia rhizomes as a protective spell.

In Peru, the Inca decorated ceremonial drinking vessels with images of Amaryllidaceae flowers ( Ismene , Pyolirion and Stenomesson ). In southern Africa, indigenous peoples rarely depicted plants; the only rock painting of a Brunsvigia -Art in Lesotho perhaps illustrates the importance of the San people of the psychoactive effects were their onions.