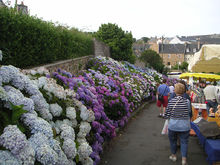 Many ornamental plants can be used in different ways. Hydrangeas are planted here outdoors, but the same species is also a popular houseplant.

Ornamental plants are a hobby of many people. They often deal with individual groups of plants. Examples are cacti , orchids, bulb flowers or fuchsias. There are associations ( plant societies ) for the respective groups , in which interested parties can exchange information and plant material.

Ornamental plants can generally be divided into the following categories:

Indoor plants are types of plants that, due to their size and environmental requirements, can be kept indoors or in larger rooms. One differentiates:

Plants that are cultivated for their floral decorations (small selection; large selection under: houseplant):

Foliage plants are types of plants that are cultivated for their beautiful leaves (small selection; large selection under: houseplant):

Representatives of both groups are both in soil culture as well as in hydroponics found. 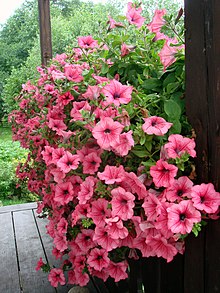 Carnivorous plants are kept as houseplant primarily because of their exceptional food intake.

These are often only one or two years old (but there are also woody representatives such as subshrubs), are used in window boxes, borders, pots and beds and are usually also cultivated for their flowers or inflorescences.

A bouquet of roses , freesias , lilies , Zantedeschia and accessories

These are ornamental plants that sprout from bulbs or tubers after a hibernation and usually only bloom in spring. Bulb and tuber plants also have striking flower or inflorescence decorations. 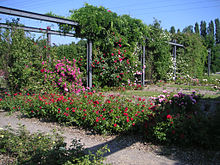 Roses in the Nordsternpark Gelsenkirchen

Rhododendron in a cemetery

Ornamental trees are trees that are planted in parks , all types of gardens , cemeteries , but also as flower beds in order to beautify them. They are differentiated from crops because they do not provide any benefits such as vegetables or edible fruits. Ornamental trees often also bear berries, but these are not edible. The term ornamental trees refers to deciduous and coniferous trees of all sizes and types.

Plants were cultivated by humans as early as the Neolithic . However, this only served for agriculture and thus for food acquisition, the cultivation of plants purely because of their attractive appearance was only pursued at a later time. One of the oldest cultivated ornamental plants is the rose . Their decorative flowers were also initially used as food, but people began to create rose gardens for decorative purposes very early on. The first gardens were created in China around 2,700 BC. Chr.

Many ornamental plants that were introduced to Europe originally served as crops in their countries of origin . Ornamental plants, which were supposed to please the eyes and smell in the Middle Ages, were often used in perfume and cosmetics manufacture. In the gardens of the Renaissance and the Baroque , the exotic plants were used as eye-catchers. Numerous historical ornamental plants are now being replaced by new breeds. In favor of large-flowered and new varieties, somewhat more inconspicuous but more robust varieties such as the gold poppy , the zinnia or the almond rose are disappearing .

In Germany, since the 2000s, there has been increasing noticeable development and optimization of the cultivation of ornamental plants towards sustainable and ecological production. Garden academies exist in eight federal states with the common goal of supporting environmentally friendly horticulture. These are integrated into state test and research facilities or chambers of agriculture.

Works of art created for decoration, such as painting, weaving and architecture, often show depictions of plants and (above all ornamental) forms derived from the plant world (e.g. in building sculpture or book illumination). Their depiction is partly associated with myths and legends.