The title of this article is ambiguous. Further meanings are listed under Staude (disambiguation) . 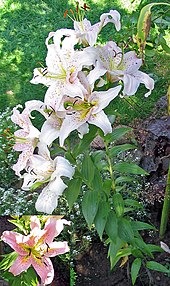 Perennial (from Middle High German  stûde ) is essentially a horticultural term for flowering plants that emerge from the roots again, and is also used by botanists in identification books (with the symbol ♃ " Jupiter ") .

Perennials are perennial (perennial, pollakanthe ) herbaceous plants whose above-ground parts of the plant, unlike trees and shrubs, are not (or only slightly) lignified , but rather herbaceous and soft and usually die after each vegetation period .

In contrast to the other herbaceous plants, perennials survive for several years and bloom and fruit (usually) again every year, while the annuals , biennials and the other perennial ( hapaxanthene or pluriennen ) herbaceous plants die off after flowering.

Perennials overwinter depending on the species in the form of rhizomes (popularly called rhizomes , but actually parts of the shoot), tubers , bulbs , stolons (runners, parts of the shoot) and similar root storage organs, which are both under the earth's surface (geo- or cryptophytes ) as well as just above ( hemicryptophytes ). The perennials sprout from the wintering buds again and again in the following growing seasons. Notwithstanding this rule, there are also a number of perennial perennials that do not “move in”. In the cold and temperate zones these are so low that they are covered by snow and are grouped together with the woody dwarf shrubs under the term Chamaephytes ; tropical evergreen perennials such as bananas , on the other hand, can reach considerable sizes. The term “perennial” is not clearly defined, but the term “herbs”, which is occasionally also used for perennials, has many meanings and uses and is therefore even less delimited.

Horticultural systematics of the perennials

The spectrum of perennials ranges from small succulents (fleshy, juicy perennials that have especially adapted to the drought, but are usually not referred to as perennials) to large, magnificent perennials. In addition to the actual "flowering perennials", perennials also include most of the hardy ferns as well as many grasses, bulbous or bulbous plants and aquatic plants.

In order to meet the different location requirements of the perennials, they are horticultural categorized into different areas of life:

With this classification, which was developed by Sieber / Hansen and Ellenberg / Oberdorfer, the garden planning professionals take into account the different conditions of the respective location.

Use of perennials in the garden

The perennials in private and public gardens come from the temperate climates of all continents . The range of native perennials and the perennials from the Mediterranean area, which have been cultivated in Central European gardens for centuries, has been increasingly expanded over the past three centuries by a large number of perennials, especially from Asia and North America.

Until about the mid-19th century also mainly indigenous certain spice - and medicinal plants , the range of perennials in the gardens. Ornamental shrubs were initially only found there in small numbers. Since the supply of perennials had increased significantly from the middle of the 18th century through imports from foreign countries and intensified breeding work, English perennial experts such as William Robinson (1838–1935) and Gertrude Jekyll (1843–1932) initiated the compilation of perennials from 1870 onwards to artistic plantings according to not only purely aesthetic points of view. In Germany, the perennial grower and garden poet Karl Foerster aroused enthusiasm for the use of perennials in the garden in the first half of the 20th century with books such as The Flower Garden of the Future (1917).

While in Great Britain, due to the favorable climate, perennials are mainly used according to their aesthetic qualities, interest in German-speaking countries is increasingly directed towards the use of perennials based on the natural site conditions. The assignment of perennials to areas of life such as wood, wood border, open space, stone plant, bed or water edge enables the compilation of long-lasting plant communities for planting areas of various kinds in a simple manner .

Perennials in the public green

For several years now, numerous institutions have been dealing with the topic of perennials for public greenery . The Silbersommer perennial mix emerged from the Plant Use Working Group of the Federation of German Perennial Gardeners (BdS), which has already been successfully tested and used at various locations in Germany and Switzerland. At the Anhalt University of Applied Sciences in Bernburg (Saxony-Anhalt), the Perennemix research project supported a. a. Tested by the German Research Foundation (DFG) and the BdS, mixed shrub plantings for public greenery.

Perennial of the year

Since the year 2000, the Association of German Perennial Gardeners has named a horticultural important plant genus as Perennial of the Year .