The title of this article is ambiguous. For the philosophical concept, see rhizome (philosophy) .

The rhizome (with stalk) of the bamboo species Phyllostachys reticulata 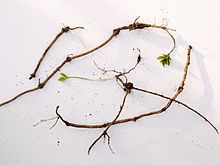 Rhizome of the lily of the valley , cross section, fluorescent staining

A rhizome ( ancient Greek ῥίζωμα rhizome "ingrained") is in the Botany a mostly underground or densely growing above ground stems system ( "earthborn"). Because of its mostly subterranean location and the numerous sprouting roots , it is often called rhizome .

The rhizome is an underground, horizontally growing stem that is formed by many herbaceous plants . It shows typical features of the shoot system, but no root features . It forms short, thickened internodes , leaf scars and an arrangement of vascular bundles identical to that of the shoot . Roots form sprout. Leaves are created as scaly lower leaves and are often used to store reserve materials (especially starch ), which means that the rhizome can also be used by the plant for wintering in the ground.

The rhizome as part of a medicinal plant ( rhizoma ) can be used for the manufacture of pharmaceutical drugs .

Typical rhizomes form, for example, ground elder , wood anemone , bracken and lily of the valley . Further examples are madder , horsetail , sedge , bamboo and many other grasses , many types of iris , flower cane ( canna ) or asparagus , the edible rhizomes ginger , turmeric ( turmeric ), lotus , galangal , the herbs hellebore and violet root , as well as the invasive ones neophytes miscanthus , world Green , knotweed . From a horticultural point of view, ivy and bamboo form particularly aggressive rhizomes.

Piece of rhizome with shoot of Sansevieria trifasciata

In horticultural practice, plants that form a rhizome can easily be propagated vegetatively . The stem axis is divided into several short pieces with a sharp knife, from the buds of which whole plants can grow again. This horticultural technique should not be confused with the division of the cane .