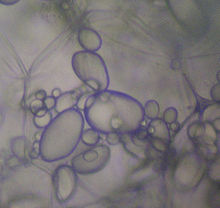 Substances of the primary metabolism are referred to as reserve material (also storage material ) , which are stored by living beings in larger quantities over sometimes longer periods of time in order to be introduced back into the metabolism at a later point in time. Reserve substances come from the substance groups of carbohydrates , lipids and proteins .

In animals , the most important energy reserves are carbohydrates (such as glycogen ) and fats .

In plants , the function of storage ( allocation (botany) ) is often performed by special cells, tissues or organs. The most important group of substances here are the carbohydrates, whereby sucrose and fructans are stored in dissolved form in the vacuole , and starch in plastids (especially amyloplasts ). Storage proteins are mainly formed in seeds , such as the globulins of the Fabaceae or the prolamins and glutelins of the sweet grasses (Poaceae). Storage lipids are found in plants as liquid oils because they have a high proportion of unsaturated fatty acids . Lipids are the main storage substances in some algae and in the fruits of some plants: for example, common flax , rapeseed , castor , sunflower and peanut . The lipids can be stored in the endosperm , in the cotyledons or - as with the olive - in the pulp. Inside the cells, the lipids are stored in oleosomes .

Some prokaryotes also store inorganic substances from which they can obtain energy. Sulfur bacteria can store elemental sulfur , which they oxidize to sulfate.