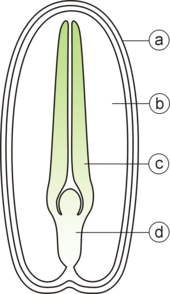 Scheme of the structure of a seed of a dicotyledonous plant. The internal embryo consists of the cotyledons (c) and the hypocotyl (d). It is surrounded by the endosperm (b) and this by the seed coat (a).

The endosperm (from ancient Greek ἔνδον endon , German 'inside' and ancient Greek σπέρμα spérma , German 'seed' ) is one of the three main components of the seed of the seed plants (spermatophyta). It typically surrounds the embryo and is in turn enclosed by the seed coat. During the development of the seed, it nourishes the embryo by mediating the supply of nutrients. In most seed plants, it also stores nutrients itself and remains in the ripe seed as nutrient tissue during germinationnourishes the seedling. The discoverer of the endosperm was Joseph Gärtner , who distinguished it from the embryo in De fructibus et seminibus plantarum (1788/91).

In the nude-seeded plants (Gymnospermae), to which the conifers belong, a haploid endosperm develops from the female gametophyte (primary endosperm). In the angiosperms (Angiospermae, flowering plants) one finds double fertilization take place in addition to the egg and the diploid secondary embryo sac nucleus is fertilized and then a triploid cell produced, stating the triploid endosperm secondary. In the water lily family and the evening primrose family , only a haploid pole core is fertilized, and the endosperm is consequently diploid, while the pepper family and the lead root family show higher degrees of ploidy in the endosperm.

The development of the endosperm of most flowering plants begins shortly after fertilization with a coenocytic or nuclear phase in which a multinucleated coenocyte is formed through free nuclear divisions ( mitoses ) without subsequent cell divisions . In the thale cress ( Arabidopsis thaliana ), the best studied model organism , resulting from eight consecutive mitoses about 200 nuclei which are in the periphery of the Coenocyten, while its inner region by a large vacuole is filled. In contrast, the coenocytic phase in the sunflower ends after three mitoses (fewer than 10 cell nuclei), and in some plants it disappears completely. Normally it ends when cell walls are formed between all neighboring cell nuclei at the same time and starting from the wall surrounding the coenocytes . In this way, open chambers (alveoli), which each contain a cell nucleus and the cytoplasm surrounding it, arise inwards, towards the vacuole . Subsequently , further layers of alveoli are formed by synchronous pericline cell divisions towards the vacuole, while the previous alveoli are closed. This continues until the vacuole has disappeared and the entire endosperm is cellularly structured.

The further development was mainly examined in the case of sweet grasses ( cereals ). With them, after the cellularization just described has been completed, the endosperm begins to grow rapidly, which is achieved through further cell division and an enlargement of the cells. In most cells, amyloplasts produce and store large amounts of starch ; in addition, storage proteins ( prolamins ) are also accumulated to a lesser extent . These cells eventually die ( programmed cell death ) and form at the ripe grain to the endosperm , which consists mainly of starch grains (dead Amyloplasts) and protein. In contrast, one or more peripheral cell layers remain alive as aleurone layer . During germination, they form enzymes to mobilize the reserve substances in the endosperm.

In the coconut palm, the endosperm remains largely in the form of liquid coenocytium (coconut water) until the end. Only when the coconut is about 15 cm long does cellularization begin in the periphery, from which the firm pulp emerges. On the other hand, in various families of flowering plants, the endosperm develops cellularly from the start: every division of the nucleus is associated with a division of cells.

Some flowering plants, in addition to or instead of the endosperm, form the perisperm as a nutrient tissue that emerges from the surrounding maternal tissue, the nucellus . The function of nutrient storage can also be completely or partially taken over by the cotyledons , for example in legumes , walnuts and avocados . The hypocotyl rarely takes on this function, as is the case with the Brazil nut . The extremely small seeds of the orchids have little or no endosperm and are dependent on symbiotic nutrition by fungi ( mycotrophy , mycorrhiza ) during germination .

The earliest stages of the development of insects ( superficial furrowing ) show a similar course of development as in the nuclear endosperm .