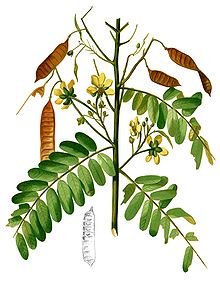 The legumes (Fabaceae or Leguminosae; formerly: Papilionaceae), also called legumes , are one of the most species-rich plant families and belong to the order of the butterfly-like (Fabales). It comprises three subfamilies, which are often treated as separate families, and other tribes , with a total of about 730 genera and almost 20,000 species - with the largest genus within the vascular plants : Astragalus with around 2000 species. The origin of the family is believed to be in the late Cretaceous period (65 to 70 million years ago).

The legumes are one of the few families that have two valid, alternatively usable scientific names: The name Leguminosae was created by Michel Adanson in 1763. It was not until 1836 that John Lindley created the new name Fabaceae. The nomenclature type for both names is the genus Faba Miller , a synonym of Vicia L.

There are, firstly, one to two years , or perennial herbaceous plants or other woody plants: trees , shrubs and vines . They grow upright, creeping or climbing on their own. In a number of species or cultivars of cultivated plants, the stem axes usually perform circular movements in, less often counter-clockwise; they are twisting plants that climb up other plants or objects. Some types are epiphytes . Some species have xerophytic adaptations. The plants can be armed with spines or thorns.

The mostly alternate leaves are usually pinnate. All subfamilies originally have leaflets , which in some genera and species can be reduced to the terminal leaflets , such as the dyer's gorse ( Genista tinctoria ), or consist of only three leaflets, as in the clover species ( Trifolium ). They can be very different in size.

There are stipules that can be very different depending on the species. The stipules can be transformed into thorns ("stipple-leaf thorns"), as in the robinia ( Robinia pseudoacacia ), or they are particularly large , as in the vine pea ( Lathyrus aphaca ), and take on the main assimilation function , since the actual leaf organs are transformed into tendrils . Some species have a thickened point in the lower part of the stipule that can cause movement ("pulvinus").

In some species the leaves are reduced and phyllodes take on the task of photosynthesis .

The mostly hermaphrodite, radially symmetrical to zygomorphic flowers are usually five-fold with a double perianth . Particularly in the Mimosoideae there are also single-sexed ( monoecious ) species. The mostly five (three to six) sepals are fused. The subfamilies differ particularly in the structure of the flowers.

In the bud position the petals Faboideae have a descending cover, but in the Caesalpinioideae with an ascending cover. There are usually five (one to five) petals available; at least three petals are free from each other. The typical butterfly blooms , it comes to the corolla, is caused by the formation of mostly five flower petals . The upper, mostly upright petal is called a flag ("Vexillum"), the two on the side are called wings ("Alae"), and the two lower ones are more or less strongly fused or glued together and form the shuttle ("Carina"). The petals can be nailed. Only 26 genera of the Caesalpinioideae, some genera of the Swartzieae and Amorphieae are missing bracts, then the stamens are most conspicuous and bats usually serve as pollinators.

If ten stamens are present, then in the Faboideae they are mostly all or only nine fused and form a long tube (or groove in 9 fused) that surrounds the carpel; or the stamens are free from each other ( Sophora ). The Mimosoideae have three to one hundred stamens. Only one or two stamens are rarely present. In a few taxa the stamens are fused with the petals. Either all of the stamens are fertile or some of them have been converted to staminodes . The pollen grains usually have three or six, more rarely two, four or no apertures; they are mostly colporat, or more rarely porat, colpat, or rugat; they are almost always two-celled or three-celled in a few Mimosoideae. In each flower there is usually only one upper carpel ; a few Mimosoideae have two to 16 free carpels.

Pollination is carried out by insects ( entomophilia ), birds ( ornithophilia , especially in South Australian species) or bats ( chiropterophilia ). The transmission mechanisms of pollen to insects during pollination are very interesting for many species, for example there is an "explosion mechanism" ( broom broom , Cytisus scoparius ) or a "folding mechanism" ( dyer's gorse , Genista tinctoria ).

The legumes get their name from the " legume ", a type of fruit that only occurs here. A legume is formed, which usually opens at the seams of the abdomen and back when ripe. Joint pods with broken fruits ( small bird's foot , Ornithopus perpusillus ), which develop into nuts, are also less common . Some taxa also produce follicles , samara , acane or stone fruit-like fruits. In some Mimosoideae, several fruits can also be combined into one collective fruit . The fruits contain one to a hundred seeds. The small to very large seeds are mostly wingless or rarely have wings, as in some Mimosoideae. The starchy or free seeds may have a micropyle , which may be zigzag shaped.

Symbiosis with bacteria and fungi

Most legumes enter into a symbiosis in their root nodules with nitrogen-fixing bacteria ( rhizobia ). This makes them independent of the nitrate content of the soil and only becomes viable in extremely low-nitrogen soils (for example acacias in the “desert”). Legumes are able to form the oxygen-binding protein leghemoglobin to protect bacteria from atmospheric oxygen .

With their rhizobia, legumes contribute to the fertility of the soil (see green manure ). In agriculture, they are therefore pleased to amelioration than crops grown. Nitrogen fixation can reach 100 kg / ha per month.

In company with the kidney bean ( Phaseolus vulgaris ), a fungus was discovered that infects insects and transfers their nitrogen to the plant.

Legumes are very nutrient-rich plants that contain plenty of proteins, vitamins and minerals, but also anti -nutrient substances. The anti-nutritional ingredients are the reason why legumes usually have to be processed by cooking and / or sprouting.

So-called lectins or glycoproteins are found in the seeds of many species of the Fabaceae . These can form specific bonds with carbohydrate groups of glycolipids or glycoproteins on cell surfaces, similar to antigen-antibody reactions. The reaction can be blood group-specific. Toxic lectins are widespread; at Phaseolus, for example, these are responsible for the toxicity of raw fruits.

They often contain alkaloids . Quinolizidine alkaloids are used to protect against eating; in the case of so-called "sweet lupins" they were removed by breeding so that these varieties can be grown as animal feed. Other cyanogenic compounds also act as protection against feeding.

Also saponins are an important ingredient group. Flavonols may be present.

Due to their high protein content ( legumin ), the fruits and seeds of legumes are an important part of human nutrition almost worldwide. They are almost indispensable, especially for low-meat or vegetarian meals. Examples include peas , chickpeas , beans , azuki beans , lima beans and lentils leading to the subfamily of the Pea family include (Faboideae). Often only the seeds are eaten and colloquially the seeds - totum pro parte - are usually called “legumes”. For example, green beans and sugar peas are the fruits that are eaten. Some legumes can also be eaten raw ( e.g. sugar peas ), but many are harmful to health in their raw state and must be soaked in water before consumption, as they are stored in a dry state, and then cooked completely.

The majority of the carbohydrates contained in legumes are multiple sugars , especially raffinose ; these are indigestible for humans and therefore cause flatulence . The high fiber content of legumes is also due to this fact, because indigestible carbohydrates are nothing more than fiber.

In Europe, most of the legumes grown are used as feed for ruminants, pigs and chickens. Peas , field beans , lupins and soybeans are especially grown for feeding . Approx. 70% of the demand for protein-rich animal feed in Europe is covered by imports of soybeans, mainly from Latin America .

The positive environmental effects of legumes have led to these crops being promoted within the framework of the common agricultural policy. From an economic point of view, the cultures are still not very attractive if they are compared as individual cultures. If their previous crop value is taken into account in the crop rotation, legumes can be economically attractive under certain conditions. For such an assessment, models have been developed which confirm this assumption and at the same time show that large amounts of nitrogen fertilizer can be saved and nitrous oxide emissions reduced.

Many types are supplied by tropical woods ( rosewood : Dalbergia and Machaerium types, Sophora types). Robinia was planted as a forest plant in the temperate zones and has grown wild. Many species and their varieties are used as ornamental plants .