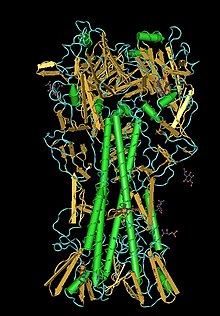 Lectins are complex proteins or glycoproteins that bind specific carbohydrate structures and are therefore able to bind specifically to cells or cell membranes and trigger biochemical reactions from there. However, they do not have any enzymatic activity.

Lectins ( Latin legere , reading ',' select '), various metabolic processes such as cell division , the ribosomal protein biosynthesis , the agglutination of cells (in terms of red blood cells is a hemagglutination ) or the immune system ( Ficoline influence).

Lectins are common. They can be produced by animals, plants or microorganisms.

Lectins also include some AB toxins such as B. high-molecular seed glycoproteins such as ricin or such as the bacterial toxins Shiga toxin , Vero toxin , diphtheria toxin , exotoxin A or alpha-sarcin . Abrin , ricin , phasine (after Phaseolus vulgaris , the common bean : Red kidney bean lectin, erythroagglutinin, PHA-E, Phaseolin ) and IgSF ( English I-type lectins 'I type lectins'), calnexin and calreticulin are different lectins. An example of a lectin without sugar residue is Concanavalin A from the seeds of the jack bean Canavalia ensiformis .

Lectins of plant origin are found in vegetables, so that the digestive tract of the human lectins is regularly exposed. Some lectins can be toxic to humans or pets in their raw state and only become irreversibly inactivated when they are cooked. Cultivated vegetables (e.g. kidney beans) with such poisonous lectins should only be consumed cooked.

The effect of lectins in the diet, according to some researchers, is to cause them to clump red blood cells. At the end of the 1990s, the naturopathic researcher Peter J. D'Adamo developed a so-called blood group diet based on his research . However, no evidence has yet been found of the supposed health benefits of this diet.

Above a certain amount, some lectins lead to headaches, vomiting, diarrhea as well as stomach and intestinal problems; in extreme cases, consumption can be fatal. In particularly lektinreichen species, such as red beans , already four or five raw seeds can cause serious symptoms in adults. Symptoms of poisoning appear quickly, usually one to three hours after consumption, and usually disappear again just as quickly - about three to four hours after onset.

In their mode of action, lectins are often similar to antibiotics . So Ricin is a potent inhibitor of ribosomal protein biosynthesis. In some cases, lectins have a toxic effect on small organisms and are therefore used as pesticides against insects .

Lectins are usually attached to the outer membrane surface . They also play a role in the communication and interaction of cells and organisms. For example, they are involved in many recognition processes. With the help of the lectin- polysaccharide interaction, bacteria such as Rhizobium trifolii can attach themselves to the roots of clover . The symbiosis of nodule bacteria and leguminous legumes is only possible with the detection and is therefore specific.

Similar recognition mechanisms play a role in the fertilization of the human egg cell .

Lectins can play a role in ontogenesis . Some plant lectins are inactivated by the germination process .

Examples of lectins are calnexin and calreticulin , which serve as chaperones in protein folding.

The following table shows the lectin content of various legumes (according to the USFDA ):