The runner bean or wool bean , in Austria also Käferbohne called ( Phaseolus coccineus ) is a plant from the genus Phaseolus in the subfamily of the Pea family (Faboideae) within the family of legumes (Fabaceae or Leguminosae). The bright red flower is eponymous for the fire bean. Other common names are runner beans, flower beans, make-up beans, Turkish beans, Arabian beans or the Greek gigantes . This crop is closely related to a number of other crops called " beans ", including the smaller kidney bean . 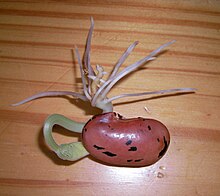 Inflorescence with zygomorphic but not strictly symmetrical flowers

The fire bean grows as a left-hand winding, usually annual, but also biennial and perennial herbaceous creeper in frost-free areas . The fire bean is a long-day plant . The cotyledons remain in the soil, so they do not turn green: hypogean germination . In perennial plants, the root thickens into a spindle-shaped tuber 2 to 3 centimeters thick . The stem , usually 2 to 4, rarely up to 7 meters long, round in the lower part and hexagonal in the upper part, is always left-winding , as with the common bean . The stem is initially weak and hairy and later balding.

Arranged alternate and helically distributed on the stem leaves are divided into petiole and leaf blade. The hexagonal petiole has a groove at the top. The leaf stalk and the pinnate stalks have joints that function via turgor changes. The leaves perform pronounced nyctinastic movements, when it gets dark they take a sleeping position. The imparipinnate leaf blade consists of three pinnate leaves . The relatively large leaflets are broadly ovate. Of the relatively rough leaf surfaces, the upper side is clearly hairy and shiny dark green, and the underside is lighter green; Network nerves are clearly visible. The leaf margin is smooth or, less often, slightly curved. The glandular hairs on the underside of the leaf give off a secretion containing potassium carbonate , which has a hygroscopic effect, which enables water to be absorbed from the air. Both the stipules (stipules) and the stipules (stipules) of the pinnate leaves are relatively small and short-lanceolate.

The flowering period extends from June to September. The inflorescences are usually longer than the leaves with a length of 25 to 35 centimeters. The inflorescences contain six to ten pairs of flowers in the axils of small ovate bracts. The flower stalk is relatively long. The hermaphroditic flowers are 1.5 to 3.0 centimeters in height and are slightly asymmetrical, zygomorphic and five-fold with a double flower envelope . The calyx consists of two lips and the upper calyx teeth are significantly shorter than the others. The short flag has been repulsed. The relatively large wings are wide. The shuttle and ovary are rolled up like a screw. The relatively short stylus is thick. In terms of flower ecology, the fire bean is a pollen butterfly flower with a brush mechanism, so that the pollination mechanism can only be triggered by large Apidae . The flowers are self-sterile .

The legumes are up to 25 cm long. The kidney-shaped seeds are up to 2.5 cm long and mostly brown, red, black and purple piebald or completely white. In the cultivated forms, the legumes usually remain closed, the wild forms spread as desiccation spreaders. The kidney-shaped seeds of the fir bean contain 18.4% crude protein , 1.8 to 2.9% crude fat , 4.4% N-free extracts , 6.8% crude fiber , 3.8% ash and 15.0% water.

The fire bean originates from South America and was brought to Europe in the 17th century. Since the fire bean tolerates cold better than the garden bean, it can be found today from northern to southern Europe and is also cultivated at higher altitudes in Austria.

In Central Europe the bean is grown as an annual plant ; it can be perennial in countries with milder climates . In Europe, fire beans are widely planted as ornamental plants. For food production, the fire bean is usually cultivated on 4 to 5 meter long poles because of its height, which are placed against each other in a tent and connected to each other for better stability. Sometimes the beans are also grown together with corn , with the corn plants replacing the stalks. This method is associated with less effort, since the harvest can be carried out with a combine harvester. After that, however, the harvest must be sorted.

The flowers , the young legumes and the dried seeds are used as food. The raw beans contain around 1.2% harmful lectins and are therefore toxic. The structure of this poison is destroyed by heating to at least 75 ° C, so that cooked beans can be consumed without hesitation.

The beetle bean salad made from cooked seeds with fresh onion slices, vinegar and Styrian pumpkin seed oil is a specialty in Austrian Styria . The beetle bean is traditionally popular in Styria and can be found at every farmer's market. In 2016, the Styrian beetle bean was also recognized by the EU as a protected designation of origin .

The "Fasolia Gigantes" ( Greek φασόλια γίγαντες , giant beans ' ) are white-flowering Greek varieties of the fire bean with a protected geographical name. The ripe beans are white to light brown and up to 2.5 inches long. They are grown in northern Greece in the Kato Nevrokopi , Florina and Kastoria regions . It plays an important role in Greek cuisine , where the young green pods and the dried bean seeds are prepared in many ways. From Greece, other Mediterranean countries and North Africa, the fresh flat pods come on the market early in the year as “green beans” or “broad beans”, which can be distinguished from the pods of garden beans by their size and rougher skin.