The Pea (Faboideae) are a diverse subfamily of the family of legumes (Fabaceae). There are many species in this subfamily that are used by humans in a wide variety of ways. There are a variety of reports of interactions between animal species and species in this subfamily. Due to the nodule bacteria , they are important for many ecosystems, but also for agricultural soils as green manure.

Overall, this species-rich subfamily is very diverse and only a few common features can be named.

They are woody plants: trees , bushes and also some lianas ; or they are herbaceous plants : annual to perennial.

The leaves are usually arranged alternately. Feathered leaves are considered to be original; this can be paired or unpaired: however, numerous modifications and metamorphoses occur, e.g. E.g. three-leaved ( clover ) or single-leaved ( tragacanth ). Stipules (stipples) are present and are often important identifying features at the genus and species level, because they are very diverse: from long-lasting to quickly perishable, from tiny to conspicuously large, they can grow together with the petioles to a greater or lesser extent and there are many shapes . The stipules can be transformed into thorns ( Robinia ) or take on leaf function, since deciduous leaves are transformed into tendrils ( Lathyrus aphaca ).

The hermaphrodite flowers are zygomorphic and five-fold. There are five (but often four) sepals . As a rule, there are five petals , which are arranged in the typical shape of the butterfly flowers as a characteristic feature of this subfamily . The middle upper petal is often enlarged and curved upwards (in the picture on the right a little darker reddish). It is called a "flag". The two lower petals are fused or at least glued to one another and form a keeled, boat-like tub, often curved upwards at the tip, the "boat". In this the stamens and the carpel are consisting of ovary , style and stigma. Finally, the two lateral petals form the so-called "wings" next to the shuttle. Often they completely cover the boat. This type of flower is called a "butterfly flower". The number of stamens is ten (rarely nine or five). The stamens are fused together except for one that is free. The flower formula of the Faboideae is or , but there are numerous deviations from this for genera or species.

Flower diagrams of the Faboideae

The legumes get their name from the " legume ", a type of fruit that occurs only in this family. 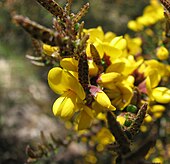 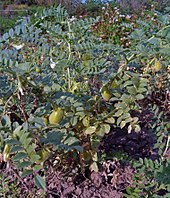 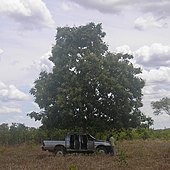 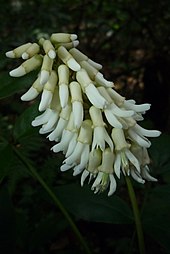 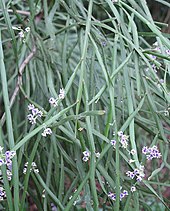 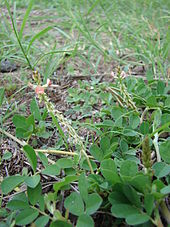 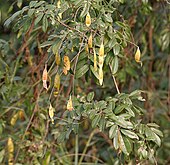 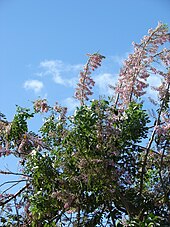 The subfamily comprises about 420 genera and more than 12,000 species. They occur from the tropics to the arctic regions. However, they prefer dry areas or at least areas with a pronounced annual dry season . Most species are found in the temperate latitudes of the northern hemisphere .

The subfamily Faboideae is divided into the following 28 tribes , here with all the genera contained therein (or in the article on the tribe):

Overview of the genera of the butterflies (Faboideae)

The wood is used, for example, by the genera balsam trees ( Myroxylon ) and Robinia ( Robinia ).