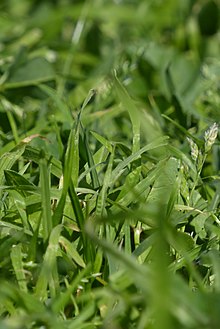 Herbaceous plants do not show any secondary growth and therefore do not lignify . There are annual , biennial and perennial herbaceous plants, all of which die after flowering and are differentiated in botany from the perennial plants that bloom annually (or at least several times).

Many perennial herbaceous plants let their green, aboveground parts die off in order to survive the cold or dry season in storage organs and to sprout again when the conditions are favorable for new growth . In contrast, most tropical plants are evergreen .

The counterpart to herbaceous plants are perennial, woody plants, i.e. shrubs and trees . Herbaceous and woody plants generally differ in their growth habit .

The assignment of a plant to the group of herbaceous or woody is not always clearly possible. The perennial subshrubs , to which the sage is one, occupy a transitional position . With them, only the part of the above-ground shoots near the ground becomes lignified.

In horticultural parlance, perennial herbaceous plants of the temperate zones are also referred to as perennials (while tropical, evergreen plants, with the exception of the banana tree, are not always considered perennials).

There are also herbaceous and woody taxa in climbing plants .

"Herbs" such as weeds , culinary herbs or medicinal herbs are only subgroups of the broader term herbaceous plants .

In pharmacy , Herba (literally: "herb") denotes unsorted leaf and stem parts and also inflorescences of medicinal herbs regardless of the botanical system. Herba here means “the useful parts of the plant”, in contrast to Planta (“the whole plant”).

In connection with food , herbaceous and woody refers unspecifically to coarse-fiber and woody parts, in contrast to the soft tissues suitable for consumption .

Herbaceous plants exist in the following forms of life: