Thick growth of a tree surrounds a sawed-off lamp post.

In addition to growth in length, growth in thickness is also of decisive importance for plants . On the one hand, a large circumference of the stem axis offers greater stability and, on the other hand, it enables increased transport capacity. A distinction is made between primary and secondary growth in thickness.

The apex of the shoot (the apical meristem ) not only releases cells in the opposite direction to the direction of growth, but also perpendicular to it, whereby the shoot axis receives its primary horizontal extension. Most cells that are separated from meristems differentiate, that is, they lose their ability to divide. In many plants, the width of the stem axis is already determined a few millimeters after the stem tip. This is especially the case with most monocot and annual plants . The primary growth in thickness is particularly significant in the case of the palms , which develop their final diameter as young plants. Here, however, the lignified leaf bases provide additional stabilization.

As the plant grows, the size of the apical meristem often increases, which leads to a small expansion of the stem axis without secondary growth in thickness (see below). Here one speaks of strengthening growth. However, the apical meristem then shrinks again in the transition to the flowering phase, which leads to a minimally double-conical shape of the stem axis, which is particularly noticeable in monocotyledons , since sec. Growth in thickness does not subsequently change this shape. 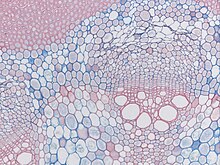 For trees, a primary growth in thickness is neither sufficient for their stability nor for the supply requirements of the individual organs. Heights of over 100 meters have to be overcome and weights of more than a ton must be carried. To achieve such a drastic gain, some cells retain their ability to divide. The cambium is made up of them . This secondary education tissue forms the vascular tissue and ensures the massive reinforcement of the stem axis by wood formation and increase in diameter. It separates the xylem from the phloem and thus the wood from the bast . This process is called secondary growth in thickness, a distinction being made between the secondary growth in thickness of naked samers (gymnosperms) and that of bedecktsamern (angiosperms).

In the temperate zones there is a seasonal formation of early and late wood, which leads to the formation of annual rings . These are due to the wider pores of the water-conducting elements of the xylem in the early wood and narrower in the late wood, whereby gymnosperms only have tracheids , while angiosperms also have tracheas . In science ( dendrochronology ), data series on the width of these annual rings are used to date wood and to analyze the climate in which the wood was created.

Also the phellogen plays a sometimes large role in the secondary thickness growth. This is particularly clear with the cork oak ( Quercus suber ). The cork cambium gives off cells inside that form the phelloderm , which is a parenchymal living tissue. The cells that the cork cambium emits to the outside are called cork cells (these form the phelleme ). Your cell walls are lined with suberin , creating a water-impermeable layer.

The monocot plants have lost the cambium in the course of the tribal history . Although some representatives such as the dragon trees ( Dracaena ), club lilies ( Cordyline ) and yucca species as well as the quiver tree ( Aloe dichotoma ) form a secondary cambium, in contrast to the cambium of the original wood plants, this is not between xylem and phloem , but outside the conduction path , which here is designed as an ataktostele ( i.e. the vascular bundles are distributed over the entire stem cross-section ) in contrast to the eustele of other secondary thickened plants, in which the vascular bundles are arranged in a ring.