This article or section is not worded in a generally understandable manner. The shortcomings are described under Discussion: Overcast . If you remove this module, please explain this on the article discussion page and add the automatically created project page section Wikipedia: Incomprehensible articles #Bedecktsamer um{{ Done | 1 = ~~~~}}.

The bedecktsamer are characterized by the following derived characteristics ( synapomorphies ), which distinguish them from the other seed plants: In the phloem , sieve tubes and escort cells arise from a common mother cell. In the xylem can be found in contrast to Nacktsamigen plants in addition to tracheids and trachea . The stamens have two laterally sitting pairs of pollen sacs. The anthers have a hypodermic endothecium . The pollen grains usually do not have laminated endexins .

The male gametophyte consists of three cells. The ovules are enclosed in a closed carpel (hence the name Bedecktsamer). The walls of the megaspores have no sporopollenin . There is double fertilization and, related to it, a secondary endosperm . 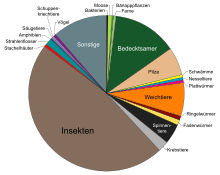 After the insects , the bed covers are the most species-rich class.

With 226,000 known species, the Bedecktsamer is the group of plants with the most species. While their systematic position within the seed plants and their origin are still the subject of scientific debate, their internal systematics has stabilized not least through the work of the Angiosperm Phylogeny Group (APG) since the 1990s. The system presented here is based on the fourth version of the APG presented in March 2016.

In addition to the large groups of monocotyledons and eudicotyledons, there are still some basal orders. Their relationship is illustrated by the following cladogram :

Under the term of the basal orders , several orders are summarized, which are phylogenetically at the base of the covering plants. They do not represent a natural relatives group ( Monophylum ) and are therefore no longer listed as a separate taxon as in the past (for example as a furrow pollen dicotyledonous ). The basal orders include around 8600 species. They share a number of common characteristics.

It is predominantly woody plants that produce essential oils ( phenylpropanoids and terpenes ). These are located in spherical idioblasts . The leaves are simple and have no stipules . The flowers are very diverse. The arrangement of the flower organs is screwy or often in threefold circles. The pollen is predominantly monosulcat. The carpels are usually not fused. Common plant ingredients are benzylisoquinoline alkaloids and neolignans .

The following taxa belong to the basal orders:

The mesangiosperms (English mesangiosperms) are attached to the basal orders, which contain all other bedecktsamer. They consist of the following groups:

Bedecktsamer have been known as fossils since the transition from the Upper Jurassic to the Lower Cretaceous , that is to say for 160 to 140 million years. In 2013, fossil pollen in drill cores was scientifically described, the age of which was dated to 252 to 247 million years; this means that the development of flowering plants probably began in the Middle Triassic . One of the oldest, scientifically described flowering plants is Montsechia vidalii , which was found in around 130 million year old calcareous sediments of former freshwater lakes in the Pyrenees and elsewhere in Spain .

The origins of the flowering plants, their ancestors and their closest living relatives are still controversial today. There are essentially three groups of hypotheses:

The first is the anthophyte hypothesis, which states that the outer seed integument and carpel are derived from fertile structures that were previously united in a flower-like structure. The Gnetales and Bennettitales are therefore regarded as close relatives and possible precursors . However, the similar structures that some consider to be homologous are often quite different in these two groups and in the bedridden. There are also no fossils that represent a series of transformations between these groups. In molecular genetic studies, the Bedecktsamer and the Gnetales rarely form a common clade .

The second group of hypotheses suggests that the outer ovule integument and carpel evolved from a seed fern megasporophyll. These fertile structures were only combined into a flower at a later point in time. A frequently named candidate is Caytonia . Some important structural features, however, are not known with sufficient accuracy, the structure of the Cupula of Caytonia and carrying them rachis . In a number of cladistic analyzes, Caytonia is also quite far removed from the seed plants.

According to the third group of hypotheses, the carpel and the outer ovule integument were formed by ovules on previously pollen-forming structures. They thus resemble Polecat's catastrophic sexual transmutation theory of the origin of maize . It also includes Meyen's gamoheterotopia theory, which attempts to explain the transformation of synangial microsporophylls to seed-bearing megasporophylls at the tip of Bennettitales cones. The mostly male theory of Fröhlich and Parker, which also belongs here, explains the carpel as the transformation of apical microsporophylls on indeterminate inflorescences to megasporophylls on fructifications with determined growth. For them the Corystospermales are the most likely sister group of the Bedecktsamer.

The agriculture is directly or indirectly dependent (through animal feed production), almost entirely of angiosperms; Of all the families in this department, the grasses are by far the most important. They contain the majority of all vegetable raw materials ( rice , corn , wheat , barley , rye , oats , millet and pearl millet as well as cane sugar ).

The legumes such as beans and peas follow in second place. Furthermore, nightshade plants such as potatoes , tobacco and tomatoes , cucurbits such as pumpkin and melon , cruciferous plants such as rapeseed and cabbage and umbellifers such as parsley are important.

Many of our fruits come from the rhombus (e.g. citrus fruits ) and rose families. For example strawberries , apples , pears , plums , apricots and cherries .

In some regions of the world, only certain individual species play a dominant role because of their diverse uses, for example the coconut on the Pacific atolls .

In addition to being food crops, flowering plants have other economic importance. For example in the form of wood , paper , fibers ( cotton , flax , hemp, etc.), medicines ( thimbles , camphor ) or for decoration and landscaping. They are surpassed by other plants in the area of ​​wood production.