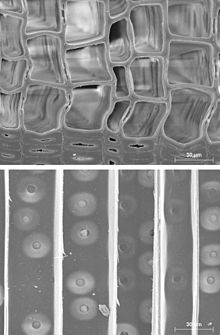 Tracheids (more clearly: trachëids ) [tʁaχe'ˀi: dən] are usually heavily lignified, axially elongated cells that are formed for water conduction and consolidation. You find yourself v. a. in the xylem of the vascular bundle of the stem axis of plants .

In contrast to the evolutively more modern vessels ( trachea ), tracheids do not have dissolved transverse walls, but instead guide the water from cell to cell via so-called courtyard pits . In the upper area they are pointed and therefore have a larger connection area to the next cell; This is where most of the pits are usually located.

Naked seeds (Gymnospermae) and vascular spore plants (Pteridophyta) usually only have tracheids for water conduction, while Bedecktsamer (Angiospermae) also predominantly have tracheas, which with a larger diameter and broken transverse walls guarantee even better water conduction. In the case of hardwoods, however, this also increases the risk of an embolism if air is admitted.

After they have reached their final size, shape and function, the tracheids die off and lignify due to the deposition of lignin in the cell wall. In contrast to the tracheas, they also have a strengthening function. Above all, the narrow, darker latewood in conifers is formed almost exclusively for consolidation purposes, which is why fine-grained softwood with a high proportion of latewood is generally more stable and valuable than coarse-grained ones.

In deciduous trees, on the other hand, the consolidation is done by libriform fibers .

Also to be mentioned are the radial ray tracheids that occur in some coniferous wood species. They flank the wood beam consisting of parenchymal cells above and below and are responsible for the water conduction in the radial direction.