In plant anatomy, pits are thin spots or recesses in the secondary wall of plant cells that facilitate the exchange of substances between neighboring cells. The entirety of the pits and their arrangement is referred to as pitting. 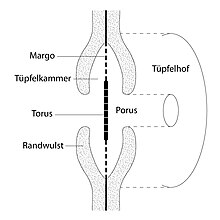 In plant cells with non-woody primary walls , an exchange of substances between the cells is possible up to a particle size of 5 nm. As a result of the lignification of cell walls that their strength improved properties, which is permeability , however, greatly reduced. In order to ensure a lateral exchange of substances into the neighboring cell, pits are created where it is necessary.

If the pressure in the cell lumen changes , it can lead to a spot closure .

A pit consists of a pit and a pit membrane (closing skin). Usually two pits are opposite each other, so that a pair of pits is created. Between the two adjacent cells there is only the potting skin, which consists of the central lamella and the thin primary wall layers. It delimits the potted cavity in the direction of the neighboring cell, while the cavity is open towards the cell lumen . Depending on the design of the pits, three types of pits can be distinguished: courtyard pits, pits with borders on one side and simple pits. 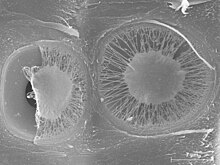 Court pits, d. That is, pits bordered on both sides, occur between dead water-conducting and strengthening cells ( tracheids , trachea ). In contrast to the simple pits, the secondary wall of the courtyard pits stands out from the middle layer ( middle lamella + primary wall ) and arches over it as an edge bulge. As a result, the spotted channel widens in a funnel-shaped manner to form a spotted chamber, the round to slit-shaped opening of which into the cell lumen is called the porus. From the lumen of view, the curvature of the bead is emerging around the porus than yard.

The pitting membrane is thickened in the middle of the pits of the Pinaceae to form a circular torus (lat. Pad). The edge of the torus is fringed. The fringes gradually merge into threads that form a net-like margin, which is permeable to liquids.

Court pits in the trachea of ​​the bedecktsamer (angiosperms) have a slit-like opening and no torus on the closing skin. In some dicots there are sculptured courtyard pits, in which the cavity of the pit is covered with wart-like formations. In the walls of the libriform fibers there are oblique-column-shaped pits, the columns of a pair of pits being twisted against each other.

Pits bordered on one side

Piceoids, pits bordered on one side in the intersection field ( Picea abies )

Limits parenchyma cells and tracheids / vessels to each other, occur on one side bordered pits. With them, the pitting cavity on the side of the parenchymal cell consists of a channel, on the opposite side it has the shape of a pitting chamber. As with the simple pits, both the central thickening (torus) and the porous character of the peripheral membrane areas (margin) are missing. The number and shape of the pits, which are bordered on one side, in the intersection fields are of great importance when determining conifers . With regard to the shape of the pori on the side of the longitudinal tracheids, a distinction is made:

Parenchyma cells are connected to one another through simple pits . The pit cavity is designed as a channel in these pits. By Tüpfelmembran pass therethrough as plasmodesmata called cytoplasmic strands that serve the mass transfer. The places where pits will later appear can be seen as thin places in the primary wall. They are densely traversed by plasmodesmata and are called the primary spot.

Unilateral pits or blind pits have no complementary pits in the neighboring cell. They lead to intercellular spaces or end at the middle class. They are probably incompletely formed pits with no further function.

The first illustrations of pits can be found in Marcello Malpighi 1675 and Antoni van Leeuwenhoek 1722. For a long time they were viewed as warts or holes in the wall and referred to as pores. Ludolph Christian Treviranus spoke of stippled or punctured vessels. Hugo von Mohl recognized in 1828 that these are not pores, but thin spots, pits.