Eduard Adolf Strasburger (born February 1, 1844 in Warsaw ; † May 18, 1912 in Bonn ) was a German botanist from Russian Poland . Its official botanical author abbreviation is “ Strasb. "

Born as the son of the merchant and owner of the royal confectionery in Warsaw Eduard Gottlieb Strasburger and his wife Anna Karoline von Schütz, he first attended high school in Warsaw. He completed his biology studies from 1862 to 1864 in Paris and then in Bonn. After the death of his academic teacher Hermann Schacht , he became an assistant in Jena in 1864 . In 1866 he received his doctorate from Jena University and two years later (1868) he received his habilitation in Warsaw from Henryk Fryderyk Hoyer .

In 1869 he accepted a position at the University of Jena , where he was initially an associate professor and from 1871 a full professor of botany. In 1880 he was appointed to the botany chair at the University of Bonn . In 1891/92 he was rector of the university. He kept his chair in Bonn until his death in 1912.

Strasburger discovered (together with Walther Flemming , 1843–1905) the division of the plant cell nucleus (1875) and provided fundamental insights through his investigations on the "construction and performance of conduction pathways", published in 1891. Together with his three colleagues Fritz Noll , Heinrich Schenck and Andreas Franz Wilhelm Schimper founded the " Strasburger ", known in specialist circles as the "Bonn textbook" or also as the "four-man book" (first edition 1894), which is still the standard botany textbook today. 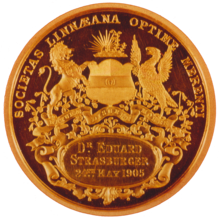 In 1905 Eduard Strasburger was awarded the Linnaeus Medal , which is awarded annually by the Linnaeus Society to an outstanding botanist or zoologist . In 1908 he was also awarded the highly renowned Darwin Wallace Medal (together with five other scientists, e.g. Ernst Haeckel ), which was only awarded every fifty years until 2008 for outstanding progress in evolutionary biology .