The Sorbonne is a building in Paris' Latin Quarter . The Sorbonne emerged from a Catholic educational institution founded around 1250 and in the Middle Ages was the seat of the college of the Sorbonne - a part of the old Paris University - and thus became a synonym for the old (until 1793) and later also for the new in common parlance Paris University (1896–1971).

The name and the central building complex in the 5th arrondissement are currently shared by three of the thirteen Paris universities that emerged from the university reform of 1970/71 : Paris I Panthéon-Sorbonne , Paris III Sorbonne Nouvelle and Paris IV Paris-Sorbonne . The Sorbonne building also houses parts of the University of Paris V Descartes and the École pratique des hautes études , the École nationale des chartes and the joint rectorate ( Chancellerie ). 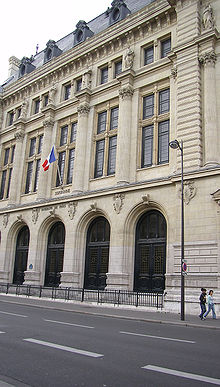 The Sorbonne is located on the Rive Gauche , the left bank of the Seine, on the slopes of the Montagne Sainte-Geneviève hill in the 5th arrondissement . It forms the center of the student quarter Quartier Latin . The main entrance is on Rue Victor Cousin , side entrances are on Rue Cujas and Rue Saint-Jacques . The entrance to the Rector's Office is on Rue des Écoles .

The foundation of the Sorbonne as a college of the University of Paris is on Robert de Sorbon (1201-1274), the chaplain King Louis the Saint , returned, a university however, there were already about 1200. The confirmation bull by Pope Clement IV. In 1268 sealed. Originally an alumnate for poor theology students , the Sorbonne (a name that the institution only took on in the 14th century) developed an ever greater reputation through famous teachers who worked on it, as well as through its comparatively rich foundation assets. At the beginning of the 14th century, the Sorbonne supported King Philip IV in the legal proceedings against the Knights Templar .

In the Sorbonne the meetings of the theological faculty of the Paris University took place regularly , so that at the latest by the end of the 15th century it became customary to refer to this faculty itself as the Sorbonne . Many of the decisions that were decisive for the formation of Catholicism, not only in France , from the Middle Ages to modern times are linked to this name .

By 1500 at the latest, however, the Sorbonne developed the tendency to shut itself off from new developments, such as the humanism radiating from Italy at that time . Later she tried in vain to prevent the growth of the Pope's power and the introduction of the Jesuit order in France (1562) and made herself a champion of Gallicanism , a kind of French national church. Her bitter struggle against Jansenism also marginalized her further and cost her a lot of sympathy, especially among aristocratic and upper-class civil servants. It completely lost its authority when it embarked on the fight against the Enlightenment in the 18th century and increasingly came under the reputation of intolerance and obscurantism.

From the 13th to the 15th centuries, the university's meetings were held in the church of Saint-Julien-le-Pauvre , where the rectors were also elected.

In the Middle Ages, students in the Parisian population were considered turbulent subjects who populated the taverns and brothels. In 1229, a student drinking binge caused the first university strike in European history - with far-reaching consequences. During the Carnival season, some students broke into a fight in a public house. The mayor's soldiers, who had long been waiting to beat the students' arrogance, stormed the Latin Quarter and started the hunt. Two recognized masters also fell victim to their anger. The teachers of the Sorbonne saw this as an attack on the university as a whole and called a lecture strike. Because the city refused to pay the victims adequate compensation, the university remained closed. Many lecturers emigrated to other French cities or to England, where they settled at Oxford University . The lecture strike lasted three years; until Pope Gregory IX. , himself a former Paris student, published the bull Parens scientiarum on April 13, 1231 , in which he endowed the university as the mother of science with various privileges in order to prevent the students from being bullied. The Sorbonne only resumed its work in 1232, when the young King Louis IX. guaranteed her far-reaching privileges and independence.

At the beginning of the French Revolution , its extensive, magnificent buildings (which were rebuilt from 1635 to 1653 under Cardinal Richelieu and Cardinal Mazarin ) were confiscated as national property. In 1808 they were transferred to the centrally restructured Napoleonic educational body, the "université impériale" (a state organization that controls all educational institutions in France and has nothing in common with universities in today's sense). Only during the Third Republic under Félix Faure was the nouvelle Université de Paris re-established in 1896 ; The current university buildings were also built in these years.

In May 1968 , the temporarily occupied university was the focus of the student movement. The student revolution at the time ensured that the Sorbonne changed more than ever before. It was divided into 12 different and independent universities. The Sorbonne no longer exists in the form previously described, only its 19th century building now houses three capital city universities: Paris I, Paris III and Paris IV.