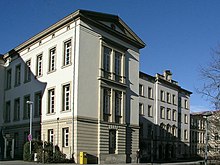 The Theologicum, seat of the Evangelical and Catholic Theological Faculties of the Eberhard Karls University of Tübingen

A theological faculty (also: department of theology ) is a university institution that is responsible for research and teaching in the field of theology as well as the academic training of priests , pastors and religious teachers. There are currently around 50 theological faculties at state universities in the German-speaking area.

Their structure corresponds to that of other faculties ; its management is also in the hands of a dean . There are around 30 Protestant and Roman Catholic faculties each in Germany , plus a few in Switzerland and Austria . Several universities have both Catholic and Protestant theological faculties - Bochum , Bonn , Mainz , Munich , Münster , Tübingen , Vienna and Wuppertal - most of which maintain close cooperation.

A theological faculty is responsible for research and teaching in the field of disciplines belonging to theology . In addition to teaching the biblical languages Hebrew , Greek and Latin , this includes at least the following five classical subjects:

In addition, other subjects are often offered: philosophy , pedagogy and psychology , mostly in cooperation with other departments.

The graduates of theological studies prepare usually on an occupation in the church service before ( pastor , pastoral assistant , management of projects , Caritas , Diakonie , etc.); some work for the media or socially committed institutions or embark on an academic career. Because of religious instruction, there is also a need for theologians in the state school service. The graduates must generally belong to the respective denomination .

In addition to the university theological faculties, there are also theological colleges , which are often associated with universities or are universities with their own doctorate and habilitation rights . Examples of this are the Wuppertal / Bethel Church University , the Augustana University in Neuendettelsau and the Trier Theological Faculty .

The theological faculties are of particular interest in terms of church law . On the one hand, they have been an integral part of state universities from time immemorial and represent a form of state cultural maintenance that is not inadmissible because it benefits a religious community . Above all, however, the state is constitutionally obliged to give religious instruction in its schools. Consequently, he must also ensure that suitable teachers are trained. On the other hand, unlike religious studies , theology not only judges religious phenomena, so to speak, “from the outside”, but also identifies with the beliefs taught. Belonging to the respective religious community is a qualification requirement for university teachers (denominational state office). In this respect, because of the separation of state and church , the state is prohibited from bindingly stipulating the teaching content itself. Because of this ideological neutrality of the state, he is dependent on cooperation with a religious community. It was unconstitutional, for example, that the University of Frankfurt wanted to establish a Catholic theological faculty against the will of the Roman Catholic Church: the state is forbidden to identify with individual religious teachings or even to disseminate them “on their own”.

From this it becomes clear that the theological faculties are neither just state affairs nor only “own affairs” in the sense of the church's right to self-determination . Rather, it is an example of the "common affairs" ( res mixtae ) of the state and the respective religious community, as permitted by the Basic Law for religious instruction, institutional pastoral care and the state collection of church taxes . The details are often designed by state church treaties. The respective religious communities are responsible for the teaching content and the examinations, while the state universities are responsible for the academic staff, the premises, the organization, etc.

The Catholic Concordats provide for the granting of the nihil obstat of the competent church authorities for the appointment of university teachers . For historical reasons, the older Protestant church treaties only speak of a right to an expert opinion. In view of the ideological neutrality of the state, this report is also binding, namely, the state is also prohibited from teaching Protestant theology on its own responsibility for the content.

The Catholic Concordats with the Reich or federal states always provided for a subsequent right of objection by the church if the teaching or lifestyle of a university professor no longer complies with Catholic principles to a serious extent.

In the event of a subsequent complaint, the constitutional positions of the university professor and the offending church conflict. The former acts in exercise of his fundamental right to freedom of science . On the other hand, there is the church's right to self-determination and the religious and ideological neutrality of the state, which make the content- related orientation of teaching the responsibility of the church. Education and teaching in the theological faculty must therefore conform to the principles of the church. This collision of different constitutional interests must be resolved by means of practical concordance . The result is the retention of civil servant and academic rights of the university professor - i. In other words, he remains professor and university professor to the same extent as before - and ensuring the denomination of the faculty by relocating the objected to from the theological faculty and teaching. Famous cases of complaint concerned the work of the Catholic theologians Horst Herrmann (1975), Hans Küng (1980) and Uta Ranke-Heinemann (1987).

The Protestant church treaties only stipulate that the church should be involved in the appointment of university teachers. A subsequent right to complain is not expressly stated in the text of the contract for Protestant theological university professors (see for example § 11 Prussian Church Treaty of May 11, 1931, but also Art. 3 Wittenberg Treaty of September 15, 1993). At the same time, a right of objection comparable to the Catholic regulation is assumed for the Protestant churches as a consequence of the church's right to self-determination. Subsequent complaints are made, as in the case of the Protestant theologian Gerd Lüdemann , in an analogous application of the Catholic right to complain. Lüdemann kept z. B. his chair with the same salary, but this was rededicated in "History and Literature of Early Christianity" and removed from the Protestant theology course (pastoral office and teaching).

The existence of theological faculties is seen as an anachronism, especially by secular humanistic organizations and advocates of strict secularism . It is criticized that the state finances tasks that are actually incumbent on the churches themselves; In addition, it is claimed that theology itself is not a science because of its religious affiliation - in contrast to, for example, religious studies - and therefore does not belong to a university.

The university theology itself, on the other hand, sees itself as a scientific examination of the sources of faith and ethics , or as practical theology in the border area to the humanities and social sciences .