Secularism , also secularism , (from ancient Greek λαϊκός laïkós , German 'the unsanctified, layman ' , in contrast to the priest) is a model of religious constitutional law based on the principle of strict separation between religion and state . The term laïcité was created in 1871 by the French educator and later Nobel Peace Prize laureate Ferdinand Buissonwho campaigned for religion-free school lessons. In some states, secularism is enshrined in the constitution. Many other, mostly western states are not explicitly secular according to their constitution, but they practice the separation of state and religion (s) to different extents.

The term “secularism” originated in France in the 19th century for an anti-clerical stance that opposed any ecclesiastical influence on the interests of the French state, but not against Christianity itself. The Dreyfus Affair began in France in 1894 . Domestic political upheaval, a latent anti-Semitism and influence attempts clerical - restorative circles led to years of social polarization in the country. In terms of foreign policy, diplomatic relations between France and the Vatican were broken off in 1904 . They were not resumed until 1921. Domestically, the law separating church and state came into forcefrom 1905 in force, for the adoption of which the then MP and later Prime Minister Aristide Briand had advocated . This was the first time that the principle created by Buisson was actually applied. The term laïcité was first used in the 1946 constitution . Article 1 reads: La France est une République indivisible, laïque, démocratique et sociale.

The term secularism, which is frequently used in Germany, is not to be equated with that of secularism, since it has a different etymological connotation , even if this is often not taken into account in common language usage. While secularism ("laïcisme") arose at least originally as a battle term against an anti-religious ideology, secularism includes the separation of religion and state as well as the requirement of equality and respect for all religions and the ideological neutrality of the state. In contrast to the French expression of secularism, according to which primarily the state before the harmful influence of the Catholic ChurchShould be protected, the separation of church and state - as in the USA  - can also primarily serve to protect the churches from state influence and go hand in hand with a strong social influence of the churches.

States that are secular according to their constitution

The term “secularism” is anchored in the constitution of the following states:

However, these states show marked differences in the form and implementation of secularism.

The Czech Republic , France and Portugal are the only ones constitutionally entitled to secular states of the European Union . On December 9, 1905, the law separating church and state was passed in France . In France it implemented the principle still valid today of the complete separation of religion and state. The law applied above all to the Catholic Church; for reasons of neutrality, the other denominations were included in this regulation. However, in Portugal as well as in both Alsatian departments and the Moselle department in France, secularism is implemented through concordats agreed rights of the Roman Catholic Church incomplete.

In Turkey, secularism is interpreted as the “subordination of the practice of religion to the state”. The state trains the Islamic imams and, through the Office for Religious Affairs, sets strict guidelines for their work.

Many western states are not explicitly secular according to their constitution, but practice to different degrees the separation of state and religion (s) and thus the neutrality of the state in religious and ideological matters. In this sense, most of the states in Africa, America, Oceania and Europe are considered secular .

The Catholicism accepted since the Second Vatican Council, a relative secularity of the State and the mundane subject matters (see. Gaudium et Spes , 1965), but sticks to his spiritual absoluteness firmly. The Protestant or Orthodox state churches are actually unable to recognize secularism; it succeeds only in the theological detour via the traditional "obedience of the Christian" to any authority ( Rom 13.1  EU ), including the secular-democratic one. The Protestant Free Churcheshave always rejected the state church, that is, from a religious perspective approved freedom of religion , and therefore also welcome the more recent self-correction of the Catholic position. 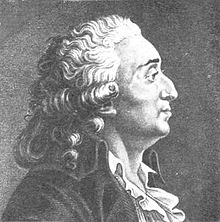 The Marquis de Condorcet (1743–1794), champion of secularism in France

The effects of the French political struggle of 1905 can still be felt today in the interpretation of the term in everyday life. A distinction must be made between two interpretations: a liberal one, which understands by secularism the institutional separation of state and church, and a radical ( laïcard ), for which secularism means the prohibition of any religious activity outside a narrow, private area. While the liberal understanding of laicism is now also accepted by the Christian churches, there are numerous representatives of the harsh interpretation in the ranks of the political elite, traditionally especially the political left up to the Parti communiste français . the Catholicismhas not recognized ideological secularism to this day, since the papacy clings to the priority of its spiritual authority over the state and social order. However, since the Second Vatican Council , the Roman Catholic Church has deliberately renounced special political rights and privileges in the state and no longer represents the concept of a state religion , which was last abolished in Italy (1984).

In today's French understanding, laicism has become a political ideal that aims at the principles of neutrality of the state towards religions, their equal treatment and freedom of belief . Secularism is a constitutional principle. Religion is exclusively a private matter, from which it follows that religion not only has no state but also no public function. The entire church property had already been nationalized during the French Revolution , but with the Concordat of 1801 the religious communities were granted compensation through state salaries for the clergy. With the law separating church and statefrom 1905 all state funding of religious communities was discontinued without replacement. Churches or synagogues built before 1905 are still owned by the state, although those parts that “serve the cult” can be left to the individual religious communities for use. France recognizes “church organizations” for their existence, but they do not receive any state subsidies; however, there are tax benefits. This does not apply to Alsace and the Moselle departmentwhich did not belong to France at the time of the law of 1905 and whose inhabitants resisted the adoption of the French regulation after their return in 1919, so that the regulations of the Concordat of 1801 still apply here today. In the overseas department of French Guiana , too , the staff of the Catholic Church are paid by the state. The institutional pastoral care ( aumôneries ) is also excluded from the prohibition of state promotion of religion, whereby reference is made to the realization of religious freedom (Art. 1 (2) of the Separation Act of 1905). This also includes military chaplaincywhich was initially limited to Catholic, Protestant and Jewish military chaplains. In 2005 it was supplemented by an Islamic military chaplaincy.

Laicism is strictly practiced in France. The state sees it as a task to protect its citizens against religious practices that run counter to public order or the rights of the individual. In French public schools it is forbidden to ask teachers or students about their religion. However, there is also a firmly anchored, diversified private school system, in particular the enseignement catholique . Pastors cannot work for public companies at the same time. France regards the religious views of the citizens as a purely private matter; there are no official statistics on the religious affiliation of the population. One of the consequences of this is that the current political debate in France has led to segregationor discrimination in the labor market are not reliable figures. Since 2004 it has also been forbidden to wear conspicuous religious symbols in schools, such as veils, kippahs, crosses, turbans (for Sikhs) or traditional costumes. However, the state broadcasters France 2 (TV) and France Culture (radio) broadcast Sunday services and devotions.

The former French President Nicolas Sarkozy has proposed in various speeches and in his book The State and Religions a redefinition of French secularity, which he calls open or positive secularity. This is intended to make religions more public responsibility, also to prevent fundamentalism . In the discussion of the repositioning, which was also underlined by personal behavior, Sarkozy was heavily criticized by secular associations.

Several other states took the French model as a model, in particular Turkey under state founder Mustafa Kemal Ataturk . With the far-reaching changes in Ataturk's time, secularism became a state objective. Laicism as part of Kemalism is anchored in the Turkish constitution to this day (2018) . Initially, the new state had a massive anti-religious effect - pilgrimages to Mecca were banned and religious studies were not possible from 1933 to 1948. In fact, the state has seized the ( Sunni- Islamic) religion and tried to use the state religious authority Diyanetto domesticate. Over time, the concept of secularism in Turkey has hardened. In Ataturk's time it was still common to wear a headscarf. Later, secularism was interpreted in such a way that such making of religion visible on the state level is not welcome. It was frowned upon as a politician to profess one's religion in public.

In February 2008, on the initiative of the ruling AKP, parliament had implemented a constitutional amendment to allow the headscarf to be released for female students. The change was reversed four months later by the Constitutional Court . This meant that women who wear headscarves were initially still excluded from university studies. In autumn 2010, Turkey's highest university council finally lifted the headscarf ban at universities. Religious minorities in Turkey must continue to face repression today. On March 14, 2008, the Attorney General Abdurrahman Yalçınkayarequested a ban against the AKP. The reason given was that the AKP was a “center of anti-secular activities”. The case was dealt with by the Constitutional Court of Turkey . The attorney general called for a political ban on 71 people, including the then Turkish President Abdullah Gül , the current Turkish President and Chairman of the AKP Recep Tayyip Erdoğan and the former Parliament President Bülent Arınç . In the court, six of the eleven judges voted in favor of closing the AKP, but the required number of seven judges was barely reached. State funding for the AKP was canceled. The opposition CHP advocates consistent secularism in its program.