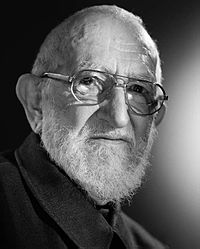 Abbé Pierre , priest and until his death in 2007 the most famous person in the country

In France in 2012 around 40,000,000 people professed the Catholic Church. Due to the very different survey results, the proportion of the population can only be roughly estimated between 54% and 66%.

Church provinces and dioceses in France
→ Main articles : List of French dioceses  and list of Roman Catholic bishops in France

The Roman Catholic Church is under canonical law 23 archbishoprics and 74 dioceses according to the Latin rite on French territory . The central organ of the French bishops is the French Bishops' Conference ('Conférence des évêques de France'). The Gallican ordinariate and the territorial prelature are special features . The Greek Catholic Christians of Armenian and Ukrainian origin who live in France and are united with the Roman Catholic Church are cared for pastorally in an Armenian eparchy and a Ukrainian apostolic exarchate .

Beginnings of Christianity in France

Legend has it that Lazarus of Bethany was the first Christian bishop of Marseille in the first century . In fact, the relics attributed to Saint Lazarus (originally from Cyprus) were not brought to Marseille by crusaders until 1204. In 1146 the relics were transferred to Autun Cathedral , where they are still kept today. The church father Irenaeus of Lyon reports on the persecution of Christians and the martyrdom of his predecessor Pothinus in the year 177 in the then Gallo-Roman Lugdunum (now Lyon ). Despite occasional persecution, Christianity was able to spread further and further in the Roman province of Gaul , until in 313 under Emperor Constantine the Great with the so-called Milan Agreement, it received permanent state toleration. Under Theodosius I († 395) Christianity was in fact elevated to the status of the state religion of the Roman Empire . Missionaries and bishops such as Saint Martin of Tours , who is now regarded as the patron saint of France, played a major role in the expansion . After the fall of the Western Roman Empire , the territory of what is now France was taken over by the Germanic peoples of the Franks (in the northeast), the Visigoths (in the southwest) and the Burgundians (in the southeast). The Franks were the only one of the larger Germanic peoples of the Migration Period to adopt the Catholic faith (baptism of the Merovingian king Clovis I around 500 AD), while the other Germanic peoples converted to the Arian faith . This way, Clovis secured the support of the dominant Christian church. The close connection between the now Roman Catholic (ie with dominance of the Bishop of Rome) church with the coronation of the Frankish King Charles as Roman Emperor in 800 AD was sealed.

The following important information is missing from this article or section:
entire church history of France from the High Middle Ages to the French Revolution
Help Wikipedia by researching and pasting it .

During the Reformation, only one new religious group was actually founded in France. These were the Huguenots , who, however, spread particularly quickly in southeast and southwest France. Large strongholds were, for example, Gascony , Béarn and the Kingdom of Navarre . The Huguenots were a special form of the Calvinists, whose teachings came to France during the late reign of Francis I. But even before that there were many scholars who had Reformation-like lines of thought, e.g. B. Guillaume Budé . The Crown initially used force against the Huguenots. The persecutions culminated in the reign of Charles IX. with Bartholomäusnacht , driven by the king's mother, Katharina de Medici , who, as a strict Catholic, wanted to exterminate the Huguenots. During this time the Catholic Church received great criticism (from Protestant countries). After bitter fighting with the Protestant opposition, Charles's successor, Heinrich III , proposed . a rather moderate course and even allied with the Protestant king of Navarre, Henry. The Catholic Church reacted indignantly to this. Consequences for Henry III. were protest by the Pope, the formation of a powerful Catholic opposition, the Holy League (under the leadership of Henri de Lorraine, Duke of Guise ) and his assassination by a Dominican . It was only Henry IV, the former king of Navarre, who, after long struggles and his conversion to Catholicism, reconciled the majority of France. Even so, there was a group of Catholics, the Dévots , who acted against Henry IV (like the Duke of Biron). François Ravaillac , who is included in this group, finally murdered him.

On July 15, 1801, Pope Pius VII and Napoleon Bonaparte concluded a concordat that redefined the relationship between the Catholic Church in France and the French state and remained in force until 1905. In the years to come, numerous dioceses were rebuilt and rebuilt.

In the course of the 19th century numerous religious orders for nursing, schools and missions were founded . Many rural people, where popular piety was strong, entered the order. Among other things, there was strong population growth due to a sharp drop in child mortality . The number of religious, mainly active in the missions of the French colonies, was large.

In the second half of the century, the pilgrimage site of Lourdes , where St. Bernadette Soubirous , had several Marian apparitions in 1858. Within a few years Lourdes became the most important place of pilgrimage in Europe.

In many Catholic regional churches in Europe there was pronounced anti-modernism from around 1870 to 1910 . Anti-modernism turned - based on the decrees of Pius IX. (Pope from 1846 to 1878) - against social and political reforms to enforce human rights and democracy . A high point of anti-modernist tendencies in the Catholic Church in 1910 was the obligation of all priests to take the so-called anti-modernism oath : from September 1, 1910, they were expressly obliged to reject the errors mentioned in the syllabus errorum (list of errors). There was also a certain amount of ultramontanism in France .

After the collapse of the second empire (which lasted from 1852 to 1870), there were repeated political disputes because large parts of the population were skeptical of a republic. They were often referred to as royalists and promoted by many bishops. Growing anti-clericalism and the Dreyfus affair led the political left to victory in the parliamentary elections in 1902. In July 1902 all private schools not approved by the state were closed, affecting around 3,000 Catholic schools. The salaries of the bishops were also suspended. In March and July 1902 all religious orders were abolished and on July 7th 1904 a ban on the establishment of new ones was issued. December 9, 1905 then brought the law separating church and state (see also laicism ), which led to the unilateral termination of the Concordat by the French state. All religious symbols have now been removed from public buildings and religious instruction in schools has been abolished. All church buildings came into the possession of the state, which has been responsible for their maintenance ever since. State pay for the clergy ended.

There is no church tax in France . Due to the strict separation of church and state (laicism), the church is financed from the voluntary contributions of its members. For church tithe ( denier d'Eglise ) to which the dioceses call annually, but contributes only a minority of Catholics. For example, in 2012 around 1.25 million people donated a contribution to church tithe.

In 2012, the Catholic Church in France received 613.4 million euros. Income was based on five sources of income: In 2012, the church tenth averaged 40% of the church's income, which it uses to pay its priests and other staff and to cover other costs. Collections in the trade fairs contributed 25%, pride fees 13%, trade fair grants 8% and bequests 14%.

The Catholic Church in the departments of Bas-Rhin , Haut-Rhin and Moselle , ie in the areas that belonged to the German Empire as the Reichsland Alsace-Lorraine from 1871 to 1918 , enjoys certain privileges. This is because these territories were not affected by the separation of church and state . Even after the re-annexation to France, the law was not transferred to these areas, but left with the law that was valid before 1871, which was based on the Napoleonic Concordat of 1801. Therefore, Catholic priests, Protestant pastors and rabbis are paid by the state in this area, and Catholic and Protestant religious education is given in public schools.

Static information about the Catholic Church in France:

The Holy See and France have full diplomatic relations. The representative of the Holy See is the Apostolic Nuncio in France . Since January 2020 this has been Archbishop Celestino Migliore .