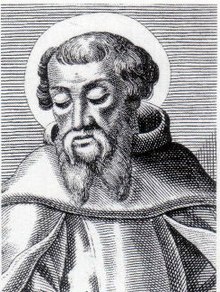 Irenaeus of Lyon ( ancient Greek Εἰρηναῖος ὁ Σμυρναῖος Eirenaios ho Smyrnaios 'Irenaeus from Smyrna / the Smyrner'; * around 135; † around 200), a church father , was the second traditional bishop in Lugdunum in Gaul (today Lyon / France ). He is considered one of the most important theologians of the 2nd century and one of the first systematic theologians of Christianity. His writings were groundbreaking in the early development of Christian theology, especially his five books "against the heresies" (adversus haereses) . He coined the term Regula fidei , the "rule of faith".

He is venerated as a saint . In Protestant, Anglican and Roman Catholic churches it is commemorated on June 28 , in Orthodox churches and the Armenian Church on August 23 .

Little is known about the life of Irenaeus. According to a statement in Euseb's Historia Ecclesiastica , he probably came from Smyrna in Asia Minor , today's İzmir ( Turkey ) and the hometown of Polycarp of Smyrna . He is considered to be his pupil, even if he never explicitly referred to himself as such. He claims to have seen or heard of Polycarp in his early youth, when he was already a very old man . Irenaeus mentions that Polycarp "was not only instructed by the apostles and spoke to many who had seen Christ, but was also appointed as bishop of the Church of Smyrna by the apostles in Asia ."

According to tradition, Irenaeus was the second bishop of Lyon. The first bishop, Pothinus , suffered 177 during the persecution of Christians under Marcus Aurelius , the martyrdom . At this time Irenaeus was in Rome, where he fought against Gnostic Christian doctrines and, with regard to Montanism , urged the militant Roman bishop Eleutherus to make peace. In the Easter dispute between Victor I of Rome (approx. 188–199) and the Quartodecimans , Irenaeus appeared again as a mediator.

Irenaeus probably died around 200 AD. According to another tradition, he is said to have ordained the two brothers Ferreolus and Ferrutius as priests and sent them on missions to the Besançon area; there both suffered martyrdom around the year 215 .

Irenaeus wrote numerous books, only a few of which have survived. The most important is the five-volume exposure and refutation of the so-called knowledge ( Latin Adversus haereses , "Against the heresies"), published around 180 AD. Fragments in the Greek original language have been preserved, as well as a completely preserved, but fairly free, Latin translation that was made shortly after the Greek publication. Books IV and V have also come down to us in a literal Armenian translation.

The purpose of Adversus haereses is to distinguish between Gnostic and other teachings and teachers. They are intended to be shown to be misleading. The work has been labeled a gold mine for the history of 2nd century gnosis; Even after the discovery of the Nag Hammadi library in 1945, it remained one of the most important sources of knowledge about Gnosticism.

Irenaeus of Lyon exerted a great influence on the entire West because of his intellect and creativity.

He is the author of the often quoted sentence

"The glory of God is the living man, the life of man is the vision of God."

Irenaeus is venerated as a martyr . His martyrdom is only attested in Gregory of Tours . Irenaeus was buried under the Saint-Jean cathedral (church in honor of John the Baptist ) in Lyon, which was later renamed Saint-Irenée in his honor . His grave and relics were destroyed by Huguenots in 1562 .

The center of the theology of Irenaeus, who is considered the founder of Christian dogmatics , is the unity of God , in contrast to the division of the Gnostic God into a number of divine "eons" and the Gnostic distinction between a transcendent "highest God" and a lower " demiurge " who made the world. Irenaeus uses the logo theology borrowed from Justin Martyr , but prefers to speak of the Son and the Spirit as the two “hands of God”. For him, Christ is the one who made the invisible Father visible to us.

Everything that happens is therefore planned by God to help humanity overcome immaturity and grow up. This world has been designed by God as a problem area where people are forced to make moral decisions between good and bad - only in this way can they mature (see: free will ). Irenaeus compares death to the whale , which, according to the Bible, swallowed Jonah : it only found itself in the depths of the whale's belly so that it could turn to God and do His will. Death and suffering are evidently evil , but without this the way to the knowledge of God is not passable.

The highest point in salvation history is Christ . Irenaeus establishes Christ's role as Savior . He sees Christ as the new Adam who undone what thwarted Adam: where Adam disobeyed because of the fruit of a tree, Christ was obedient even to death on the wood of a tree. Irenaeus is the first to draw the comparison between Eve and Mary , which is immensely popular among later Christians, and contrasts the former's neglect of duty with the latter's sense of duty: “Eve necessarily had to be restored to Mary so that a virgin, by becoming the advocate of a virgin, would be through hers virginal obedience undo virginal disobedience. "(To prove the apostolic proclamation [Epideixis], 33)

Furthermore, Irenaeus sees in Christ the recapitulation of human life. That is, Christ goes through the stage of human life and sanctifies it through his life with his divinity.

According to Irenaeus, salvation comes essentially through the incarnation of the Son of God as a human. He regards death and impermanence as punishment for sins . But God is immortal and imperishable; united to human nature in Christ, he transmits these qualities to us. The views of Irenaeus have particularly shaped the theology of the Orthodox Church to this day, while in the West (among Catholics and Protestants) the views of Augustine should prove to be the more powerful.

Irenaeus quotes from most of the books that are contained in the canon of the New Testament , and also includes 1st Clement and the Shepherd of Hermas . His scriptures do not quote Philemon , 2 Peter , 3 John, and Jude . Irenaeus was the first Christian author to highlight all four canonical gospels that are still valid today as divinely inspired, perhaps in response to Marcion's edited version of Luke's gospel , which he propagated as the only valid gospel.