The term monotheism ( Greek μόνος mónos "alone" and θεός theós "God") denotes religions or philosophical teachings that know and recognize an all-embracing God . In religious studies these are distinguished from polytheism , which knows and worships many gods. The term henotheism describes religions that know many gods, but which give priority to one of them (as the only god to be worshiped) . 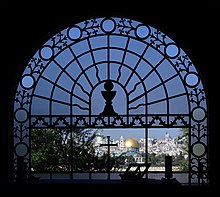 Contemporary monotheistic religions are Judaism , Christianity , Islam , Sikhism , Baha'itum , Yezidism and Zoroastrianism . Zoroastrianism as a dualistic religion and the beginnings of the Jewish faith as a henotheistic religion are partly considered in historical consideration . According to most Egyptologists, there are verifiable historical pre-forms of monotheism in the 14th century BC. In ancient Egypt under the reign of Pharaoh Akhenaten (Amenhotep IV). He raised Aton to be the only god. However, since he did not deny the existence of the traditional deities and had their cult only partially prohibited, other Egyptologists rate these early forms as temporary henotheism , which, however, represented a temporary break in polytheism. Jan Assmann describes this incision as “ implied monotheism”, but it does not yet meet the full definition of later monotheism. Another monotheistic religious community are the Mandaeans .

Monotheism is a form of theism .

Concept and theories for the genesis of monotheism

The use of the term "monotheism" was first demonstrated by the English theologian and philosopher Henry More . It can also be found with Herbert von Cherbury . There it stands in the context of an early Enlightenment model of natural religion , which is based on a primeval monotheimus; polytheism developed later.

In the 1920s, Paul Radin criticized the evolutionist view, which has been widespread since the 19th century and promoted by colonialism and Darwinism , according to which monotheism emerges from polytheism and this with its belief in personalized deities from animism , i.e. the belief in the omnipotence of the Nature. According to Radin, no one can doubt that monotheism, or at least monolatry, was also widespread in original tribal societies. Monotheism, however, requires permanent devotion and, in contrast to "intermittent" cults with their situation-specific rituals, presupposes a more contemplative-philosophical temperament of the people. As an example, he cites the mother goddess Gauteovan of the Kagaba in Colombia, who is not addressed directly in prayer and not worshiped by cults. However, the objection arises that in many tribes the influence of missionaries has brought about a state of permanent devotion.

The ethnologist Wilhelm Schmidt , on the other hand, spoke of an "original monotheism" that was widespread worldwide and tried to underpin this idea in his twelve-volume work The Origin of the Idea of ​​God or in the Origin and Development of Religion (1930). This thesis is hardly tenable empirically. Not all religions contain belief in a supreme being. In many African religions, in which such a role plays a role today, not only does the lack of a cult indicate the influence of Christian missionaries, but a comparison of historical testimonies can also prove this in detail. An example of a monotheistic African religion (paired with ancestor cult ) can be found among the Kikuyu in Kenya .

Bernhard Lang assumes that the exclusive worship of a god ( monolatry ) can be a temporary phenomenon in a polytheistic society, triggered by crises that threaten the existence of a person. The Babylonian epic Atramchasis explains the exclusive veneration of the rain god Adad through the drought decided by the gods. In Ri 10.16 is described that living in Israel stems only in war YHWH worship as a god of war, but returned after the war to the worship of the local gods. During the political crisis of increasing Assyrian pressure in the 8th and 7th centuries BC The monotheism of the Hebrews developed from this.