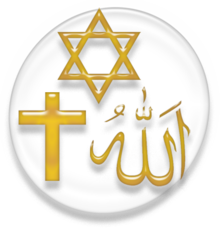 Abrahamic , Abrahamic or Abraham religions is in some Islamic Studies studies and interreligious dialogue , the name given to those monotheistic religions , referring to Abraham , the patriarch of the Israelites after the Torah ( Gen 12.1-3  EU ), or on the Ibrahim of the Qur'an and relate to his God.

The term serves as a “theological bracket” in the discussions between the religious communities. It wants to express the common origin and togetherness of Jews, Christians and Muslims. Abraham is a father figure for the three great world religions and an important starting point, albeit each in its own way:

The term appeared in Islamic studies around 1950. In the 1960s it was used in comparative religious studies by Christian Islamic scholars. It spread further in the last quarter of the 20th century and also became common in public discourse. It is criticized from various quarters as a construct, a deception or a form of syncretism .

Abrahamic religions are monotheistic, recognizing only one God . It is a personal God who is thought of as beyond the world; see. also transcendence . He created the cosmos and can intervene in world events. He is seen as omniscient , omnipotent, and omnipresent . He has qualities that are commonly considered positive in human society , but in absolute form: infallible justice , all-embracing love and goodness .

It is traditionally addressed with styling for the male sex, such as with Mr .

Images of God are mostly forbidden ( ban on images ) because there is a risk that people will worship things that they have created themselves ( idolatry ). From this it follows that he projects his properties or even just some of them into the image of God and must then submit to this idol in order to regain his projected properties. So he is restricted in his freedom and can no longer live without the idol. According to Erich Fromm, monotheism is characterized by the fact that people do not worship their own work, but an invisible God.

People can connect with God in prayer .

In the Abrahamic religions, man consists of a physical body (the body ) and a spiritual soul (the spirit ). In Christianity, a distinction is sometimes made again between soul and spirit. The soul includes the will, the mind and the feelings.

The idea of ​​an immortal human soul comes from the Greek view of the world and did not find its way into the Jewish and Christian religions until the High Middle Ages . The question of how the one, good God was able to allow evil , sin and hell in his creation is mostly answered with human free will .

The individual has only one life that has a beginning and an end (no reincarnation ). This corresponds to a linear time concept. This teleological understanding of history differs from that of other religions with cyclical or static ideas .

In the classical conception, the world was created by the one and only God (cf. creatio ex nihilo and natural theology ); it ends on the day of judgment .

God revealed himself through mostly male prophets . That is why there are holy scriptures that are (or at least contain) the word of God and therefore have great importance.

As the youngest independent religion that refers to the Abrahamic covenant, the Baha'itum is mentioned in the comparative religious studies , but so far it has only been listed as an Abrahamic religion. The Baha'i regard Abraham as a "messenger of God", as "chosen by God", as the progenitor of later founders of religions and as a "role model in the right faith". In Bahaitum, the writings of Bahāʾullāh are considered a revealed word. The Bible and the Koran, but also the writings of other religions (such as the Buddha's doctrinal conversations) are also venerated as holy scriptures and are recited in the Baha'i temples alongside the extensive writings of Bahāʾullāh .

In addition, Samaritanism , which is a genuinely Israelite religion, and Zoroastrianism are Abrahamic religions. The Druze , the Mandaeans and the Rastafari also refer to the Abrahamic tradition.

Criticism of the term

In 2006, the French philosopher Rémi Brague described terms such as “monotheism”, “ book religions ” or “Abrahamic religions” as “misleading and dangerous” (“  trompeuses et dangereuses  ”). They would be applied to the historical religions from outside: “The names are wrong if they do not do justice to the actual nature of the three religions, if one assumes that they can all be reduced to one common denominator. These terms are explosive because they promote an intellectual comfort that does not necessarily endeavor to deal with reality. "

The Judaist Edna Brocke rejects the term formed by Christians as a construct, because it pretends to have a commonality with Judaism that one could not claim, at least with regard to Christianity. For the theologian René Buchholz, Bonn, theorising of the concept of “Abrahamic” religions is fundamentally problematic: “A theology of the 'Abrahamic' religions is just another problematic model of an overarching theology of religions [...] with Abraham as a constructed figure of identification. “With this he agrees with the criticism of Harvard professor Jon Douglas Levenson of the concept or the construction of an Abraham behind the biblical texts.

The theologian Wolf Krötke , Berlin, points out that the appeal to Abraham is criticized in the New Testament, most sharply in the Gospel of John : “Only those who profess Christ are recognized as 'children of Abraham' ( Jn 8 : 37-45  EU ) “and in John 8,58 EU Christ is placed before Abraham.

Not least because of the criticism, in 2015 Henning Wrogemann called for a different approach in the context of a theology of interreligious relationships that emphasizes the importance of the physical and concrete compared to theoretical consensus fictions.