This article deals with the religious community. For the Franco-Belgian comic, see Der Samaritaner .

The Samaritans or Samaritans form a religious community that, like Judaism, emerged from the people of Israel .

There are about 800 Samaritans today. They live in the village of Kiryat Luza on Mount Garizim near Nablus in the West Bank and in the Israeli city ​​of Cholon near Tel Aviv .

Derivation of the name

The Hebrew term shamerim means keeper, observer or observant. The Shamerim (Israelite Samaritans) understood and see themselves as observers and observers of the statutes of Moses ( Torah or Pentateuch). They see themselves as the representatives of ancient Israel and represent its image of God.

The expression of the Good Samaritan goes back to a parable of Jesus in the New Testament in Luke (10.30–37 EU ). In this story, a seriously injured man who was carelessly abandoned by a Jewish priest and a Levite receives help from a Samaritan. The Samaritan tended the injured man's wounds, took him to an inn and paid for his further care. At that time, the Jews regarded the Samaritans as misguided apostates who were disregarded.

According to the biblical description, the ten tribes in northern Israel joined forces after the division of the Greater Kingdom of Israel - through the dissolution of the " personal union " that was established under David and Solomon until approx. Had existed - to the northern kingdom of Israel together with an electoral kingdom . Its capital was during the Omrid dynasty in the 9th century BC. First Shechem , later then Samaria.

Part of this population stayed with the great Assyrian deportation in 722 BC. In their homeland, because only members of the wealthy upper class of the Israelite population were deported. In the course of time, the remaining inhabitants mingled with the ethnic mix from the east ( Babel , Awa , Hamta , Sefarwajim and Kuta ) ( 2 Kings 17.24  EU ) that had been settled there by the Assyrian great power . This mixed population is known as the Samaritans. After the city or the river Kuta, the Samaritans are referred to as "Kuteans" by Flavius ​​Josephus and in rabbinical literature. Compared to rabbinical Judaism, they maintain an ancient version of the religion with its own sanctuary, its own liturgy and its Samaritan pentateuch . They regard only this as holy scripture; they reject oral Jewish teaching . The self-designation is "Schamerim" (keeper). The Samaritans see themselves as descendants of the (northern) Israelite tribes Ephraim and Manasseh .

Sanctuary and temple on Mount Gerizim

The upper class of the southern empire (consisting of Judah and Benjamin ) was 586 BC. Was deported to Mesopotamia by the Babylonians. After the Persians had ruled Babylonia, the Jews were allowed to return to Judea in various waves . Under Zerubbabel , a Davidid, they rebuilt the Jerusalem temple (around 520 BC). The Samaritans wanted to help. Your request was rejected ( Esra 4,3  EU ). They were not considered purely Israelite. They came into contact with the five settled peoples and their gods.

Religious reform through Ezra and Nehemiah

Around 440 BC Chr. Led Ezra and Nehemiah by a religious reform in Jerusalem and Judea. Followers of the old Israelite tradition withdrew to Samaria at the time. One of the reform concerns also concerned mixed marriages ( Esra 9 EU and 10 EU ). Ezra and Nehemiah were against mixed marriages between Israelites and non-Israelites. Priests and Levites in particular should not have such mixed marriages and dissolve existing ones. Manasseh , the son of a high priestly family from Jerusalem, was married to the daughter of the Persian governor of Samaria. Because of this marriage, he was expelled from Jerusalem. He and like-minded priests joined the Israelite Samaritans. From then on he organized the priestly service at the shrine on Mount Garizim .

Play media file
Lambs as Passover sacrifices (Korban Passover) on Mount Garizim. In Judaism, however, the tradition in Jerusalem was abolished with the destruction of the Second Temple and replaced by the current rules of Passover .

Since the Samaritans no longer had a share in the temple in Jerusalem, they took the view from now on that Mount Gerizim was the right place for the worship of God and not Jerusalem. Because the people of Israel were blessed from Mount Garizim ( Dtn 27  EU and Jos 8  EU ). They therefore claimed for themselves that they represented the worship of ancient Israel. Around 450/430 BC The Samaritans built their own sanctuary on Mount Gerizim. Larger renovations took place in the 2nd century BC. This temple of the Samaritans was built around 128 BC. Destroyed by the Hasmonean John Hyrcanus I. However, since coins were still found later, the final conquest is likely around 112/111 BC. Have taken place.

Expectation of the anointed

The Samaritans also expected the anointed of God, just like the Jews (see Messiah ). However, this anointed One would come from the tribe of Joseph , not the tribe of Judah . In further contrast to the Jews, they did not expect a king, but a prophet like Moses had been one. They expected the restorer , the Taheb in Aramaic . This Taheb would teach them everything and restore the religious condition of ancient Israel. You referred to Dtn 18.18  EU .

Violence against the pilgrimage

A priestly leader appeared in AD 36. He was supposedly convinced that he was the expected taheb . With a large following he moved towards Mount Garizim. Many were armed. He wanted to show his followers on the mountain the sacred vessels that Moses had placed there. This should be understood as a sign that he is the Taheb . Pontius Pilate had this procession of manifestations stopped with brutal violence.

In late antiquity there were several unsuccessful uprisings by the Samaritans against the Eastern Roman government, especially in the years 484 and 529. During these uprisings, the leaders Justasas and Julian ben Sabar were even crowned kings, but were soon captured and killed.

In the time of the caliph ʿUmar ibn al-Chattāb († 644) the Samaritans represented an important group. Occasionally it is assumed that the Jews of Medina at the time of the Islamic founder of the religion Mohammed († 632) could have been Samaritans.

The Samaritans now live in Cholon near Tel Aviv and in Nablus in the West Bank . There are only five family associations. The separation into two roughly equal groups, one of which in Cholon was heavily influenced by Israeli society and another that maintained its Arab customs, led to certain loyalty and identity problems. For example , the group in Cholon speaks predominantly Hebrew , the group in Nablus Arabic . Since the beginning of the Intifada , Arab-speaking Samaritans have been mistaken for Palestinians by Israeli soldiers and treated very harshly, which has only intensified the division.

Samaritans at the Passover festival (around 1900)

According to their own information, the number of Samaritans in the 4th century BC was About 1.2 million.

While the Samaritans were still a quite numerous people in the Middle Ages , their number fell extremely in the course of Islamization . The Samaritans practice strict endogamy , also for their own protection . In 1918 the British counted 146 Samaritans in five related families in what was then the Mandate of Palestine, including one priestly family. The benevolent attitude of the Zionists probably saved the last Samaritans from ruin. 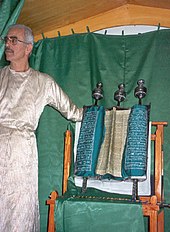 Of the scriptures in the Bible, the Samaritans only recognize the authority of the five books of Moses (Pentateuch or Torah ). The Samaritan Pentateuch is written in its own Samaritan script , which is based on the ancient Hebrew script , which developed from the Phoenician alphabet . (Today's Hebrew script, however, is originally an Aramaic script that was only adopted by the Jews during their Babylonian exile ). In addition, they have received their own tradition and pronunciation of their scriptures and the ancient Hebrew language, a treasure trove for biblical scholars and linguists.

The prophetic books of the Jews were of no importance to these Samaritans. They were of the opinion that the Jews, the descendants of the southern empire, had developed away from the old Israelite conception of God, especially during the Babylonian exile. The Samaritans accused the Jews of assigning human characteristics to the God of Israel (OT prophetic books). This would have made them an image of God and would violate God's commandments.

The Samaritans have preserved many ancient customs, which they sometimes trace back to the time before the Babylonian exile. For example, they still know the high priesthood and animal sacrifice and celebrate their New Year in spring, not like the Jews in autumn.

The Samaritans have their own high priest who resides on Mount Gerizim .