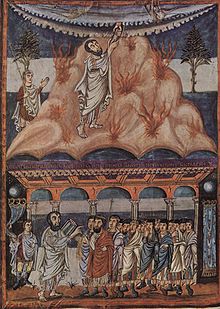 Joshua and the Israelite People, Carolingian book illumination, around 840

The book of Joshua , also called Yehoshua or Joschua (from Hebrew יְהוֹשֻׁעַ, Yehoshua ) is the sixth book of the Tanach and the Old Testament of the Christian Bible . It describes the conquest and early settlement of Canaan by the Israelite tribes from the time after the death of Moses to the death of Joshua. It has been divided into 24 chapters since the Middle Ages .

Moses receives Giovanni Lanfranco , the spy returning from Canaan , around 1620 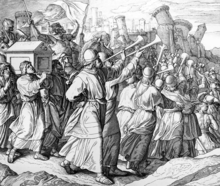 The book of Joshua is named after the Ephraimite Joshua, son of Nun . Joshua is portrayed as a servant of Moses , who was later appointed as his successor and army leader ( Ex 33.11  EU ; Dtn 34.9  EU ; Jos 1.1f  EU ). The name of the author is unknown, but he is closely related to the Torah . The Torah is explicitly mentioned in Jos 1,8  EU Jos 8,31  EU , Jos 8,34  EU , Jos 23,6  EU and their theological conception is continued. The connection is so close that some researchers have combined the Torah and the Book of Joshua to form the Hexateuch . The book of Joshua follows on from the story of the Torah and reports the entry into the Promised Land , the end of the desert migration and the division of the land among the tribes. The book even suggests the continuation of the Torah through Joshua in Jos 24.26  EU .

Rough structure with emphasis on important chapters and verses

The book of Joshua has three main parts.

Chapters 1–12 describe the Israelites crossing the Jordan and conquering the West Bank. Several aetiological sagas are contained in these chapters . They can be recognized by the final wording “until this day”.

Chapters 13–21 describe in detail the distribution of the land among the twelve tribes of Israel . The diverse information can be recognized on the basis of further evidence as a historically reliable description of the settlement areas of the individual tribes, some of which are from a later time. The desert hike has thus reached its destination with the “land in which milk and honey flow”. All tribes, clans and families get their share of the land, even the Levites , who do not have their own land, are assigned their homes.

Chapter 22 EU concludes with the return of the men of the Eastern tribes to their tribal areas. In 23 EU and 24 EU there are detailed speeches by Joshua and the renewal of the covenant on Shechem .

First of all, in retrospect, it is mentioned that Joshua put Ai and Jericho under the ban (v. 1). What is banned plays an important role in the Adonai war tradition: Behind this is the idea that the cities to be fought are banned for Adonai, i.e. that they belong to him (cf. Jos 6:17).

Gibeon plays a key role in the chapter. Elsewhere it is the city of Saul par excellence. Messengers are sent from Gibeon to Gilgal (camp of the Israelites) because Gibeon had previously made a peace alliance with the Israelites. In the event of war, support is now requested from the federal partner (v. 6), which Joshua also accepts (v. 7).

In v. 8 Adonai speaks explicitly to Joshua, which is surprising for the reader, since he had not played a role until then, but rather it seemed to be about worldly alliances and not about an Adonai war. Joshua orders a night march uphill through rough terrain. The enemies are terrified of God, which traditionally comes from the Exodus and David tradition (cf. Ex 14.24; Ps 18.8.15 - in Ps 18 connected with cosmic events such as earthquakes etc.). In v. 10, for grammatical reasons (the last-named subject), Adonai is the subject of the hit (ie: Adonai hits her), which is in tension with v. 40, in which Joshua is explicitly made the subject of the hit. More people die from the hail sent by God than from the sword of the Israelites (Hail Battle of Aseka). The sun and moon are sung about as the song of victory (v.12f), which is neither content nor geographical, but rather reminds of the temple dedication prayer (1 Kings 8:12). At the end of this section it is emphasized again that Adonai fights for Israel (v. 14).

In v. 16 the five kings flee, who actually already fled in v. 11, which is why this seems to be about something new. That Adonai gives the enemy into Israel's hands (v. 19), which takes up Adonai's promise from v. 8. The different names of the people are also striking. In v. 21 it is called in Hebrew haam, whereby it was designated as goj in the song of victory (v. 13). “All enemies” from v. 25 recalls “all enemies” from Ps 18: 1.

It is crucial that in the whole story Joshua does not beat Jerusalem because this is literarily reserved for David. In every conquest narrative, the complete extinction is described (“everything that is alive / breathed”, v. 40) in order to stay within the framework of the ban concept. Overall, Joshua conquered Judah. The detailed description of the conquest of Gibeon is related to the fact that Gibeon pars pro toto stands for the expansion into the northern Reich area.

In the Septuagint , the Greek translation of the Hebrew Bible, the name Yehoshua is transliterated from Aramaic Yeschua / Yeshu as Jesus (Ἰησοῦς, Iesous) .