The first book of Samuel (abbreviated as 1 Sam ) is a biblical book of the (Jewish) Tanach and the (Christian) Old Testament . Originally, and in the Tanakh to this day, 1 Sam and the 2nd book of Samuel form a unit, the book of Samuel ( Hebrew סֵפֶר שְׁמוּאֵל sēfer š e mûɂēl ). Its name goes back to the fact that it was written by Samuel according to Jewish tradition . In the Septuagint (and consequently in the Eastern Churches) it says the First Book of Kingdoms. The Septuagint version of this book is considerably shorter in some places than the current Hebrew version, which indicates that the Hebrew text was late in attaining its final form. Since Stephen Langton , the book of 1 Samuel has been divided into 31 chapters. 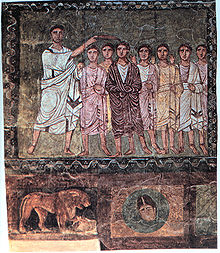 Samuel and David , wooden panel of a synagogue in Dura Europos, Syria

Book 1 of Samuel tells the story of Israel from childless Hannah's request for a male descendant, through the birth of the prophet Samuel, to Saul's suicide and the death of his sons in the fight against the Philistines . There is a parallel to the last chapter in Book 1 of the Chronicle (1 Chr 10,1-12).

A main focus is the emergence of kingship and the ambivalence towards it (1 Sam 8-12). Especially in (1 Sam 8: 11-18 GNB ) the disadvantages of kingship are clearly stated , in (1 Sam 10.19 EU ) the desire of the people of Israel for a king is interpreted as an apostasy from God. In 1 Sam 11 Saul is then elected as king, and in 1 Sam 13–31 the rule of this first king is described. After some initial successes of Saul, the descriptions are shaped by the competition between Saul and his opponent David, who is favored by God. Saul's own family members also take sides with David. Saul's daughter Michal loves David (1 Sam 18:28), and Saul's son Jonathan intervenes on behalf of David and warns him about his father (1 Sam 19: 2-3).

Hanna's Infertility and the Birth of Samuel (Chapters 1-3)

The first chapter tells the story of Hanna's infertility. The second chapter introduces the sons of Eli , and chapter three describes Samuel's calling.

The Loss and Return of the Ark (Chapters 4-7)

Chapter 4 describes the loss of the drawer. Chapter 5 describes God's actions against the Philistines after the ark was stolen. In this chapter God punishes the Philistines with plagues for stealing the ark. In the sixth chapter the Philistines sent the ark back to Israel for fear of God.

In chap. 16 and 17 describes David's coming to Saul's court, in chap. 18 his rivalry with Saul. In chapter 16 David comes to the court of Saul as a musician and in chapter 17 he defeats the giant Goliath . Chapter 18 describes his military victories.

In chap. 28 describes Saul's encounter with the Necromancer of Endor . Since he cannot learn God's will by lot, he secretly goes to the necromancer of Endor. This calls for him the spirit of Samuel, who foretold Saul's death. In chap. 30 tells of David's victory over the Amalekites . In chapter 31, Saul's son Jonathan dies fighting the Philistines and Saul takes his own life.