The second book of Samuel is the second part of the book of Samuel in the Tanakh . It has been divided into 24 chapters since the Middle Ages . In the Eastern Churches it is called Second Book of Kingdoms.

The prophet Samuel appears only in 1 Samuel ; the two books of Samuel were once a single book , and so the parts kept their names after being separated for convenience (manageable size of a scroll ). Rather, the main character of this book is David . The book shows many parallels to Book 1 of the Chronicle . In contrast to this, however, it is noticeably more critical and focuses more on the political events than on the cult . In addition to the narratives, there are also psalms (2 Sam 1: 19-27: David's lamentation against Saul and Jonathan ; 2 Sam 22: David's song of thanksgiving (= Ps 18, 1–51); .

At the beginning of the second book of Samuel, David is brought the news of the death of Saul and his sons, whereupon he has the messenger killed and sings a lament for Saul and Jonathan . Then David is crowned King of Judah in Hebron and Abner , Saul's captain, crowns Ish-Boscheth , the son of Saul, king of Israel . Thereupon the war between Judah and Israel breaks out, from which David emerges victorious and the power of Judah increases more and more. Eventually Abner defected to David and made a covenant with him that he would bring the tribes to David's side. However, Abner is killed by Joab , David's captain. In the following, Isch-Boschet is also murdered, whereupon David has his murderers killed.

David as king over all Israel (chapters 5-6) 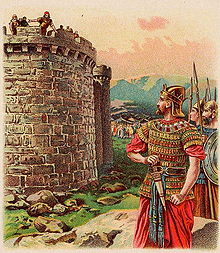 David becomes king over all Israel (illustration of a Bible map, 1896)

David is crowned king over all Israel in Hebron and conquers Jerusalem from the Jebusites . Shortly afterwards the Philistines marched against Israel and David defeated them with God's help. After defeating the Philistines, David brings the Ark of the Covenant from Baala to Jerusalem. This event is accompanied by song and dance. The ark does not arrive in Jerusalem at first because Usa touches it and is then killed by God. For this reason, the ark is first brought to the Obed – Edoms house . When this house was then blessed, David brought the ark to Jerusalem singing and dancing. When Michal , his wife, complains about David's behavior, she is punished with childlessness. 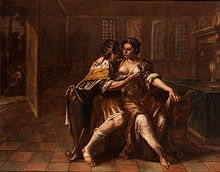 God speaks to David through the prophet Nathan and tells him that his kingship will last forever. However, David should not build a temple as he wished, but his son first. This promise is followed by accounts of David's wars and victories, and his officials are enumerated. In the following it is reported how David brought the son of Jonathans Merib-Baal to his court. In addition, the war against the Ammonites is reported, which ends with the flight of the Ammonites. The Arameans also flee from David. When the war was still going on, but David was in Jerusalem, he slept with Bathsheba , a married woman, and she became pregnant. Thereupon David has her husband Urija brought out of the war. When he doesn't want to sleep with his wife, David sees to it that Uria is killed in the war. Because of David's deed, God sends the prophet Nathan to David, who announces a punishment for him. Davis then realizes his mistake, but David and Bathsheba’s child dies. But Bathsheba becomes pregnant again and gives birth to Solomon . Finally, it is told how David took the capital of the Ammonites.

The story of Absalom follows . His sister Tamar is raped by Amnon , her half-brother. Absalom then takes revenge and has Amnon killed. David is appalled and Absalom flees to Geschur . After three years, with the help of a clever woman, Joab succeeds in convincing David that he will allow Absalom to come back to Jerusalem. In the following, Absalom succeeds in building a following. Then he tells David that he wants to go to Hebron to fulfill his vow. David lets him go from Jerusalem with 200 followers. Once in Hebron, Absalom is proclaimed king. When David found out, he fled Jerusalem with his house and entourage and Absalom moved into Jerusalem. David and his entourage flee across the Jordan to Mahanajim. From there, David goes to war with Absalom, but orders his generals to spare Absalom. During the fight, Absalom, riding a mule, remains hanging with his hair in a tree. This is reported to Joab, who then kills Absalom. Absalom's followers flee after his death. The news of the end of the war is then brought to David, who first asks whether his son is okay and when he hears the news that Absalom is dead, he mourns him. After Absalom's death, David moves back to Jerusalem with his entourage.

The following is an account of the uprising of Sheba against David. When David heard of this, he sent Joab and his men to pursue Sheba. This is followed by the murder of Amasa by Joab and the death of Sheba by beheading. Then David's officials are listed again. The following is an account of seven of Saul's descendants who were killed to pay the house of Saul's blood debt to the Gibeonites. David buries the dead next to Saul and Jonathan. Then the war against the Philistines and the heroic deeds of David's warriors are reported. After the victory, David sings a song of thanks. This is followed by David's last words and a list of David's heroes . At the end of the second book of Samuel there is an account of David's census, whereupon God punishes the people with the plague. Thereupon David builds an altar at the place where the temple will later stand. Then the plague disappears from the country.