Leaves of a magnolia

Daffodil foliage under the compost heap in late March

The chlorophyll (from ancient Greek χλωρός Chloros "light green, fresh" and φύλλον phyllon "leaf") or leaf green refers to a class of natural dyes , which are formed by organisms that photosynthesis operate. Plants in particular get their green color from chlorophyll.

Chlorophylls are molecular structures called chelate complexes , consisting of a derivatized porphyrin ring and Mg 2+ as the central ion. In contrast to the porphyrin, the basic structure of the chlorophyll contains a further, fifth ring on ring III (numbering according to Fischer). Depending on the type of chlorophyll, different side chains are attached to the base body. For example, chlorophyll a is esterified with phytol (see table). Chlorophyllides are chlorophylls without side chains.

The chlorophylls are structurally related to the heme , which occur as a component of the blood pigment ( hemoglobin ), myoglobin and cytochromes , but as a central ion do not contain magnesium but iron . Chlorophylls are readily soluble in ethanol and acetone , as well as similar solvents. If photosynthesis takes place in organisms that release oxygen (oxygenic phototrophs ), one generally speaks of chlorophyll . However, anoxygenic phototrophs do not produce oxygen as a reaction product during photosynthesis, in these organisms the chlorophyll is called bacteriochlorophyll .

Hans Fischer determined the molecular structure of chlorophyll in 1940, the absolute configuration was determined by Ian Fleming in 1967 .

a : No double bond between C7 and C8 (marked in color in the picture)
b : Bchl c , d and e is a mixture of isomers in which the radical R 3 or R 4 is differently substituted.

Yellow light, wavelength around 580 nm, is transmitted almost completely by the chlorophyll solution.

A simply built absorption spectrometer can be used to measure which light is particularly strongly absorbed by chlorophyll. In this example, the aperture is placed so that yellow light falls into the cuvette with the chlorophyll solution. The amount of yellow light emerging on the other side of the cuvette hardly falls below the amount of incident light, because hardly anything was absorbed by chlorophyll in the range of these wavelengths. If you move the diaphragm so that red or blue light penetrates, the detector behind the cuvette measures a significantly lower emission.

The absorption spectra of in solvents dissolved chlorophylls always possess two distinct absorption maxima of between 600 and 800 nm, as the Q y - band is referred to, and one at 400 nm, the Soret band is called. The figure on the right shows these absorption maxima for chlorophyll a and b . In addition, there is the Q x band around 580 nm, which is polarized perpendicular to Q y and, as a rule, absorbs very weakly. For chlorophyll a it can still be seen in the figure, for chlorophyll b it disappears underground. The area between the bands is called the green gap .

Structure of the antenna complex LH2 of a purple bacterium. The BChl are shown in yellow (B800) and orange (B850). For the sake of clarity, the phytyl tails were not drawn and the protein environment was shown transparently. The magnesium atoms in the center of the BChl are shown as spheres.

The absorption depends on the solvent and accordingly the position of the absorption maxima can vary by a few nanometers depending on the type of solvent. In the natural environment of chlorophylls, i.e. the protein environment, things are different. Here the position of the absorption maxima depends on two factors: (1) Depending on the partial charge of the surrounding amino acids and the bending of the side groups of the chlorophyll molecules, the absorption maxima can be at very different wavelengths. (2) In proteins, chlorophylls come very close to one another, so that they interact with one another ( dipole-dipole interaction ; at very short distances, also exchange interaction ). This interaction leads to a lowering of the energy level and thus to a redshift of the absorption maxima. This can be seen particularly impressively in the example of the antenna complex LH2 of purple bacteria. The LH2 complex consists of two groups of bacteriochlorophyll molecules arranged in a ring (see figure on the left). The upper ring (B850) contains 18 BChl a molecules, which are very closely spaced, i.e.  strongly coupled. The lower ring (B800) consists of 9 BChl  a molecules, which are significantly farther apart and are therefore much more weakly coupled.

There are several types of chlorophyll that differ in the side groups of the porphyrin. They have different absorption spectra and occur in different phototrophic organisms: 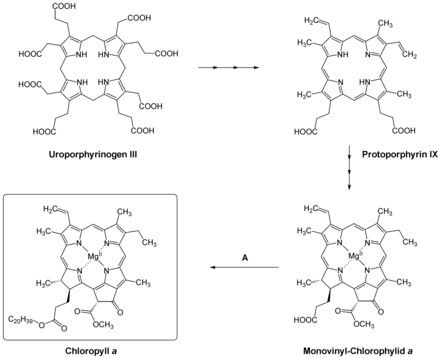 The synthesis of this and other tetrapyrroles is a multi-step process that also has various branch points. The biosynthesis starts from L - glutamate and ends in a siroheme -, a heme - and a chlorophyll branch.

After several steps, uroporphyrinogen III is formed from L- glutamate , the first branching point from which sirohem can be formed. Uroporphyrinogen III is then converted into protoporphyrin IX in three steps , which is the second branching point to the heme. The magnesium ion is introduced into protoporphyrin IX in an ATP-dependent reaction, which catalyzes a magnesium chelatase ( EC 6.6.1.1 ). The Mg-protoporphyrin IX formed in this way is converted via Mg-protoporphyrin IX monoethyl ester to dinvinyl protochlorophyllide a . That step is catalyzed by a cyclase that introduces the fifth ring into chlorophyll. In plants this enzyme is O 2 -dependent, while in prokaryotes there are both O 2 -dependent and O 2 -independent cyclases.

Chlorophyll b can also be formed from chlorophyll a or vice versa.

The breakdown of chlorophyll in deciduous trees produces a characteristic color of the leaves in autumn. Chlorophyll is metabolized to chlorophyllide by the chlorophyllase . This is followed by an ion exchange by the Mg 2+ - Dechelatase to pheophorbide . Pheophorbide is oxidized by the pheophorbide A oxygenase with the cofactor ferredoxin , whereby the green color disappears and various fluorescent degradation products (FCC, from English fluorescent chlorophyll catabolites ) and, in the further degradation, non- fluorescent substances (NCC) are formed. In Maple Chlorophyll is another pathway to Dioxobilan dismantled.

Chlorophylls have several tasks within photosynthesis in photosystem I and photosystem II . By far the largest share is used for light absorption and the transmission of the absorbed energy. So they act as photosensitizers . For this purpose, the chlorophyll molecules are organized in light-collecting complexes , which are arranged in such a way that, on the one hand, the largest possible absorbing surface is formed and, on the other hand, an energetic funnel is created that guides the absorbed energy to the so-called reaction center . In the reaction center, two chlorophylls serve as acceptors of this energy. They are so specially arranged that their excitation leads to a charge separation, which can be regarded as the first step in photosynthesis itself. This chlorophyll pair is called a special pair in English .

There are many differences in the structure of the light-harvesting complexes in the very different organisms that drive photosynthesis, but the reaction center is always almost the same. In plants, algae and cyanobacteria, the special pair is always formed by chlorophyll a , and in bacteria by various bacteriochlorophylls.

With the E  140 label , chlorophylls ( CI Natural Green 3 ) are approved as food coloring .

The first descriptions of a “ dye ” that can be extracted by ethanol (“wine spirit”) and decomposed under the influence of light can be found in Heinrich Friedrich Link's book “Grundlehren der Anatomie und Physiologie der Pflanzen”, Göttingen 1807. There are also ambiguous ones Evidence that Joseph Louis Proust described the green dye as "Fécule". Pierre Joseph Pelletier and Joseph Bienaimé Caventou extracted the substance again and named it chlorophyll . The first studies on the chemical structure of chlorophyll come from Richard Willstätter (1913). The chemist Hans Fischer resumed Willstätter's research in the 1930s, and in 1940 he was able to clarify the structure of the molecule. Fischer's research was confirmed in 1960 by Robert B. Woodward's chlorophyll synthesis. Even before Woodward, the total synthesis succeeded in a somewhat different way by a group of chemists at Fischer's former place of work, the Technical University of Munich. Fischer's former colleagues Alfred Treibs and Martin Strell continued his work there on the total synthesis of chlorophyll. The goal of both groups was the synthesis of pheophorbide a , since Willstätter had already described the residual synthesis based on this.

An important property of chlorophyll is chlorophyll fluorescence . It is mainly used to determine the chlorophyll content and its activity as well as for other scientific analyzes.

Because of its odor-neutralizing effect, chlorophyll is also available in tablet form in pharmacies, as a remedy for bad breath and body odor.